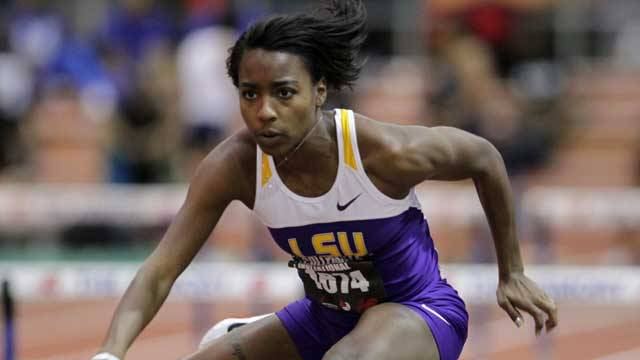 BATON ROUGE – LSU’s former All-SEC hurdler Tenaya Jones climbed the medal podium as a member of Team USA for the first time when she raced to the finish line in 12.84 seconds to win the silver medal in the final of the women’s 100-meter hurdles during Tuesday’s competition at the 2015 Pan American Games being held this week in Toronto, Canada.

After winning her semifinal heat earlier in the day with a wind-aided 12.81 (+2.6), Jones made it a clean sweep of the gold and silver medals for the United States when she clocked a wind-legal run of 12.84 (+1.4) in the final to trail only teammate Queen Harrison to the finish line as Harrison struck gold with a personal best of 12.52.

Jones edged Canadian Nikkita Holder at the finish line for the silver medal by the narrowest of margins as Holder won the bronze medal for the host nation in the sprint hurdles with a time of 12.85.

A three-time All-SEC hurdler with the Lady Tigers during her four-year collegiate career from 2008-11, Jones continued her outstanding outdoor season in 2015 that has also featured a sixth-place finish at the USA Track & Field Championships held at Oregon’s Hayward Field in Eugene on June 27 when she clocked a time of 12.89 in the national final.

It was her performance at the USATF Championships that earned her a selection on Team USA for the Pan Am Games as she also posted a personal-best time of 12.72 in the semifinal round back on June 26.

Former Lady Tiger national champion Kelly-Ann Baptiste has also shined for her native Trinidad & Tobago at this year’s Pan Am Games after she claimed a fifth-place finish in the final of the women’s 100-meter dash on Wednesday afternoon with an 11.05 (+0.9) clocking. That performance matched her wind-aided run of 11.05 (+2.5) to win the first of two semifinal heats earlier in the day.

Jamaica’s Sherone Simpson was crowned the 2015 Pan Am Games champion in the women’s 100-meter dash as she ran 10.95 to edge Ecuador’s silver medalist Angela Tenorio (10.99) at the finish line for the win. Team USA’s Barbara Pierre bagged the 100-meter bronze medal in 11.01, while Baptiste also trailed Brazil’s fourth-place finisher Rosangela Santos (11.04) in the final.