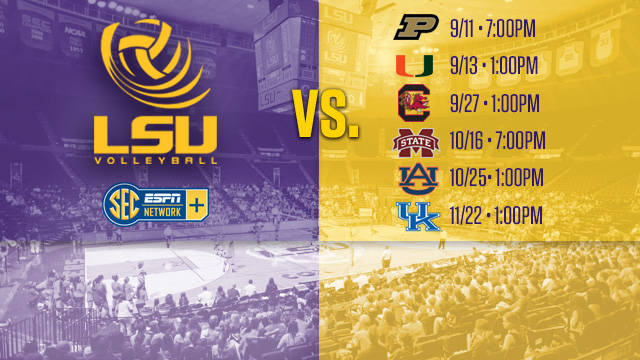 BATON ROUGE – Fans of the LSU volleyball program will be able to see every home match live as it was announced on Thursday that the remaining six home games of the team’s 2015 campaign that were not picked up nationally will be streamed live online via SEC Network+ through the WatchESPN app this season.

Last week the Southeastern Conference announced the broadcast schedule for both the SEC Network and ESPNU, as the two networks will feature the Tigers a combined nine times in the upcoming year, which included five home games. With the announcement of the SECN+ schedule, a pair of non-league matches, as well as four more conference clashes will now be added.

Both games of LSU’s tournament kick off the streaming schedule, as the team takes on Purdue on Sept. 11, closing the event two days later with the Miami Hurricanes Sept. 13.

The last four games will all feature conference foes beginning with the South Carolina Gamecocks on Sept. 27, at 1 p.m. A Friday night clash with Mississippi State is set for Oct. 16, with the season series finale against Auburn set for 1 p.m. on Sunday, Oct. 25.

The final home game in the Pete Maravich Assembly Center on Sunday, Nov. 22, is set for 1 p.m. and will feature a battle against the Kentucky Wildcats to close out the home portion of the schedule.

As the season gets closer, any road matches selected for air on SEC Network+ will be added to the schedule page at LSUsports.net.