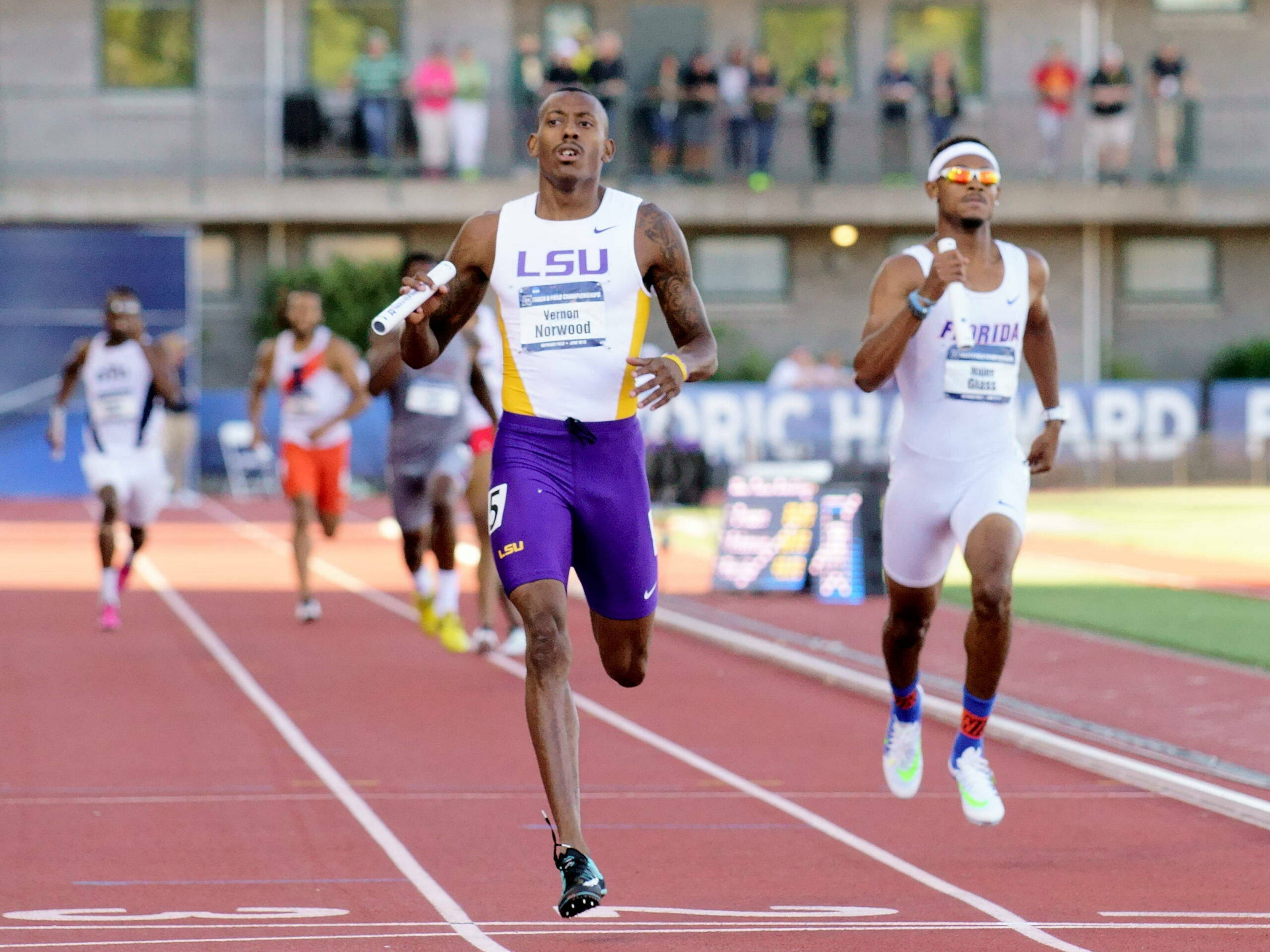 The winners for various special awards were voted on by the SIDs of the various four-year schools in the state based on nominations provided. Sports Information personnel could not vote for athletes from their own schools. The top times list was based on information provided by the nation’s Top 500 times and verified by the various schools.

Norwood not only swept the NCAA titles in the 400 meters, but also anchored the winning 4X400 meter relay team at the outdoor championships. The senior from Morgan City clocked in at 45.31 in the indoor final and 45.10 in the NCAA outdoors. Norwood ran a personal best of 44.44 to win the 400 meters at the LSU Alumni Gold meet and was No. 5 in the World rankings for the 2015 outdoor season.

Brown was the top-ranked discus thrower with a season and personal best mark of 213-5, winning the Penn Relays with that throw to go with titles at the SEC Outdoor Championships and the Texas Relays. The senior from Chappell Hill, Texas won eight discus titles in all in his final season and was ninth in the discus final at the NCAAs

Southeastern’s King, the state’s freshman honoree from Kentwood, posted Louisiana’s best pole vault performance to win the LSU Alumni Gold meet with a leap of 17-7. King qualified for the NCAA Outdoors where he finished 18th in the East Preliminary. In all would win five pole vault competitions in his first season.

Young of Southeastern also earned Southland Conference newcomer honors to go with his state honors. The junior from Nashville represented SLU in the NCAA Championships in the hammer throw, finishing 10th in the outdoor and 15th in the indoor championships. He also won the SLC outdoor title in the shot put. Young had the best shot-put performance and the third-best hammer throw in the state this season.

Shaver, in his 11th season as head coach, took the Tigers to a fourth-place finish in the NCAA outdoors and seventh place indoors with 16 All-America honors. The Tigers won three NCAA titles. LSU sprinters, hurdles and relay teams accounted for all 64 points at the two NCAA meets combined in 2015.

On the women’s side, Hobbs was the only double winner as track athlete and freshman of the year after her opening year as one of the NCAA’s leading sprinters in 2015. The New Orleans product was an NCAA finalist in the 100-meters, earning sixth place All-America honor in the NCAA outdoors after posting a personal best of 11.13 in the semifinals to earn spot in the finals. She also earned A-A honors as the second leg of LSU’s 4X100 relay that finished fifth at NCAAs.

On the field side, Bliss posted second in the shot put in the NCAA indoors (60-7.25) and third in the NCAA outdoors in the event (58-6). She posted 60-1 to win the SEC indoor title and broke her own outdoor school record with a career-best throw of 60-8 at the LSU Invitational.

Newcomer Vodova from Tulane transferred in from east Tennessee State for her senior season. She scored a total of 12 points for the Wave at The American outdoor championships, claiming second in the long jump (19-11) and fifth in the pole vault (12-10.25) and she competed in both events at the NCAA Regionals.

Coach Moses of Xavier was named the Gulf Coast Athletic Conference Coach of the Year in leading the Gold Nuggets to the GCAC women’s team championship for the third consecutive year and the fourth time in five years. Moses had qualifiers for the NAIA outdoor championships in four events and had two athletes who were CoSIDA Academic All-Americans.

Here is the list of state’s best times for men and women based on information from the Top 500 national times and provided by the school track and field SIDs: