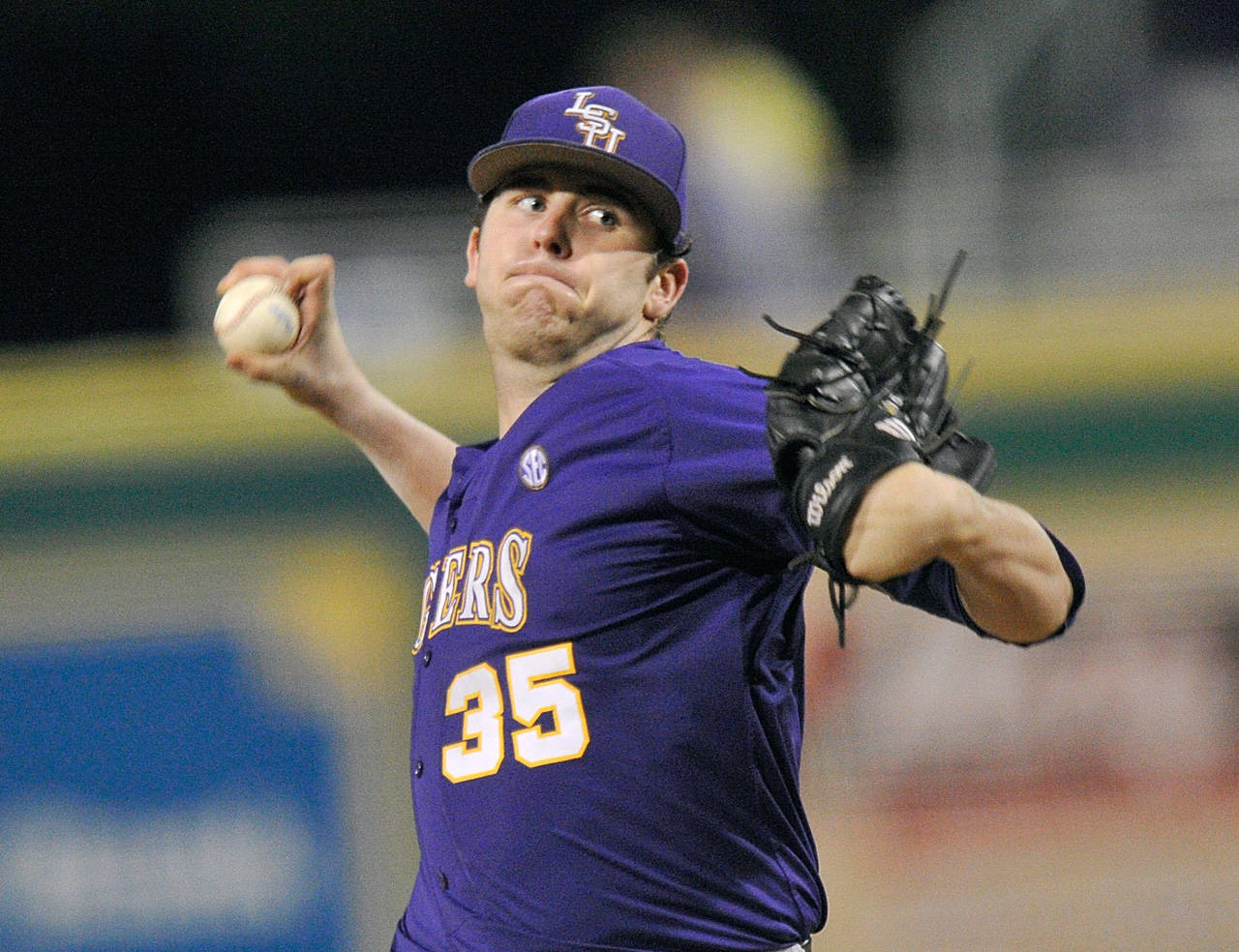 BATON ROUGE, La. — With his 119th pitch at 1:09 a.m. CT Sunday, SEC Freshman of the Year Alex Lange earned his 12th strikeout in a complete-game shutout that put the LSU baseball team in the NCAA Regional final, 2-0, over UNC Wilmington.

Lange (11-0) stood at the edge of the mound, raised his arms to the sky and listened as the crowd roared in celebration.

Hours earlier, the same sky opened in the bottom of the fifth inning of NCAA Regional game 3 and caused a three-hour, 16 minute rain delay. The start of LSU and UNCW was pushed from 8 p.m. to 10:15, but it didn’t keep the LSU faithful away.

LSU (50-10) advanced to the winner’s bracket final on Sunday at 7 p.m. CT when the Tigers will meet the winner of the 3 p.m. elimination game between No. 2-seeded UNCW and No. 3 Tulane.

“Well, obviously Alex Lange showed why he’s a first-team all-American, first team all SEC, freshman of the year in the SEC, should be national freshman of the year, might be national pitcher of the year, and he doesn’t care at all about those kind of things,” said LSU coach Paul Mainieri. “All he cares about is winning and helping his team. He’s the next in the long line of humble superstars that we’ve had around here, guys that just care so much about the team more than anything else. But man, what a performance!”

“Definitely, every pitch wasn’t working tonight,” Lange said. “The beginning of the game was a battle. I felt like I grew up tonight during the game. I was missing spots at the beginning, walking guys, giving up hits, leaving balls up, but I was able to pitch out of some jams. Defense picked me up great like they’ve done all year, and we were able to manage to stretch a couple runs across. I’m just really thankful for that.

“But it was a battle. I had a lot of reflecting to do in the dugout and try to figure stuff out, but in the end I came through with it and figured it out.”

The Tigers scraped across single runs in the top of the seventh and ninth innings to give Lange just enough breathing room. After midnight, LSU finally found success against UNCW starting pitcher Evan Phillips in the seventh.

Catcher Kade Scivicque hit stand-up double off the left-center field wall before Andrew Stevenson ripped the first pitch he saw through the right side to put runners on the corners. Chris Chinea hit the next pitch from Phillips to right, scoring Scivicque and sending Phillips to the dugout.

Phillips (2-2) took the loss despite giving up only one run on eight hits with three strikeouts and no walks. He was lifted in favor of hard-throwing Jordan Ramsey, who allowed singles to Stevenson and Jake Fraley in the ninth before giving up a run on an RBI groundout by Jared Foster.

Stevenson (3-for-4) and Fraley (2-for-4) had the only multi-hit performances for LSU, which hit the ball sharply but struggled to find the gaps in the Seahawks solid defense.

LSU played error-free defense of its own, including a leaping catch by Mark Laird near the top of the wall to prevent an extra-base hit by UNCW catcher Gavin Stupienski (2-for-4) to open the bottom of the sixth inning in a scoreless contest.

Lange, who became the first LSU freshman to record 100 strikeouts in a season, worked around a leadoff single by ending the bottom of the ninth with three-straight Ks.

All times Central and subject to change