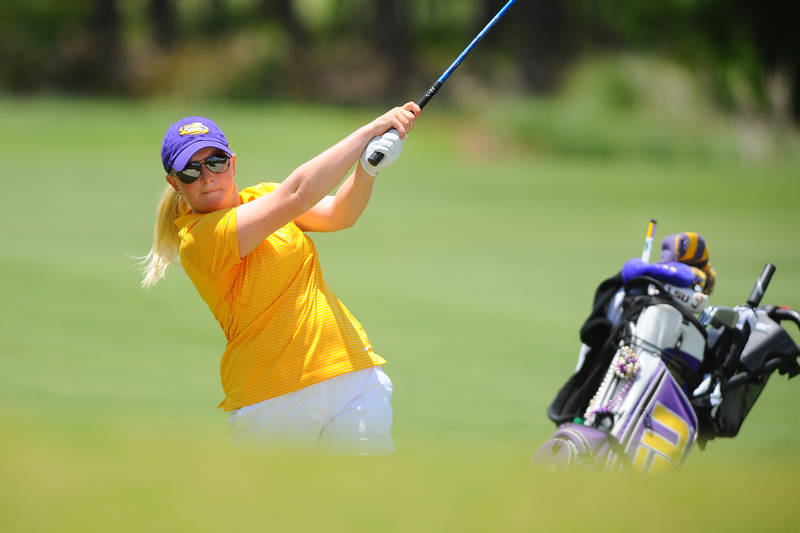 The only problem there was nearly an hour lightning delay between them.

Nistrup birdied the par 4 16th hole and was standing on the tee at 17 ready to hit when horns sounded for the fourth consecutive day on another steamy afternoon. There was no rain and the threat passed and the teams were put back on the course to finish.

Nistrup then hit two spectacular shots to the front of the 17th green and despite a huge break in her first putt, two putted for birdie and what would be a round of 2-over 74.

The Denmark native was one of nine players invited back to play for the individual title along with the players on the top 15 teams after Sunday’s round that were trying to advance to the top 8 for team match play on Tuesday.

With Golf Channel cameras rolling, teams took advantage of seemingly easier pin placements and showed the shot making that has become the norm in the women’s game.

Nistrup was a little slow out of the box with bogies on the first, fourth and ninth, but the seemed to get going on the 10th when she turned a tee ball up against the lip of the bunker into a par four.

“It was definitely not my best day,” Nistrup would say when summing up the round. “I couldn’t really get the driver going or my approach shots. I had some good saves on the front nine. I missed some short putts that was a bit annoying. It was nice finish getting birdies on two of the last three.

“The bunker shot I was under the lip on 10 so I didn’t know where it would go when I hit it so I just decided to try and hit it and it went a lot further than I expected. I had a tough chip but it turned out really well and got the par. After the delay, we’ve kind of gotten used to coming back out there. It’s so hot you don’t really cool down so I was ready to go when we started back.”

For Nistrup, who has played several events for her country, the NCAAs just adds to a list of college distinction including two-time first-team All-SEC.

“It’s been a big learning experience,” she said. “It’s a very tough golf course and you have to stay in the moment throughout the round. It’s tough, mentally. It’s really a good experience for my future in college and in later years.”

“I think her energy was really low at the beginning of the round,” said LSU Coach Karen Bahnsen. “I think the heat was just zapping it out of her. She wasn’t striking it her best. She picked up a lot of momentum off that unbelievable bunker shot on 10. It was a terrible lie. That kind of picked her up and she just played fantastic on the way in.

Her career at LSU her first two years has been stellar,” Bahnsen said. “For her to get her first win earlier in the year was big for her and just trying to build on that. She’s a really smart player and that goes a long ways. She’s a little fighter.”

The team will fly back to Baton Rouge Tuesday evening and Bahnsen has some take aways from her 12th time to take a team to the championships with four players returning for next season on the NCAA lineup.

“I think it was a huge learning experience for the team,” Bahnsen commented. “Obviously we didn’t play well. I think we got a little tight when it came to the tough conditions of the golf course. But they’ve experienced that now and hopefully they have learned from all that. I see a lot of positives coming out of all of it.”

It was a wonderful site to see “Folds of Honor” plaques on each tee box Monday on Memorial Day remembering service men and women who have lost their lives service our country. Also championship flagstick throughout the course on each green flew the American flag and on the 18th hole, military personnel were on the green to pull and replace the flag at the appropriate moments.

After Sunday’s final team round, I asked Coach Bahnsen what advice she might offer to the men’s coaching staff that will be arriving here in a day or so with their practice round scheduled for Thursday for the men’s championship.

“I highly recommend that they don’t just look at the pin placements, but like I did (Sunday morning) go out and scout it. Even though we didn’t play well, it was huge to see and get an eyeball of what those pin locations are. You think you can look at the pin placements and know in that one practice round where you can hit it, but you don’t. So you need to go out there and look at it and say you hit it here. Basically you landing zone is a table top size, so that’s not much room for error. You got to be able to trust it and avoid some big numbers. Sometimes you have to play a little bit conservative and we’re an aggressive team and that was a little tough for our team.”

On senior Madelene Sagstrom, who received the traditional senior bouquet of flowers from the LSU Coaches after the round, Bahnsen said: “Fantastic career. I’m so proud of watching her grow and mature as a young woman. The growth she showed as a player this year, her maturity came through. I hate it for her that she had a bad week this week. I think she put a lot of pressure on herself, but that’s understandable. I’m so proud of this team. I’m not going to let this week define them.