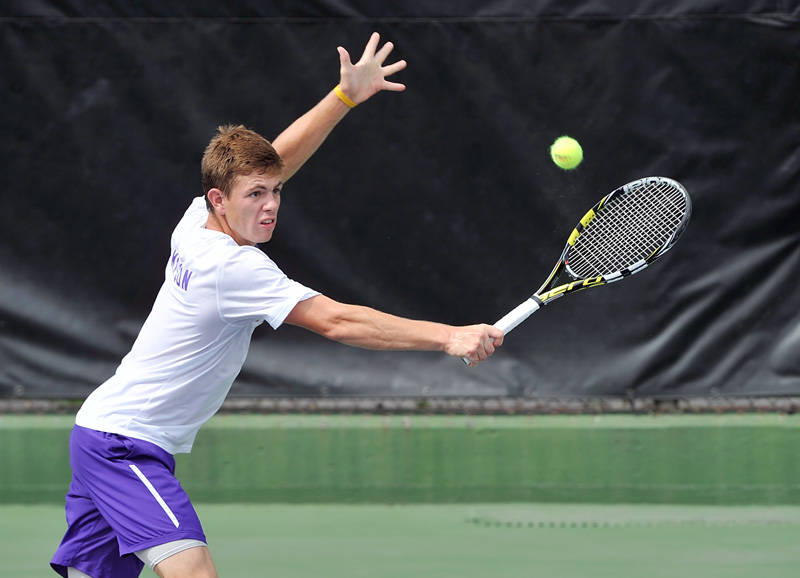 WACO, Texas – In a match that started outside before rain forced the action indoors, the LSU men’s tennis team dominated UTSA by a score of 4-0 on Friday in the first round of the NCAA tourament to earn their first postseason victory since the 2012-2013 season.

LSU (18-8, 6-6 SEC) looked like a well-rested team as they came out of the gate strong with a convincing performance in doubles play against the Roadrunners (17-9). Friday’s match was the Tigers’ first since April 17.

“We did a good job of getting a win against a tough team,” said head coach Jeff Brown. “We were very focused in doubles play and built big leads and finished strong. We were able to carry that focus into singles.”

After winning the doubles point to take a 1-0 lead over the Roadrunners, LSU senior Chris Simpson and junior Boris Arias extended the lead to 3-0 with their victories on courts two and three. Junior Justin Butsch earned the clinch for the Tigers with his victory on court six.

Brown was impressed with his team’s focus given the uncertainty brought on by the weather, especially when dealing with an unfamiliar opponent.

“Neither of these teams are very familiar with each other so we were not sure what kind of affect [the weather] would have,” Brown said. “It was a difficult day. We just controlled what we could and the team did a great job of staying focused.”

With the win, LSU moves to a perfect 3-0 all time against UTSA and earned a berth in the second round to be played Saturday at 5 pm CST. The Tigers will face the winner of the match between No. 2 Baylor and Bryant.

Brown said the team expects a challenge regardless of their opponent and is not intimidated by Baylor’s ranking. LSU feels prepared for the quick turnaround after experiencing matches in back-to-back days earlier in the season at the ITA Kickoff and SEC tournament, Brown said.

“Playing in a conference as tough as the SEC prepares you for this level,” Brown said. “We have won doubles points against some top teams as well as some singles points. We are definitely not intimidated.”