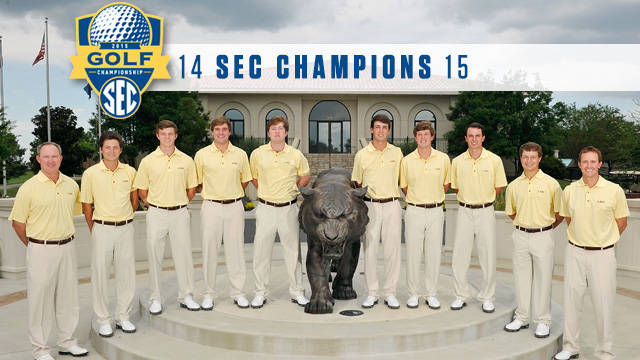 ST. SIMONS ISLAND, Ga. – The No. 7-ranked LSU Tigers lifted the SEC Championship trophy for the first time in 28 seasons on Sunday afternoon as they turned a three-shot deficit entering the day into a three-shot victory with a winning score of 13-under par 827 at the 2015 SEC Men’s Golf Championships held this weekend at Sea Island Golf Club’s Seaside Course.

Not since the sophomore season of the great David Toms in 1986-87 had the Tigers been crowned SEC Champions on the links, but the team of seniors Stewart Jolly and Ben Taylor, junior Zach Wright and sophomores Brandon Pierce and Eric Ricard earned their place in history as the champion golfers of the year for the 2014-15 season.

They claimed the 16th SEC Championship in the program’s history to rank second all-time behind the 26 titles won by the Georgia Bulldogs while snapping Alabama’s run of three-straight wins from 2012-14.

But the 2014 SEC runners-up appeared set for a second-straight silver-medal-winning finish at the championship as they fell five shots behind in second place to both three-time defending champion Alabama and title-challenging Vanderbilt on the back nine. They trailed the Crimson Tide by five shots as groups in the final wave began to make the turn before also falling five shots back of Vanderbilt late in the day.

With Jolly leading the way with a 1-under par 69, Taylor and Wright both firing matching scores of even-par 70 and Pierce adding a 2-over par 72 toward LSU’s team score in the final round, the Tigers took home the title with a total of 1-over 281 in the final round and winning effort of 13-under 827 in 54 holes played at the Seaside Course. The No. 5-ranked Commodores and No. 6-ranked South Carolina Gamecocks trailed three back in a tie for second place at 10-under 830 as each ended with an even-par 280 in the final round.

Rounding out the Top 5 of the final team standings as this year’s SEC Men’s Golf Championships were 15th-ranked Auburn and 25th-ranked Alabama in a tie for fourth place at 7-under par 833.

“It came down to the end, and our guys just kept playing,” said LSU head coach Chuck Winstead of his team’s performance late in the round. “They really outplayed some great teams down the stretch. The course was tougher today, you could see that in the scores. It took a great amount of focus to get through it. They did that and competed very well all the way through the 54th hole.

“The guys are thrilled, and I’m happy for them. They’ve worked hard to achieve something like this and certainly deserve it. We have five guys here who are not just very good players, but they’re all really competitive as a group. When you put our five guys up against some great teams that are here, they’re very competitive and want to take on the challenge of playing in a great championship event like we have here.”

Jolly proved to be a catalyst in LSU’s charge on the back nine as he was the only Tiger to break par in the final round, firing a 1-under 69 on Sunday to tie for fourth place overall at 5-under par 205 for the weekend.

After making the turn at 2-over par for his round with bogeys at the par-four fourth and par-five seventh holes, Jolly ignited a furious finish to the championship when he holed a 4-iron from the fairway on the par-five 15th hole for eagle before carding a birdie at the par-three 17th hole en route to a team-low round of 69 on the afternoon. He cracked the Top 10 of the final SEC leaderboard for the first time in his four career SEC starts with the Tigers as he eclipsed his previous best tournament finish when he tied for 21st place as a junior a season ago.

“It’s huge for us,” Jolly exclaimed following the team trophy presentation. “I couldn’t be prouder of my teammates. We’ve had a good year, and this makes it a great year. I couldn’t be happier. It’s great that we all put it together when it mattered most. This is an awesome feeling.”

Jolly talked about the shot that sparked his outstanding finish to the championship when he holed a 4-iron from 199 yards into the 15th green to level his score at even-par before finishing the day at 1-under.

“I actually hit a bad drive into the fairway bunker, didn’t get a very good lie, so I had to lay it up into the fairway from there,” Jolly explained. “I’ve been hitting my irons pretty well lately, and the pin was back left of the green, so it set up a right-to-left shot shape. It suited my ball flight like I hit it. I had a really good number (yardage), it was a good 4-iron if I hit it correctly.

“Coach (Winstead) and I were both talking to it like, ‘Please be good!’ He was having a little bit of fun saying, ‘Be the right club today!’ It was just perfect. It was the most amped up I’ve ever been on a golf course.”

Jolly was among three Tigers to break into the Top 10 of the final leaderboard following Sunday’s final round at the SEC Championships as Wright followed in a tie for sixth place at 4-under par 206 to claim his best finish in three career appearances and Pierce wrapped up the weekend in a tie for ninth place at 3-under par 207 while making his championship debut with the Tigers.

After firing the lowest round of the weekend for the Tigers with his 4-under 66 on Saturday, Wright closed out a top-10 finish with two birdies and two bogeys for an even-par round of 70 on Sunday to improve his two prior finishes of tying for 36th place at the SEC Championships as a freshman in 2013 and as a sophomore in 2014. Pierce’s 2-over 72 was the final counting score for the Tigers in securing the team title.

Both Taylor and Ricard tied one another for 31st place on the final leaderboard with matching tournament scores of 3-over par 213 for the championship. Like Wright, Taylor canceled out two birdies with two bogeys for an even-par 70 in the final round to match Saturday’s output after opening the tournament with a 3-over par 73 in Friday’s first round.

While making his SEC Championship debut alongside Pierce, Ricard counted a score of 1-under 69 on Friday before adding rounds of 1-over 71 on Saturday and 3-over 73 on Sunday to finish the event at 3-over 213.

South Carolina’s Matthew NeSmith led wire-to-wire in claiming the SEC individual title as he followed rounds of 5-under 65 on Friday and 6-under 64 on Saturday with a final-round 3-under 67 on Sunday to take home a comfortable six-shot victory with a final score of 14-under par 196 for the championship. Auburn’s Ben Schlottman followed six shots back in second place with a 54-hole score of 8-under par 202.

“There are so many people who have helped LSU Golf get back to this level during our time here. I’m happy for all of those who have given us so much support,” Winstead added. “Whether it be alumni, past members of our team, the administration and others, there are just so many people who have played a major part in this. We can’t thank them enough for helping us along the way.”

Their victory at the 2015 SEC Men’s Golf Championships marked the fourth time during the 2014-15 season that the Tigers have been crowned team champions in their 10 tournament starts on the year. They have also claimed team titles at the Golfweek Conference Challenge (Sept. 14-16) and David Toms Intercollegiate (Oct. 4-5) in the 2014 fall season and the Talis Park Challenge (March 15-16) earlier this spring.

It also marks the sixth time in program history and the first time since 2010-11 that the Tigers have won four tournament titles in a single season. They have now claimed 21 team titles in Winstead’s 10 seasons.

With their 16th SEC Championship now in the history books, the Tigers will await their eighth-straight NCAA Regional selection as the field for the 2015 NCAA Men’s Golf Regionals will be announced in just over two weeks on Monday, May 4, from 9-10 a.m. CT on Golf Channel’s Morning Drive program. The 2014 NCAA match play semifinalists look to qualify for the 30-team field at the NCAA Division I Men’s Golf Championships for the fifth time in six seasons by earning a top-five team finish in NCAA Regional competition.