Lady Tigers Climb to No. 7 in Golfweek Rankings 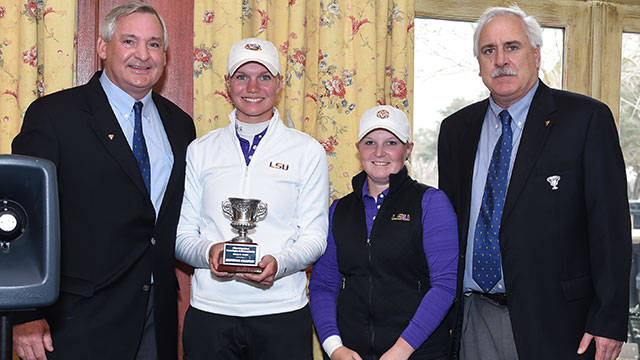 BATON ROUGE – Another release of performance stats, this time by Golfweek and the Sagarin ratings system has the LSU women’s golf team with a huge jump following their win in the Allstate Sugar Bowl Intercollegiate.

The Lady Tigers have won twice this season in the last three tournaments the team has played.

Washington is No. 1 in these rankings with South Carolina second, Southern Cal third, UCLA fourth with Arkansas and Duke the two teams in front of LSU.

Even more impressive is that LSU has three golfers in the top 19 in the Golfweek/Sagarin individual ratings. Senior Madelene Sagstrom of Sweden is ranked ninth, Denmark sophomore Caroline Nistrup is 18th and Elise Bradley, the junior from Mandeville, is 19th in the nation.

Sagstrom and Nistrup tied for the individual title at the Allstate Sugar Bowl and Bradley made one of the nation’s biggest moves in the Golfweek rankings from last year to the end of the fall semester play.

The Lady Tigers are back in action starting on the weekend at the Darius Rucker Intercollegiate in Hilton Head, South Carolina.