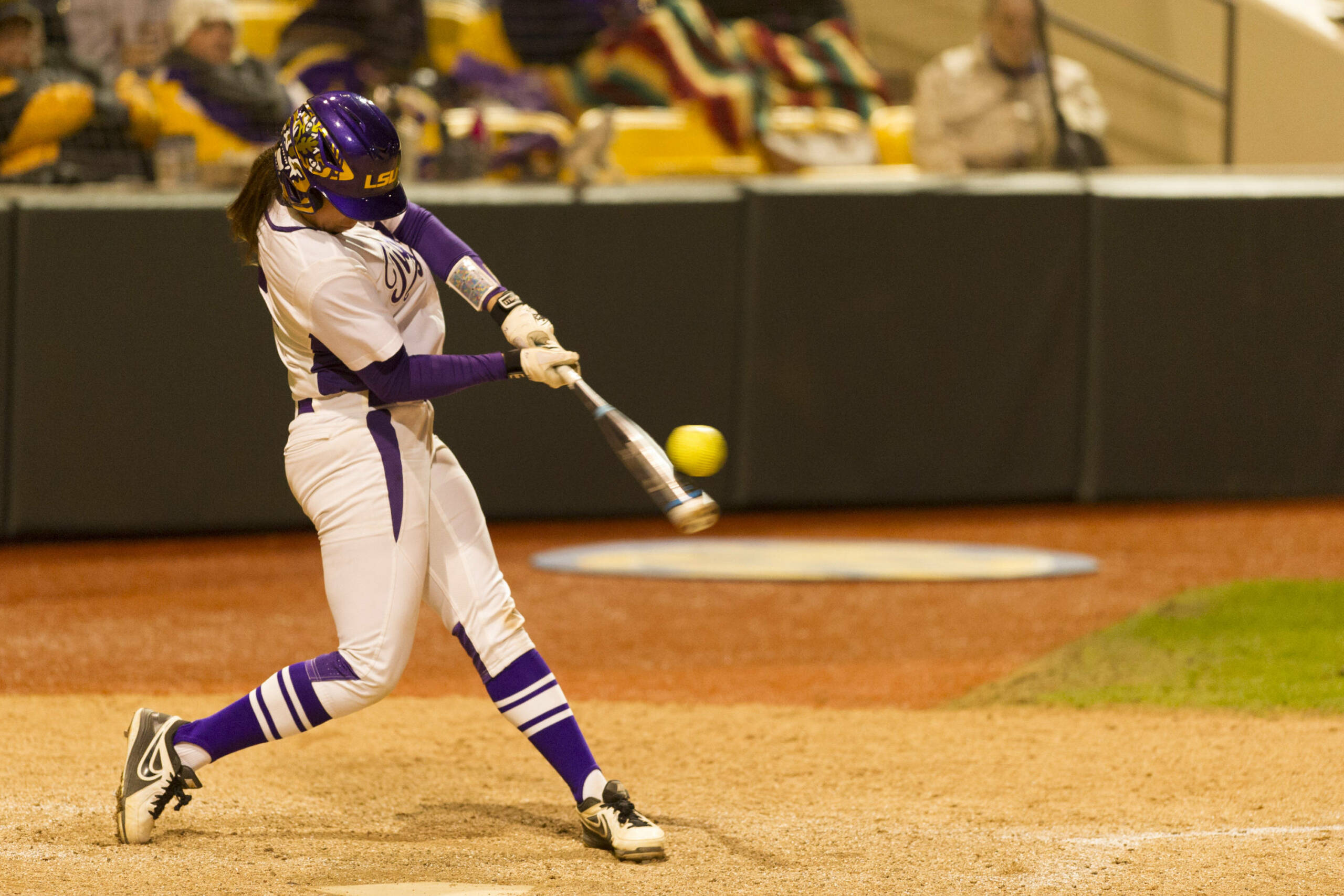 BATON ROUGE, La. – In the first game of the 2015 Purple & Gold Challenge for LSU, the Tiger bats came alive and in a big way, scoring nine runs on nine hits, getting home runs from Kellsi Kloss, Sahvanna Jaquish and a career record-tying one from Bianka Bell amid a three-hit shutout from starter Baylee Corbello as LSU cruised to a five-inning win over Stephen F. Austin.

After scoring two runs each in the first and third innings, LSU (17-0) exploded for five in the fourth to put the game out of reach for good, extending the team’s record start for another game.

“There are no easy games,” head coach Beth Torina said. “Every time we play someone, they are coming to beat us. They are coming with their “A” game. I thought we played really well. We were able to do a lot of things really well. We played good defense. We got a good performance on the mound. She got better as the game went on. The offense really showed up.”

“I don’t think a lot of teams can say that they have this much depth with their lineup,” Griggs said. “I think it’s very unique and I can’t wait to see what everyone can do.”

Corbello (5-0) captured the shutout by going the distance and scattering just three hits with nine strikeouts to just four walks. The sophomore held the Ladyjacks (5-8) to just a .167 batting average as a group, holding SFA to 0-5 with runners in scoring position.

Callee Guffey (2-3) earned the loss for Stephen F. Austin, allowing nine runs, eight earned, with five walks to just one strikeout, allowing multiple hits in every inning. Shalie Day earned two of the three hits for the Ladyjacks, going 2-for-2 with a double.

A.J. Andrews earned a walk to lead off the LSU offensive, promptly stealing second to get into scoring position. After a fly out to left, Bell drew a walk to put two on for LSU, as a pop up in foul territory was the second out. In the next at-bat, Kloss ripped a triple off the wall in right center to score both to make it 2-0 LSU.

In the first at-bat of in the bottom of the third, Bell used her third pitch to drill a shot deep into the night sky, clearing the fence in center for the solo shot, tying the career mark and putting the Tigers up 4-0. After a pop up in foul territory, Kloss went further into the count but ended up with the same result launching one over the fence in center for the 4-0 LSU lead.

Griggs opened the bottom of the fourth with a single up the middle to take first. She stole second, advancing to third after a fielding error put her steps from home plate. A walk to Andrews put runners at the corners for LSU, as Landry singled through the left side scoring one and moving Andrews to third, with Landry moving to second to make it 5-0.

A single by Bell scored Andrews to make it 6-0, keeping runners at the corners, with an easy trot in for both as Jaquish sent one to the berm in left to make it 9-0 LSU for the three-run shot and the final runs of the contest.

After falling behind by its largest deficit all season and looking listless early, the LSU softball team came to life when it counted most, scoring all seven of its runs in the team’s final three batting innings to overcome a scrappy Ball State Cardinals squad to win 7-3 to close out day one of the 2015 Purple & Gold Challenge at Tiger Park in Baton Rouge.

After spotting Ball State (7-9) three runs in the top of the third inning, LSU (18-0) continued to chip away at Cardinal pitching, finishing the contest with eight hits as seven LSU players earned at least one on the night. The Tigers came through in the clutch, earning six of their hits with two outs on the board, while the Cardinals were 0-6 with runners in scoring position.

Coming through with the biggest hit of the night was sophomore infielder Sahvanna Jaquish, who’s second three-run home run of the day helped LSU overcome the early struggles as she finished with seven total RBIs on the afternoon, going 1-for-3 against BSU with four RBIs and a run scored. Up until the latter innings, A.J. Andrews had the only two hits for the team as she went 2-for-2 with two stolen bases and two runs scored.

“I think it shows how much heart and fight this team has,” Hoover said. “Sometimes wins aren’t pretty, but it happens and we fought and our offence was huge tonight.”

After pitching earlier in the day, Nicole Steinbach (4-4) suffered the loss after allowing six runs on seven hits with four strikeouts and six walks, shutting down the LSU bats early before getting tagged with the loss late. The Cardinals were strong at the plate, led by Loren Chilar’s 4-for-4 outing with a run scored.

In the first inning, Andrews singled up the middle to take first, stealing both second and third, but she couldn’t be brought in as the inning ended with her at third. Andrews would earn the team’s second hit in the bottom of the third, advancing to second but being stranded there as well.

Ball State came through and struck first, as in the top of the third, a solo home run and a two-run home run shot by the Cardinals put LSU in a 3-0 hole early. Selman’s night was done after that, as Hoover came in to pitch and got the final two outs of the inning to close the frame.

“They put us on the ropes a little bit, but I think we did a good job of not trying to make everything right at one time, even though we did have that big inning that put us over the edge,” Torina said. “. I think they did a nice job of chipping away at it. Their bats got better as they went on and drawing walks. They did things they needed to do to put up some runs.”

In the bottom of the fourth, a walk to Bianka Bell put one on for the Tigers, stealing second to get into scoring position. A grounder to short kept her at second, until a wild pitch moved her to third. A walk to Kellsi Kloss put runners at the corners, as Sandra Simmons reached on a fielder’s choice, allowing Bell to score to make it 3-1.

After consecutive strikeouts for LSU to open the bottom of the fifth inning, the Tiger rally started slowly with a walk to Andrews to put one on. A single to third by Bailey Landry and a fielding error at first allowed Andrews to move to third to put runners at the corners. With that, Bell ripped a shot to right to score the outfielder to cut the Ball State lead to just one at 3-2. Hoping not to let the momentum go to waste, Jaquish pounced and took the second pitch of her at-bat over the fence in left for the three run shot to make it 5-3 LSU for the team’s first lead of the game.

A walk to Kloss kept the inning going, as Simmons singled through the left side to put two back on. Allie Walljasper laced a single through the middle of the infield to score Kloss to make it 6-3 to add another run for the Tigers. Jaquish plated the final run of the game on a sacrifice fly in the bottom of the sixth to give LSU an insurance run going up 7-3.

LSU will be back in action on Saturday, starting day two of the Purple & Gold Challenge with a matchup against Florida Atlantic at 5 p.m.