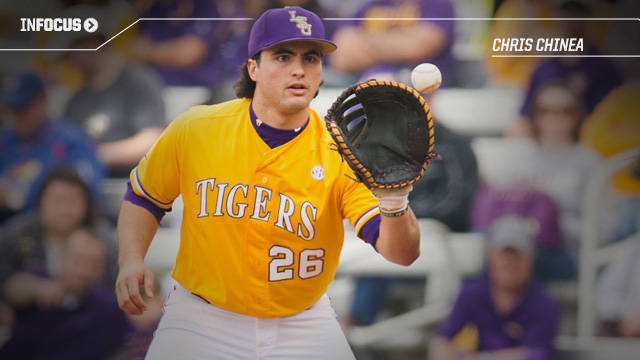 As a native of Miami, Fla., LSU junior first baseman/catcher Chris Chinea initially thought during his recruitment that he would sign with the Miami Hurricanes. He was committed to “The U” for most of his high school career, but even though he was prepared to enroll at his hometown university, Chinea was always aware of the prestige of the LSU baseball program.

He decided to re-open his recruitment during his senior year, and it was at that time he received a call from former LSU hitting coach Javi Sanchez that would ultimately be the key factor in deciding where he would play for the next four years.

“There’s just a great history here (at LSU). This program is amazing,” explained Chinea. “Once I got a call from Coach Javi, I was excited right away. I knew about the LSU history from day one. They have six national championships and I wanted to contribute to another one.”

Chinea came to LSU for the 2013 season and was immediately aided by the tutelage of former LSU catcher, Ty Ross, who is also a south Florida native.

“The first year was a learning process. I learned behind Ty Ross. He taught me the ropes; I knew him from high school and he really helped me out,” said Chinea.

“He really got me accustomed to the program and how everything went on around here. For last year, I had an extra year under my belt and you’re more confident. You know how gameday works and how practice works, and now for your junior year you’re ready to roll.”

Chinea has developed into a multi-talented player who has been able to utilize his abilities to play multiple positions on the field. He has started games at catcher, first base, and the designated hitter spot for the past two seasons. He also spent the last two summers playing in the Cape Cod League, which he described as one of the best times that he’s had.

Chinea played alongside LSU teammate Kramer Robertson for the Wareham Gatemen, where he batted .310 (27-for-87) with four doubles and 18 RBI on his way to becoming a Cape Cod League All-Star.

Now, heading into the early portion of the 2015 schedule, Chinea’s unselfish attitude won’t allow him to say what his official position is for the team, as he has shown that he is more than willing to play any position on the field.

“He brings a lot to our team,” said LSU infielder Danny Zardon. “He’s a good player. I grew up knowing him. We’re both from Miami, so I know him really well. He brings a lot of good stuff to us. He brings good hitting and good power.”

Aside from being one of the premier hitters for the team, Chinea realizes the importance of his role as an upperclassmen, leader and mentor for the incoming freshmen class, many of whom are pitchers.

“As a catcher, we got a lot of freshmen arms (this year)… We’ve got to go control the pitching staff. To be successful, they have to be on their A-game,” said Chinea. “As veteran catchers, (Kade) Scivicque and I have to control them and show them the right way.”

While there is a battle between Chinea and Scivicque for the starting catcher spot, Chinea describes it as merely “friendly competition” between best friends on and off the field. However, Chinea knows that he will need to keep bringing a high intensity to both practice and games in order to maintain a role in the lineup on an LSU team that is loaded with talent.

“You’ve always got to be working. It’s a game of failure. You’ve got to come here to the park every day and just work hard and get better in every aspect of the game,” explained Chinea. “There is always someone out there always trying to work harder than you, and you have to come here and work harder every day.”