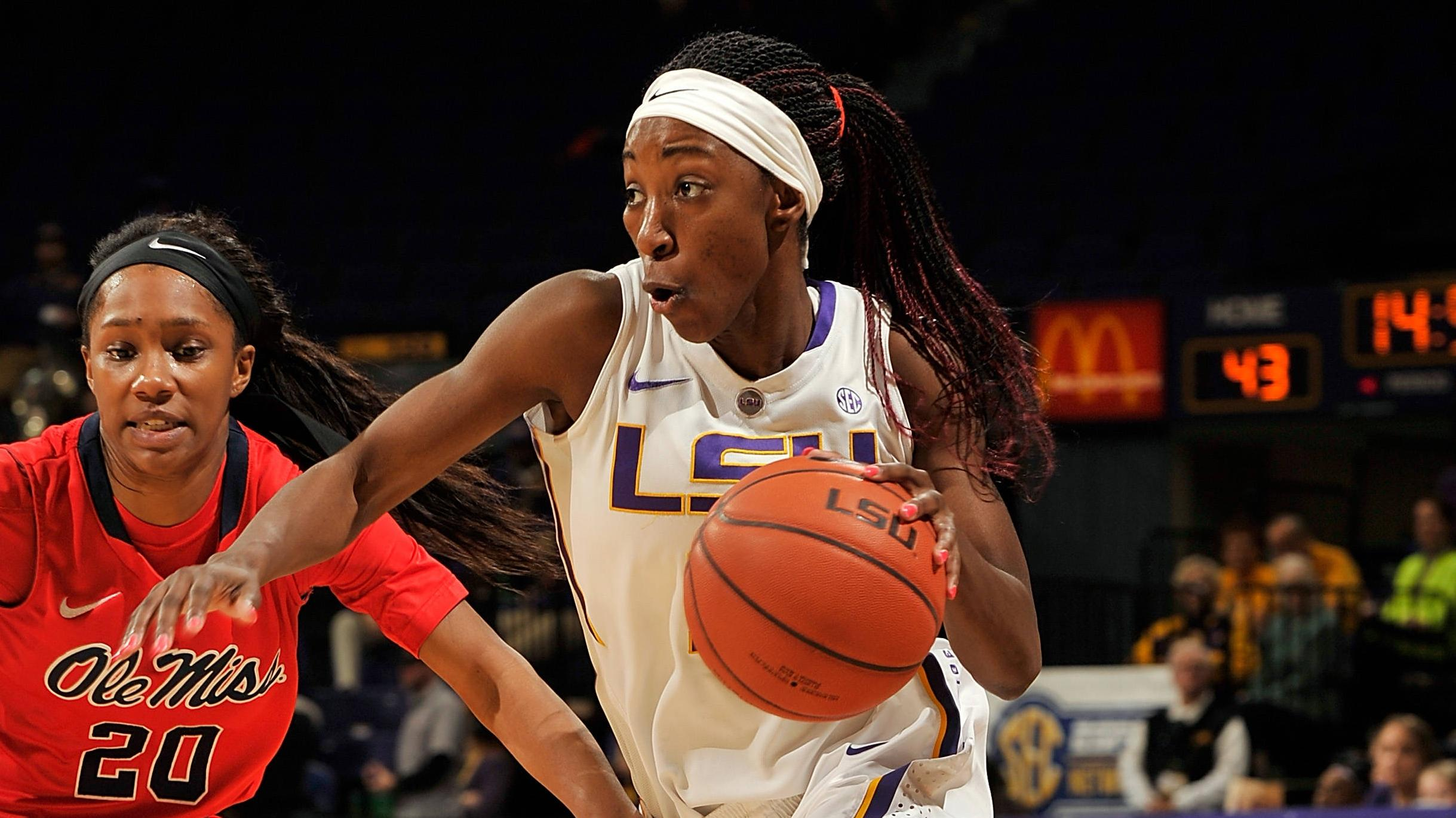 OXFORD, Miss. – The LSU women’s basketball team overcame a 13-point first half deficit and took a lead inside the final minute before Ole Miss edged the Lady Tigers 58-57 on Thursday evening at Tad Smith Coliseum.

LSU (15-12, 9-6 SEC) was handed consecutive SEC losses for the first time on the season. The Lady Tigers are tied for fifth place with Kentucky in the SEC standings. LSU still has an opportunity to secure a Top 4 seed and a double bye at the SEC Tournament after Mississippi State and Texas A&M were dealt losses during tonight’s action.

“The one thing we consistently talk about is you have to your defense, and you have to have your board play when you go on the road,” head coach Nikki Caldwell said. “We had a lot better offensive production in the second half. Our inability to make free throws did hurt us. I’m more concerned with our inability to defend. We did not bring the same defensive intensity that we had the first time that we played Ole Miss.”

Raigyne Moncrief poured in 18 points on a 9-for-13 shooting effort to go along with eight rebounds and five steals. For Moncrief, she has reached double figures in nine of her last 11 games.

Danielle Ballard tacked on 14 points, six rebounds and two assists. She extended her run to 11 consecutive games with 10-plus points.

The Ballard-Moncrief combo racked up 12 points apiece en route to 24 of LSU’s 34 points during the second half. They were a combined 11-of-16 from the floor in the second 20 minutes.

LSU’s defense held Ole Miss without a field goal during the final 8:22 of the contest. However, the Rebels were able to score their last eight points at the foul line and converted on 16-of-22 attempts from the charity stripe.

Ole Miss was fueled by Gracie Frizzell and Erika Sisk who pumped in 14 points apiece. Frizzell did her damage on a quartet of three-pointers whereas Sisk was a flawless 10-for-10 at the free throw line. Tia Faleru chipped in a double-double with 10 points and 10 rebounds for the Rebels.

Trailing 54-48 at the 3:36 mark of the second half, Ballard got the shooters roll on a midrange jumper followed by a Moncrief layup in transition after a Boykin steal. Then, Ballard drove hard to the basket for a layup in traffic. She was fouled and converted on the free throw for a traditional three-point play to vault LSU ahead 55-54 with 1:02 remaining.

Eight seconds later, Sisk knocked down a pair of foul shot of her own to put Ole Miss back in front 56-55. On LSU’s ensuing possession, Ballard went hard the basket and hit another driving layup to give the Lady Tigers a 57-56 edge with 24 seconds to go.

The Rebels were once again awarded free throws with 9.3 seconds on the clock, and Faleru connected on the pair to place Ole Miss up 58-57.

Moncrief drove the length of the floor and her 8-foot runner on the right elbow rimmed in-and-out. The ball went out of bounds with 2.0 seconds left. After an official review for possession, LSU kept the ball and had one final chance. However, Moncrief’s 15-foot jumper came up short.

“We were looking to try and get a back door play,” Caldwell said. “We saw they had a smaller guard on Moncrief so we did a lob play. With her athleticism, her jump shot was right there. She caught it at the free throw line and had a nice look. Like I told Moncrief after, this game did not come down to that one jump shot. It came down to a lot of different areas that we broke down in. It started with our defense, and I didn’t like the fact that we had to change our defense a few minutes into the game. Ole Miss did a nice job of executing and finding the hot hand.”

Ole Miss raced out to a 12-2 advantage highlighted by a pair of Frizzell triples over the first 3:20 of the game. The Rebels stretched their lead to 27-14 after a Faleru jumper at the 4:02 mark.

LSU rallied with the final nine points of the stanza behind its bench. Jones provided a layup and a free throw, Bethel added a layup off an offensive rebound and Deemer drained two free throws to spark the run and make it 27-23 at halftime.

Ole Miss’ last basket came on a Faleru layup to five the Rebels a 50-42 advantage with 8:22 to go before Ballard and Moncrief registered 13 of LSU’s last 15 points down the stretch.

“When you look at the first four minutes of the game, our defense really let us down,” Caldwell said. “We had a lack of awareness of where Ole Miss’ shooters were, and we allowed their three-point shooter (Frizzell) to knock down two three-pointers right off the bat. We didn’t score the basketball ourselves. We missed a lot of jump shots, and we missed a lot of easy looks to the basket. They got out on us quickly. Those four minutes really dictated the tone of the game, and that’s where the game was initially lost. We tried to fight back, and we got ourselves into position to win the basketball game ultimately, we fell short.”

LSU returns home for Senior Day as No. 12 Texas A&M visits the Maravich Center on Sunday afternoon. Tipoff is slated for 1 p.m., and the game will be televised by ESPNU along with www.WatchESPN.com and the Watch ESPN app.