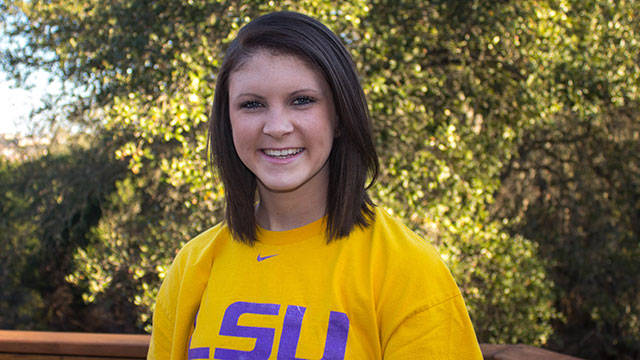 BATON ROUGE – LSU head coach Fran Flory and the volleyball team have announced the addition of Michelle Irvin, a 6-1 outside hitter from Austin, Texas, to the Tiger roster for the 2015 season.

Flory and the staff have been busy since the season ended in December, as Irvin is the fifth new piece to the roster for 2015 as she will be joined by fellow future freshmen Olivia Beyer, Katie Kampen and Brittany Welsh, along with transfer junior Tiara Gibson.

“Adding Michelle to our roster is what in Louisiana we call lagniappe, she will add that extra balance to our class,” Flory said. “As a six rotation outside, Michelle has the ability to terminate offensively and also has very good ball control skills. Michelle is certainly a great fit athletically, but she is also a great fit academically and as a person. She will add in all aspects and we are thrilled she is a Tiger.”

Irvin comes to LSU after a stellar prep career at Austin’s Westlake High School, where she was a two-sport athlete in both volleyball and track and field. She earned letters for three years in each sport under Al Bennett on the court and Chris Carter out on the track.

As a senior in 2014, Irvin was a Texas Girls Coaches Association 6A All-State selection, while also being named the district 14-6A Co-Hitter of the Year after finishing her final year with 387 kills, averaging 3.8 kills per set on a .270 hitting clip with 286 digs and 27 aces. She was a second team all-district selection as a junior, as her Westlake teams captured four consecutive district championships and three consecutive 6A area titles.

For her career she finished with 779 kills to lead the team in the category as a junior and senior, while hitting .240 with a .380 kill percentage and 487 digs. The kills are the third most for an outside hitter in the school’s history, while the digs are sixth-most.

In track and field, Irvin specialized in the long jump, high jump and the triple jump, while also running the 400-meter dash. Academically, she was selected to the all-district academic team. On the club level, she is currently playing for Austin Juniors 18 Mizuno under coach Brandi Bradley Holsonbeck.

Born in Austin, Irvin’s father Larry and one of her other relatives both attended LSU, and comes from a collegiate athlete family as her brother Christopher was a decathlete and sprinter for the University of Texas, her mom Greta played tennis at the University of Maryland and grandfather played football for the Terps and was drafted by the Green Bay Packers.