In Focus: Scivicque is a 'Rock' For the Tigers 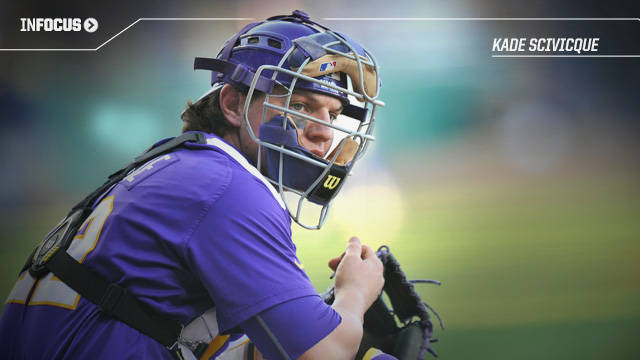 He was always told he couldn’t.

Growing up an avid LSU fan 55 minutes down the road from Baton Rouge in Maurepas, La., Kade Scivicque knew from a young age that he wanted to be a part of the action in Alex Box Stadium and don the purple and gold of LSU, but he also knew that it would be a challenge.

Scivicque graduated in a class of 16 people and played high school ball in the second smallest division in the state, Class B, which only drew approximately 45 people to each game.

The “pretty big” crowd to Scivicque wasn’t big enough for a Division I offer out of high school, but it was big enough for the four-time all state performer to garner an offer from Southwest Mississippi Community College.

While in junior college, Scivicque earned first team all-state honors and was named the league defensive player of the year after batting .321 with four homers, 12 doubles and 37 RBI with a .991 fielding percentage in 2013, also securing a spot for him on the team of his childhood dreams.

“My sophomore year in junior college, LSU offered me. I had talked to (assistant coach) Will Davis before, and I never really thought it would come to this,” Scivicque said. “I jumped on the opportunity to take a visit here, and here I am.”

At Scivicque’s first fall practice there were more people in attendance than at one of his high school games. The “crazy” environment at Alex Box Stadium, did not stop Scivicque from working hard, a quality he picked up from both of his parents at a young age.

“Kade gives it 100 percent every day on the field. He practices hard no matter what position he’s at, and he’s a real go-getter,” junior catcher Chris Chinea said.

Working on polishing his overall catching techniques during his first year, Scivicque was satisfied to contribute in any way head coach Paul Mainieri saw necessary.

In 2014, Scivicque started in 52 games for the Tigers and played in 56 overall, getting off to an electric start and coming out to The Box every day eager to improve and maintain an everyday impact in the lineup.

“I was just trying to help the team in any way possible and play ball like I knew how to play,” said Scivicque. “I wanted to try to be the best that I could and start some games and help the team.”

Scivicque was named to the Golden Spikes Award Mid-Season Watch List. Shortly after, he endured a slump at the plate, but his attitude did not waver. Scivicque was at the park before practice and stayed after practice to work on his skills, always with a smile on his face, cracking jokes with enthusiasm.

Turning his performance around, Scivicque proved to be one of the main contributors to the Tigers’ offense last season, batting .394 in the last 12 games of the season. He had eight three-hit games on the season, tying outfielder Mark Laird for the most on the team.

“Kade Scivicque is probably the most underrated player on our team,” Mainieri said. “Kade is a rock for us.”

Scivicque helped to lead the Tigers to an SEC Tournament title, hitting .417 with one double, one home run, four RBI and three runs, and he was named to the SEC All-Tournament team.

Leading the Tigers to the SEC Tournament championship proved everyone wrong. Scivicque was unable to win a championship in high school or junior college, and he was finally able to accomplish that dream in the uniform he worked his entire life to wear.

“Kade does kind of the unsung hero work, and he’s improved so much from the time he’s been here at LSU.”

Coming into his senior season, Scivicque knows that he will be called on in various roles and is willing to take the challenge wherever necessary, whether it is behind the plate, at first base or designated hitter.

Along with that role, Scivicque has taken freshman Michael Papierski under his wing, mentoring him and preparing him for future years behind the plate for the Tigers, leading by his work ethic.

“He’s like an older brother on the field for me. He teaches me what to do. He tells me if I’m doing something wrong and tells me how to fix it,” Papierski said.

The first LSU baseball player from Maurepas picked up his 2015 senior season right where he left off, hitting a home run to the left field bleachers in his first plate appearance on opening night.

“I’d love to be in the lineup every day wherever Coach sees fit and do all that I can,” said Scivicque.