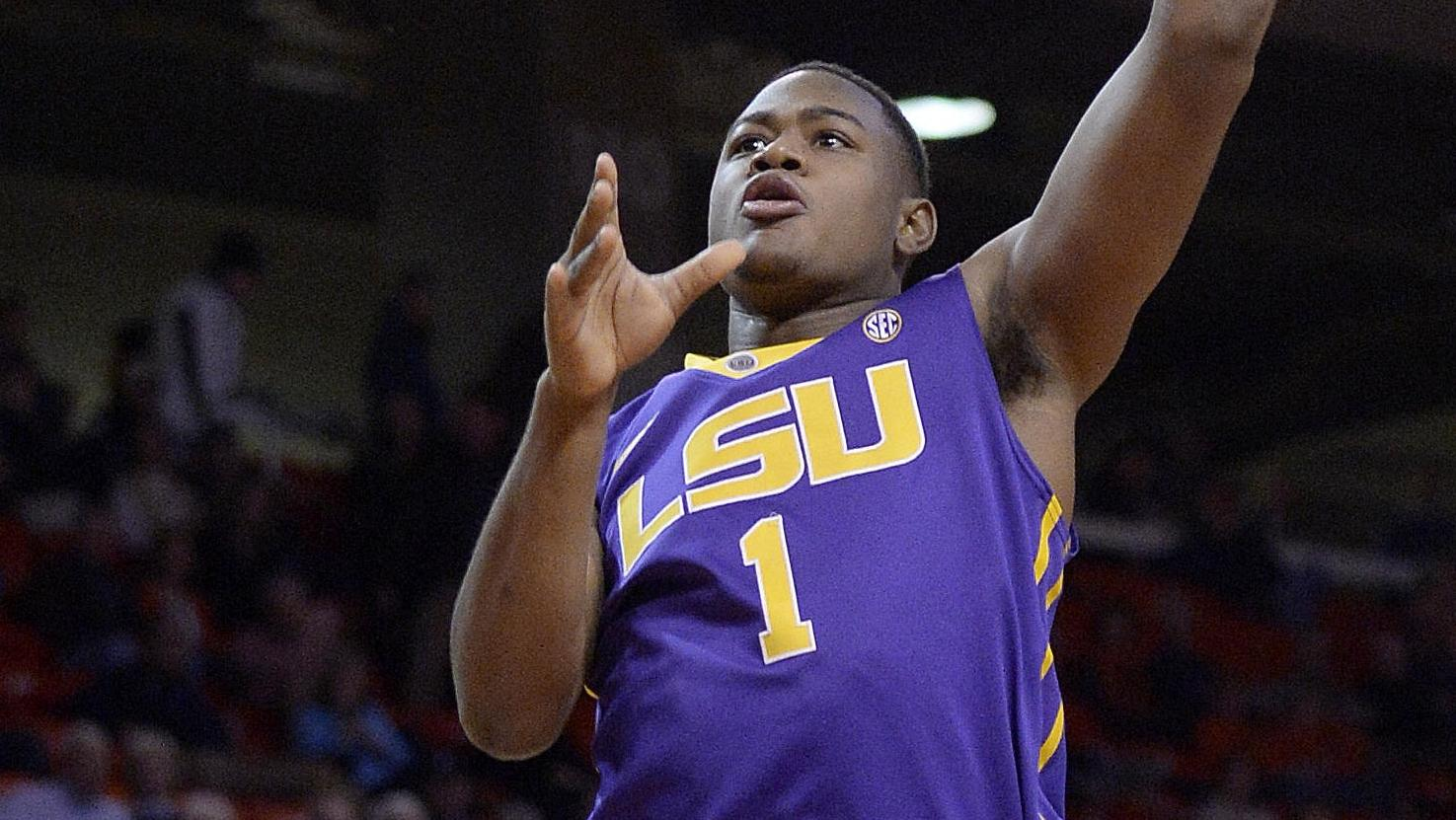 AUBURN, Ala. – Jarell Martin pumped in 25 points and pulled down 12 rebounds to claim his 12th double-double on the season as the LSU men’s basketball team avenged an earlier loss against Auburn this season en route to a convincing 84-61 win on Tuesday evening at Auburn Arena.

LSU secured its second straight 20-win season under Jones. The last time the Tigers secured consecutive 20-win campaigns was during the 2004-05 and 2005-06 seasons.

With the victory, LSU inched a half-game ahead of Georgia for sole possession of fifth place in the SEC standings.

For Martin, it marked the ninth time that he eclipsed the 20-point barrier on the season and the third time in the last five games. He was a crisp 11-of-17 from the floor which included a trio of dunks.

Jalyn Patterson set career-highs with 16 points aided by a quartet of three-pointers and handed out seven assists versus one turnover. He has secured six of his eight efforts in double figures against SEC opponents.

Jordan Mickey turned in 14 points on an efficient 7-of-8 shooting. He also registered three blocks to surpass the century mark for the second straight season. Mickey and former All-American Shaquille O’Neal are the only LSU players to collect 100 blocks during a single season.

As a team, LSU produced a 37-of-64 shooting clip and distributed 22 assists which tied the third-highest game total in the Jones era. The Tigers also improved to 19-1 under Jones and have won all eight games this season when shooting 50 percent or better.

LSU dominated inside the paint and connected on 26 of its 37 field goals on the interior. The Tigers tabulated a commanding 52-18 advantage in paint points. LSU also scored 16 of the game’s 20 fastbreak points and held a 15-8 edge on second-chance points.

Auburn was led by Cinmeon Bowers’ 16 points and six rebounds. The SEC leading scorer, KT Harrell, chipped in 14 points on a 5-of-11 shooting performance. Quarterman drew the defensive assignment on Harrell for most of the game.

LSU utilized the pick-and-roll early to score the opening six points of the contest. Quarterman found Mickey for a layup, and Patterson hit Martin for a runner to give LSU a 6-0 lead at the 17:58 mark.

Ahead 20-18 with 8:10 remaining, LSU pushed the lead to double figures with 14 of the next 20 points over the next 3:28 off the clock. Quarterman kickstarted the flurry with a runner on the left baseline followed by a Patterson triple on the left wing to vault LSU ahead 25-18.

Martin tacked on a driving layup and set up another Patterson three-pointer with a screen at the top of the key. Gray added a layup and found a cutting Martin to push the LSU lead to 34-24 with 4:33 left.

LSU carried a 41-34 advantage into halftime and handed out 11 assists on its 19 field goals in the first half. Martin and Mickey combined for 20 points on a 10-of-14 from the floor.

Auburn got as close as 49-46 with 15:51 to go before LSU ripped off 15 consecutive points over the next 3:02. Patterson, Martin and Hornsby buried three-pointers to ignite the run over 108-second span. Then, Martin tacked on a pair of traditional three-point plays to make it 64-46 at the 12:34 mark. LSU led by over 20 points for the final eight-plus minutes of the contest.

Up next, LSU returns home to face Ole Miss on Saturday afternoon. Tipoff is slated for 1 p.m. from the Maravich Center, and the game will be televised by FSN. The FSN telecast also will be available for those outside the FSN viewing footprint on www.ESPN3.com and the Watch ESPN app.