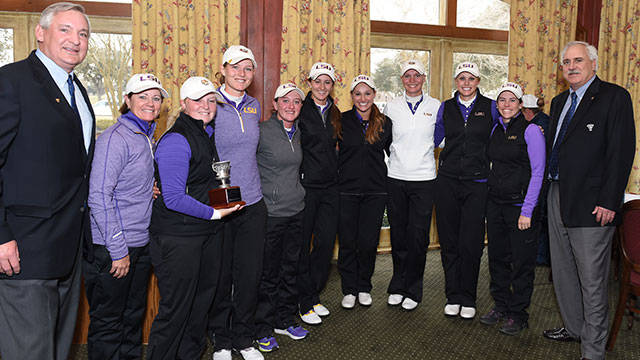 Editor’s Note: Thanks to Tulane Media Relations Director Roger Dunaway and Tulane Athletics for assistance with quotes and photos from today’s final round.

NEW ORLEANS — The 17th-ranked LSU Lady Tigers post the only under par round on the final day of the Allstate Sugar Bowl Intercollegiate at English Turn Golf and Country Club to win by 12 strokes their second team title of the 2014-15 season.

Also, senior Madelene Sagstrom and sophomore Caroline Nistrup both post 1-under par 71 to tie for the individual title at 4-under par 212.

The win, following up the win at The Alamo in San Antonio to close out the fall slate, is the 39th in the history of the LSU women’s golf program and the 38th under the direction of LSU head women’s golf coach Karen Bahnsen.

“I think this might be one of the only tournaments we have ever led from wire to wire,” Bahnsen said after the round. “(Monday), even though we struggled a little bit, we were able to fight through it and hang in there. We got through (Monday’s) round then talked about how our plan for (Tuesday) was to play within ourselves. We wanted to get out on the golf course and not worry about all the other stuff going on with the leaderboard. Obviously, we were more successful in sticking to our game plan today than yesterday. I’m really proud of this team.”

For Sagstrom, a winner in her junior season, it is her second career LSU title and her 14th top 10 finish of her career. It followed up a fourth place finish at The Alamo, a tie for third in Puerto Rico and now the co-championship at English Turn.

Nistrup was second at The Alamo and the victory is her first at LSU and her seventh top 10 finish for the Lady Tigers.

While playing in separate groups, the individual title chase proved very interesting. Both played well in the cool conditions with Sagstrom taking the lead after the ninth hole with a 1-under 35 while Nistrup posted even par 36. That put Sagstrom at -4 and Nistrup -3. Sagstrom played the back nine in even par with a bogey on 14 and a birdie on 15 to finish at 1-under 71.

Nistrup, 1-over on the day after a bogey on the 11th hole, played the last four holes in 2-under par to get back to 1-under 71 on her own card to stay tied with Sagstrom.

“I feel like I handled the ball very well this week,” said Sagstrom. “I’ve been striking the ball pretty well and have been keeping the ball in play. I also made a few putts here and there, which is key. Mainly, I was able to keep my composure and stay focused. A big win like this really helps to improve our confidence. We are a great team, and now we have proven it to ourselves. We know we can play with good teams. For me personally, I know that what I have been practicing on is working. I’m going to keep doing my thing and trying to compete.”

“I was able to hit some shots close to the pins today, which led to some easy birdies,” said Nistrup of her play. “Then, I kept it together on the back nine. I finished some holes with good putts, which always helps out. This was a very important win for us. It shows that we can maintain our composure down the stretch and take a lead all the way to the end. We have been close to winning a few times this season, so it was nice to finally come away with one this week.”

The pair finished three shots ahead of Erynne Lee of UCLA who posted an even par 72 for a 1-under 215.

UCLA was able to stay close to LSU early on in the round but the Lady Tigers gradually was able to pull away to the final margin as Florida made a strong late move to get to a tie for second. Both finished at 22-over 886. Arizona and Tulane, tied for second entering the second round, finished in a tie for fourth at 28-over 892.

”Although today was much colder, there wasn’t as much wind (as Monday),” said Bahnsen. “The wind did pick up a little bit towards the end, which made things a little trickier, but at that point our girls were in a good mindset and handled it well. This win just validates that we are doing the right things. Now we know that we are working on the right things and we want to keep doing what we have been doing. Winning won’t change anything that we do; rather, we will just work harder at what got us here.”

The Lady Tigers are back in action for their third of four spring regular season events March 6-8 at Hilton Head, South Carolina for the annual playing of the Darius Rucker Intercollegiate sponsored by the award-winning country star.

This may bring new meaning to Co-Champs. Madelene gets it even months; Caroline odd months. pic.twitter.com/Wvl63BAHBs