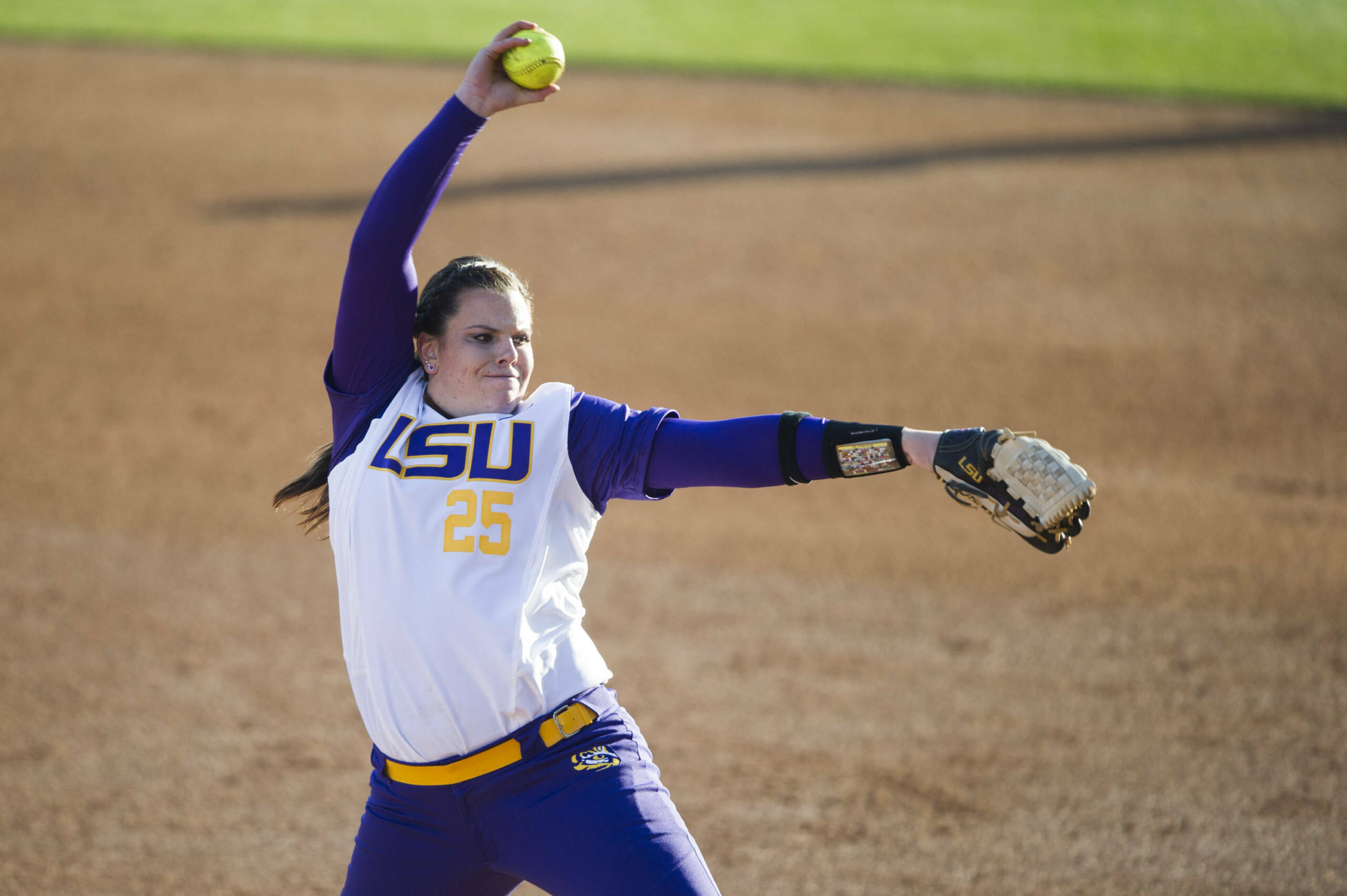 Nominee for SEC Offensive Player of the Week (2/23)

Sahvanna Jaquish, So., Highland, Calif.
LSU infielder/catcher Sahvanna Jaquish hit .500 for the week to tie for the team lead in hits with eight, while leading the squad with 15 RBI in a 6-0 week in LSU’s best start to a season in program history. Of Jaquish’s eight hits, five were for extra bases, with three home runs including hitting a game-winning three-run shot against Louisiana Tech, and the first grand slam for the team on the year against San Diego State. She produced five multi-RBI contests and three multi-hit games to her credit, striking out just once in 16 at-bats.

Allie Walljasper, Fr., Manteca, California
LSU Freshman Allie Walljasper completed another perfect week for LSU, highlighted by two complete-game efforts and a shutout to go 3-0 on the week and 6-0 on the season. Walljasper allowed just two earned runs in the three games, striking out 18 and walking only three, finishing the week with an ERA of 1.14. At the Mary Nutter Collegiate Classic, she pitched a combined 11.0 innings, allowing just two runs on nine hits with 16 strikeouts. She also hit one of LSU’s two grand slams on the same day at the classic, coming against Cal State Fullerton.

Carley Hoover, Fr., Clemson, S.C.
LSU freshman pitcher Carley Hoover picked up one of the biggest wins for LSU so far this season, helping defeat No. 13 Arizona on a week where she made three appearances, earning a win and a save for the Tigers. She earned the start against Louisiana Tech and although received the no-decision pitched four innings allowing an unearned run on just three hits with five strikeouts. Out in California, she came in with the bases loaded and the game tying run on deck to get out of that inning and close the door on the next for her second save of the season with two strikeouts. In her only start of the weekend, she went toe-to-toe with the powerful Arizona offense and held the Wildcats to three runs while striking out eight in earning the complete-game victory.

Notes on the Tigers

LSU is 16-0 on the season after going 6-0 last weekend with wins against Louisiana Tech and at the Mary Nutter Collegiate Classic in Palm Springs. LSU jumped up seven spots to No. 7 in the NFCA poll and USA Softball poll, the first time the Tigers have been in the top 10 since April of 2013. LSU is off to its best start in program history, surpassing the 14-straight wins the 2006 team earned to open that season. This is the longest winning streak in Beth Torina‘s coaching history, surpassing the 12-game one she had during her first season at LSU in 2012. This is the first winning streak for an LSU that has lasted longer than 15 games since the 2010 group set the record for consecutive wins at 24. LSU earned wins over San Diego State, Cal State Fullerton, No. 13 Arizona, Nebraska and Northwestern over the weekend. The matchup against Arizona was the third top 25 contest for LSU and is currently 3-0 in those games. LSU outscored all six opponents 45-11 over the weekend. In the Mary Nutter games alone, LSU outscored the five opponents 38-6. Of LSU’s 49 hits last weekend, 16 were for extra bases with eight doubles, two triples and six home runs. LSU is hitting .352 as a team on the year, hitting .363 last week. 44 of LSU’s 45 runs were driven in as RBIs against their opponents. The Tigers have three double-digit scoring games this season, including having two on Saturday against the Cornhuskers and Wildcats. The Tigers have earned double-digit hits nine times this year. Six wins have come via run-rule for LSU. The Tigers sported a 1.32 earned run average against opponents last week, with an opponent batting average of .238. On the season the team has an ERA of 1.03. 12 of the pitching staff’s 16 combined victories have come from complete-game efforts, including seven shutouts and three saves. Bailey Landry and Sahvanna Jaquish each led the team on the week with eight hits, hitting .500. Jaquish, who was named the SEC Player of the Week and College Sports Madness National Player of the Week, led the team in RBIs with 15 total, with a double, triple and three home runs including the team’s first grand slam of the year, slugging 1.250 with a .476 on-base percentage. Landry finished with nine RBI and five runs scored, with a stolen base and two sacrifice hits. Three of Bianka Bell‘s seven hits were doubles, while she hit her 32nd home run of her career, putting her one shy of tying the all-time mark of 33. A.J. Andrews hit .545 with a double and triple amid her six hits, scoring 11 times with two stolen bases. Andrews was walked a team-high eight times against opponent pitching. Constance Quinn had two doubles and a home run in her .429 week, slugging .786 with a .529 on-base percentage. Allie Walljasper earned three of the team’s six wins last week, allowing just two earned runs with staff-high 18 strikeouts. Two of the three were complete-game appearances with a shutout, finishing with a 1.14 ERA, while hitting the second team grand slam of the year on the same day at the plate. Carley Hoover earned a win and a save on the week, including earning the complete-game victory against Arizona in California. Hoover also came through with her second save of the season against San Diego State, as she is the first player since Rachele Fico in 2011 to have multiple saves in a season and fifth ever. Kelsee Selman made two appearances, going 1-0 with a 2.10 ERA, but earned her third shutout of the season, allowing just six hits with eight strikeouts and two walks in 6.1 innings of work. Baylee Corbello allowed just one unearned run on the week in five innings, walking four and striking out one.