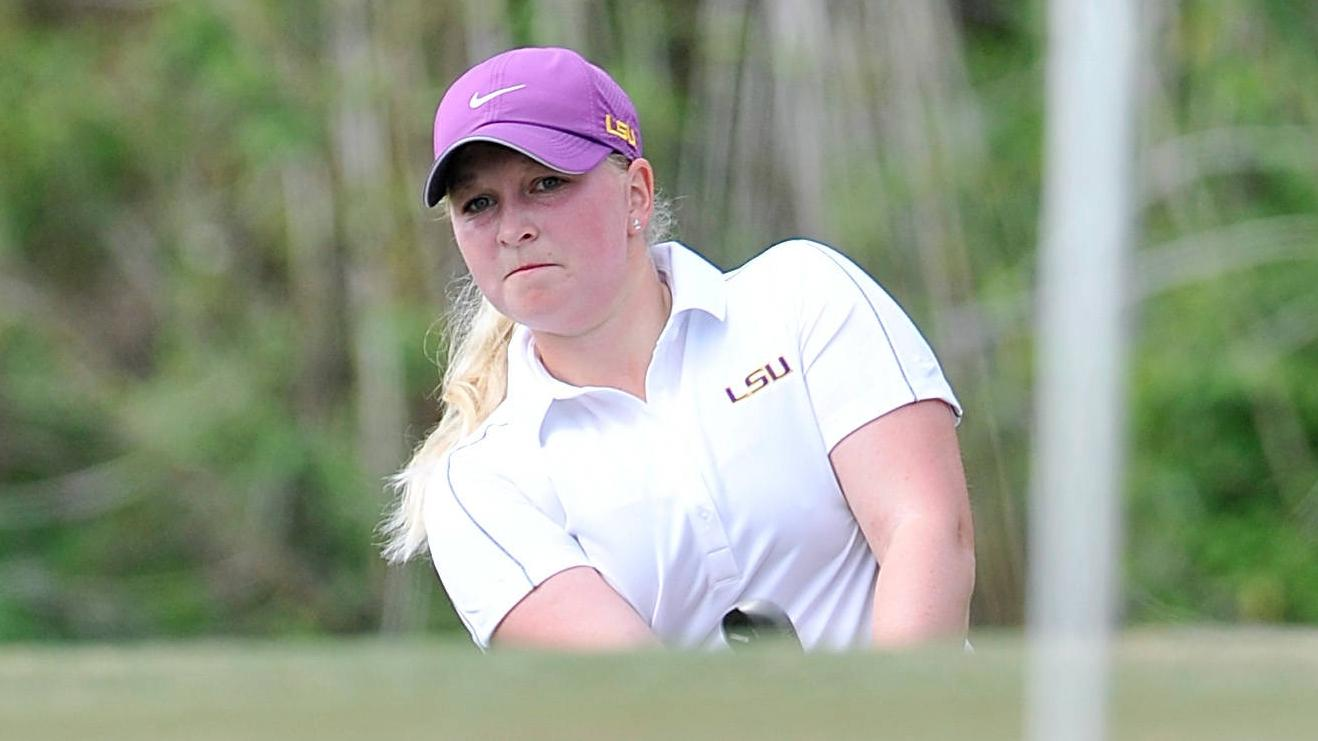 Editor’s Note: Thanks to Tulane Media Relations Director Roger Dunaway and Tulane Athletics for their assistance with post-round quotes.

NEW ORLEANS – LSU sophomore Caroline Nistrup and senior Madelene Sagstrom get things together in cold, windy conditions at English Turn Golf and Country Club Monday and both are tied for the lead after two rounds of the Allstate Sugar Bowl Intercollegiate women’s golf tournament.

Their play also helped LSU hold on to the 36-hole lead going into Tuesday’s final round shotgun start at 8 a.m. over the 6,189-yard par 72 layout that previously was the home of the PGA’s New Orleans Open.

Nistrup, ranked 71st in the Golfstat rankings, turned it on after a 1-over front nine, with birdies on 10, 11 and 13 before a bogey on par 3 17th. But she came right back on the iconic 18th hole at English Turn, getting a birdie there to shot 3-under 33 on the back nine and finishing at 2-under 70.

“It was cold out there. I definitely tried to keep my head in the game all around, but it was tough,” Nistrup said after the round. “The wind made the entire round difficult. I’m just glad I was able to get a few birdies in a row to drop, which kept me in the game today.”

“I didn’t play as well today as I did yesterday. I hit the ball pretty well, especially in the beginning, but I didn’t putt as well,” said the Swedish senior. “Also, I holed out on hole 5 for an eagle, so that was good. A big shot like that always helps a lot and gives a little confidence. I was able to give me a few good chances today.”

Nistrup and Sagstrom, who will both go off the first tee on Tuesday, but in different groups, lead by one shot over Krystal Quihuis of Arizona (73-69) and Emily Penttila of Tulane (69-73) at 2-under 142. Erynne Lee of UCLA at 1-under 145 is the only other golfer under par after 36 holes.

“They both played well today. It’s tough in these conditions, but they hung in there,” said LSU Coach Karen Bahnsen. Caroline made a few important birdies in the middle of the round that were huge for her. Mainly, they both managed their ball flight. The ball can easily get away from you in this weather, which is something the rest of our team struggled with.”

The Lady Tigers also counted an 8-over 80 from Carly Goldstein, a 9-over 81 by Nadine Dreher and also Elise Bradley posted 11-over 83. Freshman Claudia De Antonio, playing as an individual, had a strong second round of 5-over 77.

“As a team, we didn’t putt well today. We didn’t strike the ball terribly …,” Bahnsen said in assessing the round. ”I attribute some of the scoring just to us. Today was one of those days. It could have been much worse, but we hung in there and fought. It was tough day out there overall. There was a lot of side wind today, and the wind was hard to judge. We had a lot of side spin on the ball and often misjudged our clubs. The biggest issue was our putting and we just didn’t make putts. We will putt better (Tuesday).”

So it will be LSU, UCLA and Tulane in the final grouping that will go off the first three holes in the 8 a.m. shotgun.

“My big focus for (Tuesday) is managing the game,” Bahnsen said. “A bad day like (Monday) can become frustrating. (Tuesday) the weather will be similar, so we just have to manage how we react to things.”