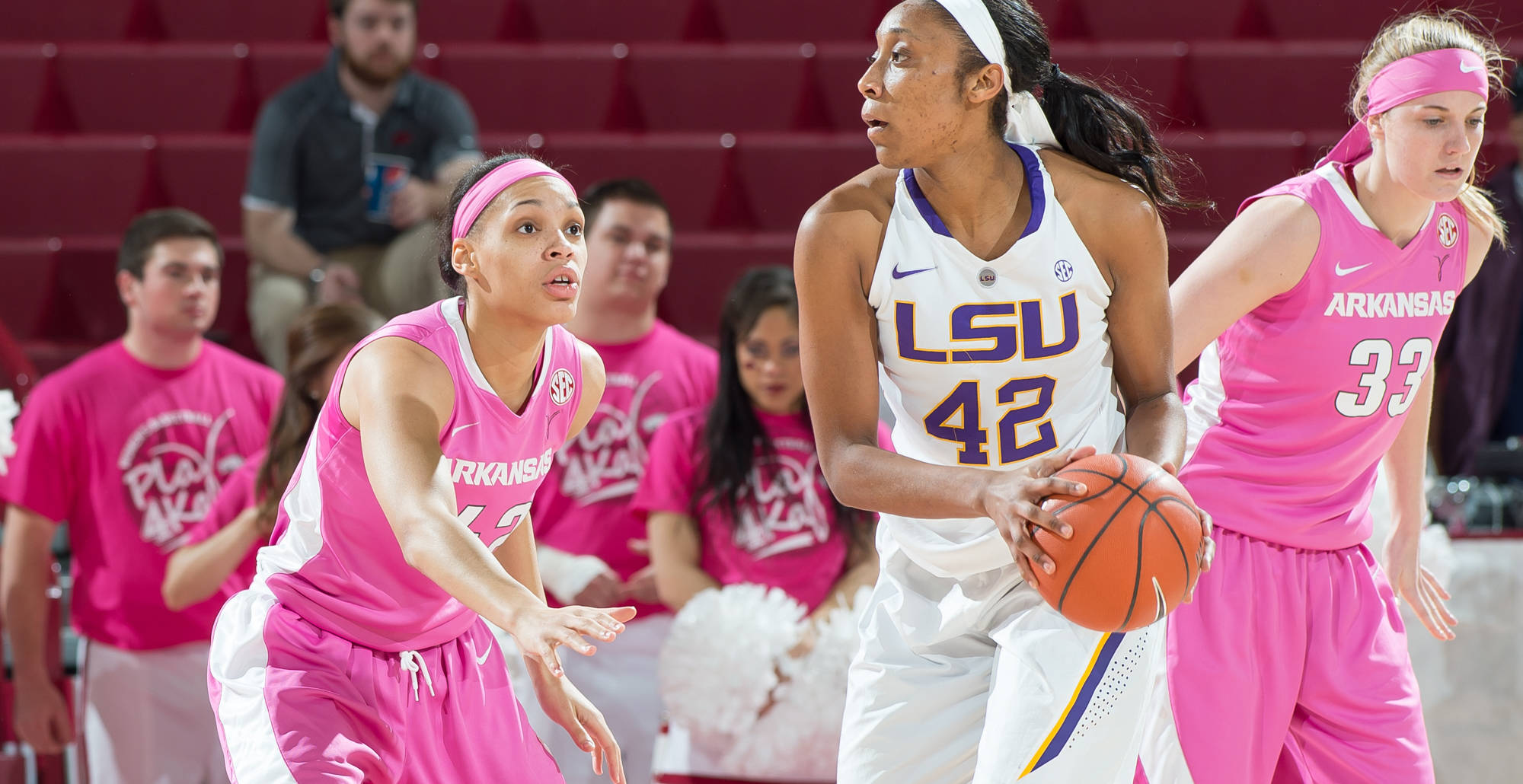 FAYETTEVILLE, Ark. – DaShawn Harden tallied a team-leading 14 points off the bench, but the LSU women’s basketball team was unable to recover from a slow start as Arkansas led wire-to-wire during a 63-41 victory over the Lady Tigers on Sunday afternoon at Bud Walton Arena.

“Offensively, this was one of our worst games. We had a lot of looks, but we weren’t able to knock down shots,” head coach Nikki Caldwell said. “When you’re on the road, you still have to be ready to play on the defensive end and be able to rebound the basketball. We broke down in a lot of areas, and we weren’t as aggressive as I would have liked us to be out of our matchup zone. I thought Arkansas did a nice job of being patient and using the clock. Their penetration and kick play action gave us problems.”

For Harden, she matched a career-high and knocked down a quartet of three-pointers. It was Harden’s first double figures scoring effort since LSU’s double overtime win at No. 15 Mississippi State on Jan. 15. She also added three steals during her 25 minutes of action.

Raigyne Moncrief was limited to a season-low three points and misfired on 12 of her 13 shot attempts before she fouled out.

Arkansas used a balanced attack as Calli Berna distributed nine assists and four players registered double figures. Kelsey Brooks poured in a game-high 20 points, the sixth time she’s reached the 20-point plateau on the season. Jessica Jackson tacked on a double-double with 17 points and 13 rebounds for the Razorbacks.

Arkansas connected on six of its first 10 shots and fired out to a 17-2 advantage with 13:31 remaining in the opening half. Brooks and Jackson sank a trio of three-pointers to spark the fast start for the Razorbacks. LSU started the game with a 1-for-11 shooting clip.

The Lady Tigers worked its way back to single digits behind Ballard and Harden who came away with eight points apiece on a 7-for-14 effort from the floor. It was Harden’s trey from the left wing inside the final minute that drew LSU back to within 32-24 at halftime.

The Razorbacks scored nine of the opening 12 points of the second half capped by a Brooks jumper to push the Arkansas lead back to 41-27 at the 15:51 mark.

LSU mounted one last rally as Harden buried triples 79 seconds apart to make it 47-39 with 7:12 left. However, Arkansas settled itself with a 16-2 run aided by seven free throws to close out the game.
As a team, LSU was held to a SEC season-low 17 field goals and 27.4 shooting percentage. The Lady Tigers struggled to a 3-for-11 effort at the free throw line.

Arkansas was 23-of-51 shooting and nailed five three-pointers. The Razorbacks were 12-of-24 at the charity stripe. They shot 20 of their 24 foul shots during the second half.

“It was good to have that spark from DaShawn coming in and being that offensive threat for us off the bench,” Caldwell said. “She did a nice job defensively as well. We have to make sure that we go back and watch the tape and look at the areas of concern. One of the primary things that we talked about in the locker room was our one-on-one defense. We definitely have to be better in that area.”

Next up, LSU wraps up its regular season road slate and travels to Ole Miss on Thursday evening. Tipoff is slated for 6 p.m. CT from Tad Smith Coliseum. The game will be carried online only by SEC Network Plus courtesy of www.WatchESPN.com and the Watch ESPN app.

The LSU Sports Radio Network will broadcast the game on its flagship station Talk 107.3 FM in Baton Rouge. Patrick Wright, the voice of the Lady Tigers, will call the action. The broadcast also will be available for Geaux Zone subscribers at www.LSUsports.net/live.