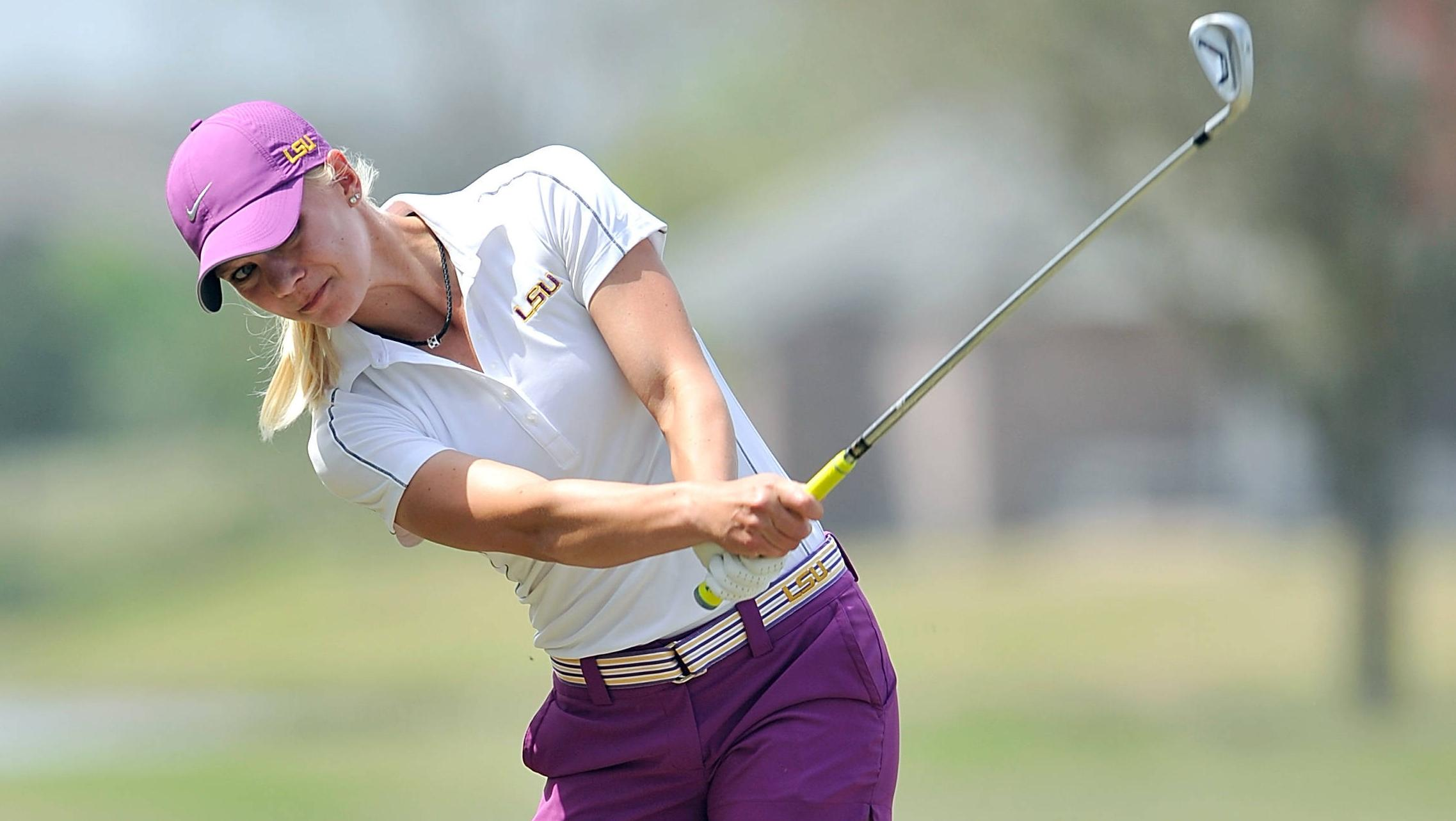 NEW ORLEANS – The 17th-ranked LSU women’s golf team stormed to the lead with a solid round of 4-under par after the first round Sunday of the Allstate Sugar Bowl Intercollegiate at the English Turn Golf and Country Club.

LSU’s round of 284 puts the Lady Tigers up by seven shots going to Monday’s second round of the 54-hole tournament. Host Tulane is second at 3-over 291 while sixth-ranked UCLA is at 4-over 292.

LSU senior Madelene Sagstrom is the individual leader after one day with a 4-under par 68 on the 6,189 yard layout. The Swedish golfer had three birdies on the front side (on the two par 3s and the par 5, 476-yard 6th hole) with birdies on the two par 5s on the back nine. Her only miscue was a bogey on the par 4 10th hole.

Sagstrom, ranked 29th on the Golfstat rankings, is one shot up on two golfers – Emily Penttila of Tulane and Cindy Ha of Vanderbilt – both at 3-under 69.

Overall, it was a solid round for the Lady Tigers as LSU counted a 1-under 71 from sophomore Caroline Nistrup and even par 72 from Louisiana native Mandeville junior Elise Bradley and a 1-over 73 from sophomore Carly Goldstein. Junior Nadine Dreher posted a 3-over 75.

“Well, the wind really picked up at the end, which made the course and pin placements even tougher,” LSU Coach Karen Bahnsen said about English Turn on a better than expected day for playing. “But, we knew we had to take advantage of this good weather because there is some really bad weather coming this way. For us, it was just a matter of taking advantage of our opportunities. Also, the greens were really soft, which is fantastic. We were able to throw darts and hit aggressively at the pins.”

That the Lady Tigers did, posting a team best 19 birdies while playing the par 3 holes in -2 and -9 on the par 5s. LSU’s five team players had 11 birdies on the back nine on the former home of the PGA’s New Orleans tournament.

“Our girls are great ball strikers, and they really played within themselves. We were trying to play smart because some of the pins could slip up on you if you weren’t paying attention,” said Bahnsen. “We placed a lot of emphasis on pin locations and where the green sloped, and we were able to determine when we could go right at the pin and when we needed to aim off. We just gave ourselves very good chances.”

Sagstrom’s 2-under play on the par threes tied for best of the day on those holes.

Of Sagstrom’s round, Bahnsen said, “I’m really proud of her and for her. She’s been in a good position and is just taking it one day at a time. She gave herself a lot of opportunities, and was able to take advantage of a few of them. It’s great.”

The second round begins at 9 a.m. with admission free to the public. LSU, Tulane and UCLA will play in the feature wave beginning at 10:30 a.m. off the first hole. The final round is set for Tuesday.