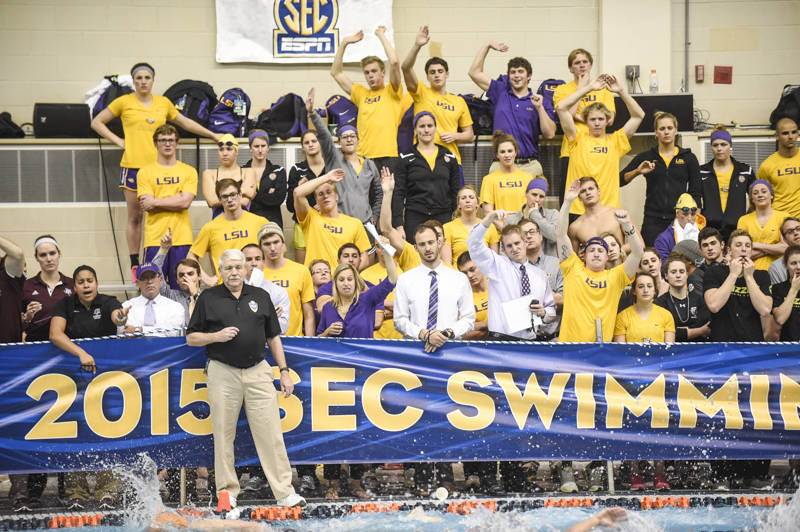 AUBURN, Ala. — Senior Daniel Helm collected his second silver medal of the meet, this time on platform, with a personal best score and the second highest in school history (416.80).

LSU concluded SEC Championships with nine school records, seven medalists, one SEC record and the highest point earner in school history. LSU was also the only school to have a diver in every final for both men and women.

Senior diver Alex Bettridge was also named SEC Female Diver of the Meet after an incredible performance. Bettridge collected gold on one-meter, silver on three-meter and bronze on platform. The Austin, Texas native was one point shy of earning the most points on the women’s side for the meet.

“I couldn’t ask for more from our divers from the beginning to end,” LSU diving coach Doug Shaffer said. “I don’t think there was anything else we could have done. We had the most medals this week than any other LSU team at SEC Championships. I couldn’t be prouder of this team and now it’s time to focus on NCAA Championships.

LSU finished fifth on the women’s side and ninth on the men’s side. The finish of fifth is the best finish since the 2011-12 season.

“I’m thrilled with the performance from these athletes throughout the week,” LSU swimming coach Dave Geyer said. “Placement wise I thought there was more opportunity for us. Regardless we move on and pick up our training for NCAA Championships.”

Sophomore Devon Dabney swam to the second-fastest 1650 free time in school history on the way to a 14 place finish. Dabney’s 1000 free split of 9:54.02 also sits at third on the school’s top time list.

Michael Young and Daniel Swietlicki competed in the ‘C’ final of the 200 back. Young finished third overall with a time of 1:44.28. Young’s time is a personal best and the third-fastest time in school history. Swietlicki finished eighth in the final.

Colleen O’Neil wrapped up the individual swimming events with an eight-place finish in the ‘B’ final of the 200 breast. O’Neil’s time of 2:13.24 in prelims was the third-fastest time in school history.