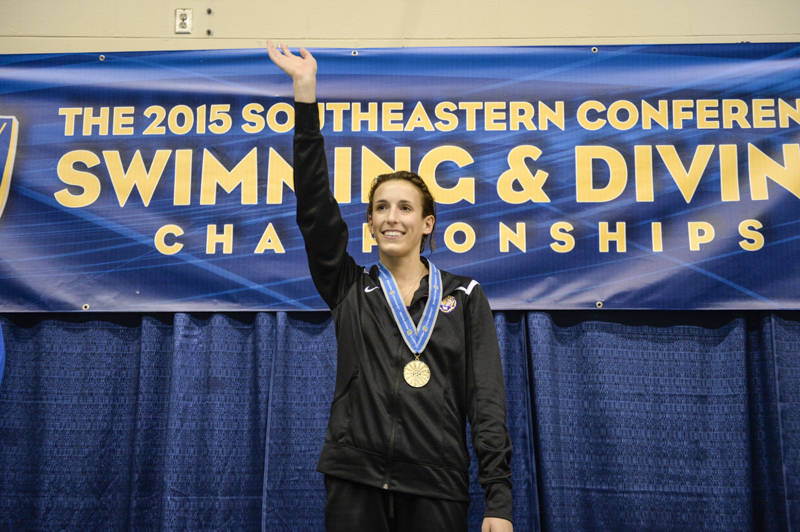 “On the women’s side today the platform event was really the culmination of the goals we set at our first team meeting,” LSU diving coach Doug Shaffer said. “Our divers embraced the goal and worked together to get two on the medal stand.”

Alex Bettridge earned her third medal of the championships with the second-highest score in school history (307.10). The senior earned bronze on platform. Bettridge ends the meet by accounting for 87 point, which is the most in LSU Swimming and Diving history.

LSU’s SEC Champions in All Sports

“Alex’s performance at the SEC Championships was impressive,” Shaffer added. “She had a gold, silver, bronze, a personal best in each event, school record, SEC record and I don’t think you could ask for anything else.”

The men’s relay team of Logan Rysemus, Silas Dejean, Frank Greeff and Alex Linge swam an ‘A’ cut and set the school record in the 400 medley relay with a time of 3:09.23.

The LSU women’s team of Caley Oquist, Colleen O’Neil, Amber Carter and Leah Troskot also swam to an ‘A’ cut and broke the school record with a time of 3:35.32.

With just one day remaining, LSU sits in fourth place with 614 points on the women’s side and the men are in seventh with 420 points.

“We capped off the evening with a win on platform and two school records for our 400 medley relay teams,” LSU swimming coach Dave Geyer said. “When you add in Kara lowering her 200 fly record it was a great day. I’m really proud of those four men who responded with an ‘A’ cut after some tough racing already. We’re in the mix in team standings and we need to come out firing in the morning.”

Greeff made yet another championship final, this time in the 200 fly. Greeff finished seventh with a time of 1:43.34. In prelims, the senior posted a time of 1:43.15 which was just .01 seconds off his school record time.

Sophomore Kara Kopcso broke her own school record in the 200 fly with a time of 1:56.06. Kopcso finished seventh in the championship final.

In the ‘B’ final of the 100 back, Rysemus and Michael Young finished fourth and eighth respectively. Rysemus’s time of 47.21 was a personal best and he remains at fourth on LSU’s top times list. Young’s prelim time of 47.58 was also a personal best.

Oquist finished sixth in the championship final of the 100 back for the second straight year. The junior tallied a time of 52.95 in finals and a season-best time of 52.76 in prelims.

Silas Dejean and Harry Ackland reached the ‘C’ final of the 100 breast. Dejean reached the final with the sixth-fastest time in school history (53.89). In the final, Ackland finished fourth (55.03) and Dejean finished fifth (55.14).

The LSU Swimming and Diving team returns for the final day of SEC Championships tomorrow at 10 a.m. The Tigers will compete in the 100 free, 200 back, 200 breast, men’s platform and the mile.