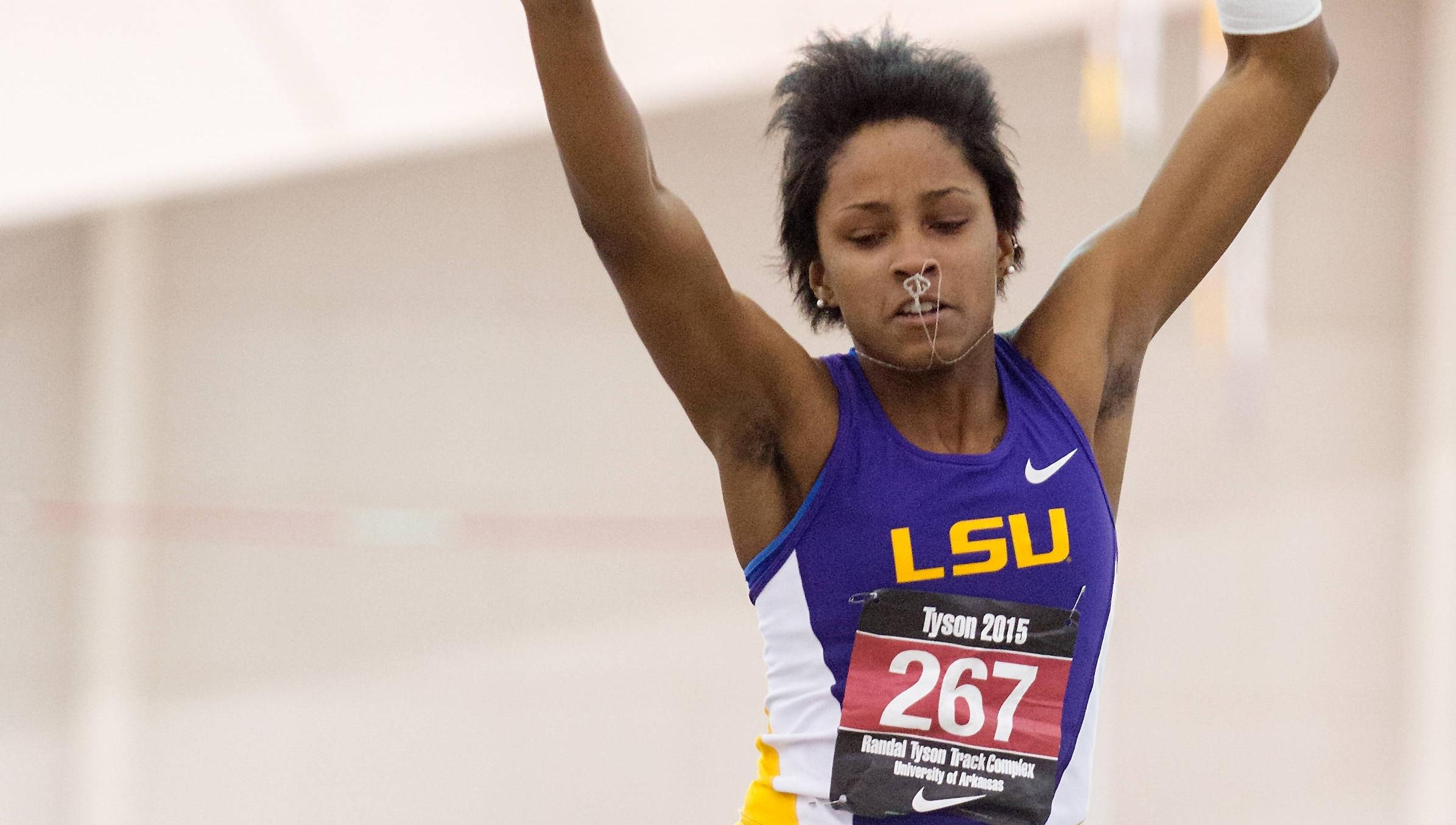 It was a night that also saw former Lady Tiger All-Americans Kelly-Ann Baptiste and Jasmin Stowers smash Carl Maddox Field House facility records as Baptiste took home the women’s 60-meter title in 7.19 seconds and Stowers stormed to victory in the women’s 60-meter hurdles with a personal best of 7.90 to rank among the World’s best for the 2015 indoor season.

But it was Friar who improved her qualifying position for the NCAA Indoor Championships with her second jump of the women’s long jump competition as she hit the board and landed 20-6 ½ into the pit to finish more than two feet beyond her nearest competitor with the NCAA’s No. 15-ranked mark this season. U.S. Express Track Club’s Tashania Bean finished runner-up to Friar with a mark of 18-6.

Friar stepped onto the runway Friday night with a previous seasonal best of 20-5 ¾ that she set in the invitational final at Kentucky’s Rod McCravy Memorial Track & Field Meet back nearly a month ago on Jan. 23.

“I felt OK, but I know I can jump a lot better. It was good to know I can at least get a good one off early in my series like I did today,” Friar said following the meet. “I know for a fact my landing is something I need to get a little better at and work on over the next week. I’ll just try to hit on that at practice, make sure my legs are healthy and make sure they stay fresh. I know if I hit the board right, I’ll just fly and be just fine.”

Friar looks forward to solidifying her NCAA qualification in both the long jump and triple jump next week when she returns to the site where she set her previous long jump seasonal best of 20-5 ¾ at Kentucky’s Nutter Field House, which is set to play host to the 2015 SEC Indoor Track & Field Championships on Feb. 27-28.

“When next week comes, I know I’m going to have to improve to make sure I qualify,” Friar added. “That’s where I got my original seasonal best at Kentucky, so I already have a feel for the runway a little bit, and know what to expect. They actually have a pretty good runway that’s elevated a little bit and it’s nice and bouncy, so I’m hoping to pop a couple of good ones off there next week.”

Also cracking the NCAA’s Top 30 with his performance on Friday night was Tiger senior Andreas Duplantis, who went up and over the bar at 17-4 ½ to claim his first men’s pole vault title of the 2015 indoor season.

LSU’s freshman trio of Gabby Figueroa, Sidnie Wilder and Marvalyn Vernon got the ball rolling in the field events as each turned in a seasonal best in the women’s weight throw in the first event for the afternoon.

Figueroa unleashed a seasonal-best mark of 61-1 ¼ on her second throw to lock up third place in the event and move herself into the No. 5 place on LSU’s all-time indoor performance list in the women’s weight throw. She secured third place behind Southeastern Louisiana’s Misha Frazier (63-11) and Northwestern State’s Rechelle Bessard (62-2 ¼) while topping her previous seasonal-best throw of 60-2 by nearly one foot.

Wilder also cracked LSU’s all-time Top 10 list with her performance on Friday afternoon when she let loose a personal-best throw of 58-10 ¼ in the fourth round to follow Figueroa in fourth place overall. Vernon posted her career-best throw of 51-7 in the fourth round as well as she rounded out the Lady Tigers in the field with a sixth-place finish.

“We picked up a few good performances here tonight, particularly in the field events,” said LSU head coach Dennis Shaver of Friday’s LSU Twilight meet. “Nataliyah, especially, got herself just a little bit closer to making sure she’s in the NCAA meet. All of our athletes across the board know they’ll have to raise their game next week when we have our last chance to qualify at SECs.”

Senior Philip Primeaux and sophomore Blair Henderson raced to indoor personal bests of their own to lead LSU’s seven event winners on the track during Friday’s action at the LSU Twilight in Baton Rouge.

Running just his second 3k of this indoor season, Primeaux outclassed the field as he crossed the finish line with a winning time of 8 minutes, 22.53 seconds to finish nearly 23 seconds ahead of teammate Travis Pope in second place overall at 8:45.48. Primeaux’s winning run converts 8:16.75 on a banked track for a new indoor personal best and the No. 10-ranked performance in school history in the event.

Primeaux was actually one of two members of LSU’s distance crew to earn a spot on LSU’s all-time Top 10 performance list in the indoor 3,000 meters during Friday’s competition as Lady Tiger junior Andria Aguilar ran a time of 10:05.97 to take second place in her first collegiate 3k indoors on the women’s side. Aguilar’s time converts to a personal best of 10:00.81 to become the seventh-fastest 3k runner indoors in team history.

Henderson scored a nearly four-second victory in the men’s 800 meters when he crossed the finish line in 1:51.26, converted to 1:49.69 on a banked track for a new indoor personal best in the event. Henderson ended the race just a split second quicker than his previous indoor PR as his converted time of 1:49.69 bested the 1:49.70 he set as a true freshman in 2014.

As they did throughout their decorated careers with the Lady Tigers, Baptiste and Stowers provided the fireworks on the track during Friday’s action with a pair of record-setting performances on the night.

Just one week after setting a new personal best of 7.92 in her runner-up finish in the women’s 60-meter hurdles at the 108th Millrose Games in New York, Stowers twice smashed the Carl Maddox Field House record in the event when she qualified in 8.03 in the prelims and took the title in 7.90 in the final to emerge as the No. 2-ranked hurdler worldwide for the 2015 indoor season with her efforts.

While smashing Lolo Jones’ 6-year-old facility record of 8.07, Stowers crossed the finish line ahead of New Orleans’ Alexia Fortenberry in second place with a time of 8.24 and former Louisiana Tech standout Kim Francis in third place with a time of 8.30. LSU’s Daeshon Gordon followed in fourth place at 8.48 and Mariah Georgetown rounded out the Top 5 in fifth place at 8.50 in the final.

Stowers is off to a flying start in her first full season on the professional circuit after wrapping up her collegiate career as a seven-time All-American and five-time SEC Champion in four seasons from 2011-14. She ran an indoor school record of 7.96 in the hurdles while capturing her second-straight NCAA Indoor bronze medal a year ago.

Baptiste ended her collegiate career in 2008 as a double NCAA Champion in the 60-meter and 100-meter dashes that season while earning 14 All-America honors in four seasons in Baton Rouge from 2005-08.

With Friday’s LSU Twilight meet now in the books, LSU’s athletes have polished off their preparation for the championship season as they will next make their return trip this season to Kentucky’s Nutter Field House in Lexington next weekend to compete at the 2015 SEC Indoor Track & Field Championship running Feb. 27-28.