Softball Off to Second-Best Start After Sweep 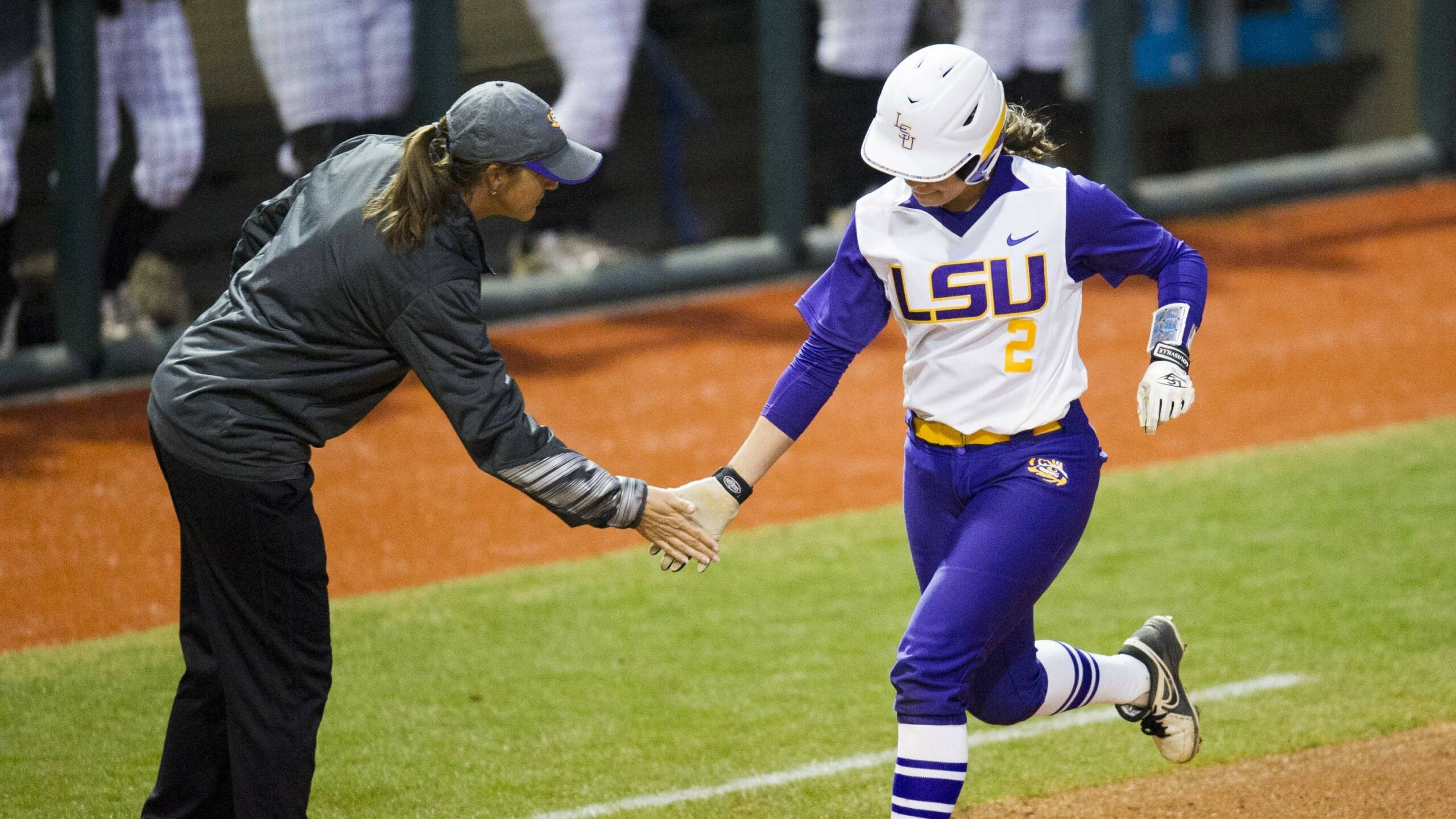 PALM SPRINGS, Calif. – After earning a hard-fought win earlier in the day, the LSU softball team got off to another slow start but finished with a bang as the Tigers defeated the Cal State Fullerton Titans 8-0 in six innings to close day one of the Mary Nutter Collegiate Classic for the team and secure the squad the second longest season-opening winning streak in program history in the process.

LSU (13-0) pounded out its eight runs on 10 hits, as eight different Tiger batters accumulated at least a hit on the night. After scoring just a pair of runs in the first, fourth and fifth innings, LSU exploded for five runs in the sixth to put the game away for good, holding on to the shutout in the end for the run-rule victory.

Sahvanna Jaquish, who finished with six total RBIs on the day, earned two in this context, going 2-for-2 with a double and two RBIs. Kellsi Kloss went 2-for-3 with two runs scored, as A.J. Andrews and Constance Quinn each produced RBIs on their only hits of the night.

Like much of this early season, LSU freshman Allie Walljasper found her rhythm and worked out of jams to improve to 5-0 on the season, earning her fourth complete-game victory and third shutout, striking out a season-high 10 with three walks to just four hits. She helped her own cause in a big way at the plate as she hit the team’s second grand slam of the day and on the season in the sixth to finish 1-for-3 with four RBIs and a run scored.

The momentum of the game shifted dramatically with one play for Cal State Fullerton (7-5) as Andrews made arguably the biggest play of the game in robbing a home run to keep the Titans off the board when LSU was only up one. CSF fell apart after that as Walljasper retired the next 11 and was never able to muster anything more than back-to-back hits in the final inning.

Desiree Ybarra (2-1) suffered the loss for the Titans, pitching five innings and allowing three runs, two earned, on six hits with six walks and three strikeouts. Christina Washington came on and pitched the final inning, allowing five runs on four hits with a walk and a strikeout.

After consecutive grounders to third base, Bianka Bell was hit to take first and the two out rally was on as Jaquish ripped a double to the gap in right center to score the shortstop and put the Tigers up 1-0.

The Titans came back in the bottom half of that same inning, as after a groundout an infield single put one on for Cal State Fullerton, with a walk putting two on. With a pinch runner coming on for the other side, Walljasper got a big strikeout to get the second out, as a grounder to Bell at short ended the threat.

LSU was cruising and looking to get out of the second unscathed, but a walk put a runner on for the Titans, with a single to right center putting runners at the corners for Cal State Fullerton. Another walk loaded the bases for the opposition, but fortunately for LSU a fly out to Griggs in left ended another CSF threat.

Andrews kick started the third inning with a double to right. A sacrifice bunt by Bailey Landry advanced the outfielder to third, but that’s as far as she advanced as a strikeout, walk to Jaquish and grounder ended the inning with a grounder to short ending the inning.

In the very same inning against the first batter, a sky-high shot that was bound to clear the fence was somehow grabbed by A.J. Andrews in a diving effort on the other side. After a lengthy discussion, the call stood and LSU stormed from there as Walljasper got two strikeouts to end the frame.

Sandra Simmons put down a bunt single and advanced to second after a throwing error, as Walljasper drew a walk to put two on. Jenna Kreamer came on to run and after a crazy play Simmons stole third to put runners at the corners. A walk to Quinn loaded the bases, as a strikeout after proved to be the first out. Andrews hit a deep enough fly to left to score Simmons and put LSU up 2-0. Landry earned an infield single to put three back on for LSU.

Jaquish earned a walk to take first, as Kloss ripped a single to put two on for LSU in the top of the fifth. A sacrifice bunt by Simmons advanced the runners to second and third, as Walljasper hit into a fielder’s choice that forced out Jaquish at home for the second out. However, Quinn laced a double down the right field line to score Kloss and put LSU up three.

Andrews led off the top of the sixth with a walk to reach first, as after a strikeout a single by Bell up the middle put runners at the corners. A single by Jaquish down the right field line scored Andrews to make it 4-0 Tigers. Taylor Lockwood came in to pinch run as Kloss singled to right to load the bases. Walljasper took over from there as she took a full count as far as she could before crushing one out of the park for the slam and making it 8-0 LSU.

In the first game of the Mary Nutter Collegiate Classic for the LSU softball team, the Tigers spotted the San Diego State Aztecs a run in the opening inning, but that would be the last the opponents would see as the Tigers scored six runs including the team’s first grand slam of the season from the bat of Sahvanna Jaquish in a 6-1 victory Thursday in Palm Springs.

A.J. Andrews and Bailey Landry each had two hits for LSU (12-0) in the game, with Landry going 2-for-4 with two RBIs and a run scored, while Andrews went 2-for-3 and scored twice. Jaquish had the hit of the day, as her only hit cleared the fence to give LSU some insurance runs as she went 1-for-4 with four RBIs and a run scored.

Baylee Corbello (4-0) earned the win as she allowed an unearned run on six hits with four walks and a strikeout, with Carley Hoover pitching two innings of relief striking out two.

San Diego State’s (7-4) Erica Romero suffered the loss for the Aztecs, falling to 6-4 on the season, as Monica Downey was the only SDSU player with two hits in the contest

San Diego State was gifted an error that put a runner on second to open the bottom half of the first inning. That one miscue snowballed for the Tigers as that run eventually came in to score as an unearned run, but fortunately LSU was able to hold firm and not give up anything past that to only trail one after one.

The Tigers opened the top of the third inning with a walk to Quinn to put one Tiger on with no outs on the board. After a diving catch in center for the first out of the frame, Andrews got plunked hard to take first and put Quinn into scoring position. The two advanced after a low throw by the catcher trying to go to second, and it proved costly as Landry ripped a high chopper through the infield to score both to make it 2-1 Tigers.

LSU came back in the top of the fourth inning and got a leadoff single by Kloss to take first. Simmons drew a walk to put two on for the Tigers, as the catcher advanced to third after an errant throw to first allowed her to move to third, but Simmons was caught trying to steal second, a strikeout and grounder to first ended the inning.

After a strikeout to open the fifth inning, Andrews earned an infield single to reach first, as Landry earned her second hit of the afternoon to put two runners on for LSU. After a pitching change, a walk to Bell loaded the bases and that proved to be a costly one as Jaquish, down to her final strike, launched one clear over the fence for the grand slam to put LSU up 6-1.

With two outs already on the board for the Tigers in the top of the sixth, Griggs drew a walk to take first. After she stole second, Andrews went to the tenth pitch of her at bat before garnering an infield single to put runners at the corners. Unfortunately, a swinging strikeout ended the Tiger threat.

A fielding error and consecutive hits ended Corbello’s night in the bottom of the sixth inning, as Hoover came on in relief. She got the strikeout to get the first out, as on the next play a chopper to Jaquish at third resulted in the force out at home, with Quinn making a highlight-reel play at second for the final out to end the inning.

LSU will be back in action on Friday, taking on the No. 13 Arizona Wildcats at 5:30 p.m. CT in Palm Springs.