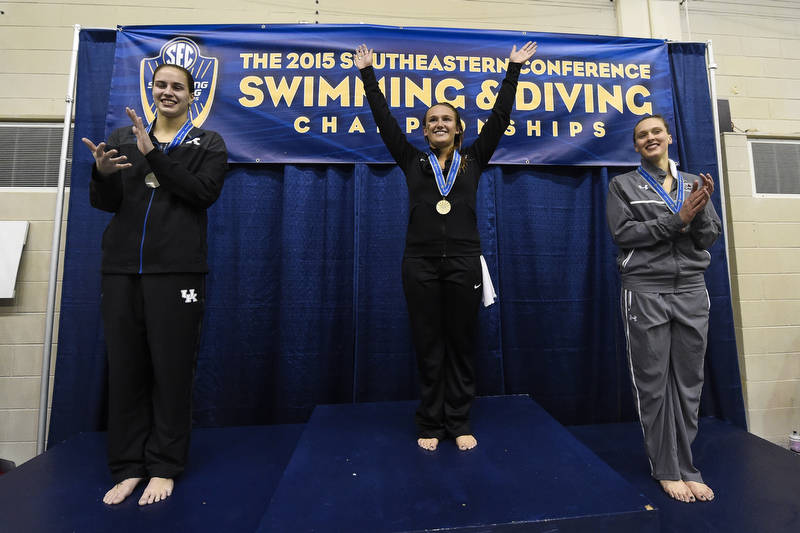 AUBURN, Ala. — Diver Alex Bettridge captured first place, set the school record and set the Southeastern Conference record on one-meter on the second day of SEC’s. Bettridge posted a score of 350.30 and took first by 20 points.

“It’s still kind of new to me and I wasn’t expecting it,” Bettridge said. “I had no idea where I was on the leaderboard because I was just zoned in. I think winning tonight gives our group momentum going forward. One of our goals is to go 1-2-3 on platform. After tonight, I think it’s possible and I’m looking forward to the rest of the week.”

The senior became the 33rd SEC Champion in LSU women’s swimming and diving history. Bettridge had compiled 266.8 points with just one dive remaining. Needing just 40 points to capture the win, Bettridge tallied a score of 61.10 to secure gold.

“There are few moments in coaching when you’re blessed to have everything just comes together,” Shaffer said. “Alex was in the right position with the right opportunity. She competed in a manner that allowed her to shine in the best way that she could to become an SEC Champion, secure the SEC record and break the LSU record.”

“This was incredible to see her perform at this level. I usually watch the scores but today I just watched her perform. She was in complete control and I knew she had it in her. It was fun to watch her compete and see it go her way.”

In addition to Bettridge’s performance, Weil also reached the final on one-meter. Weil finished eighth with a score of 311.65. Allie Alter scored for the Lady Tigers with a ninth-place finish and a score of 261.25.

The LSU women sit in fourth place after two days with 321 points, while the LSU men are in ninth place with 189 points.

“It was a solid day for us,” LSU swimming coach Dave Geyer said. “There were definitely some things we could have done better in the morning for better placement at night. At the same time we had some swims where our team stepped up and outperformed our expectations in both session. The spotlight tonight definitely goes to Alex for her incredible performance on the diving board.”

Amber Carter wrapped up the individual events on day two by finishing fifth in the “B’ final of the 50 free with a time of 22.61.

In the 200 IM, Daniel Swietlicki and Logan Rysemus added more top times. Swietlicki posted a time of 1:48.70 for the eighth fastest time in school history. Rysemus finished the individual medley event in 1:48.97 to move one spot up in the list to 10.

“There are still three more full sessions ahead of us so we need to keep looking forward and taking each day as they come,” Geyer added.