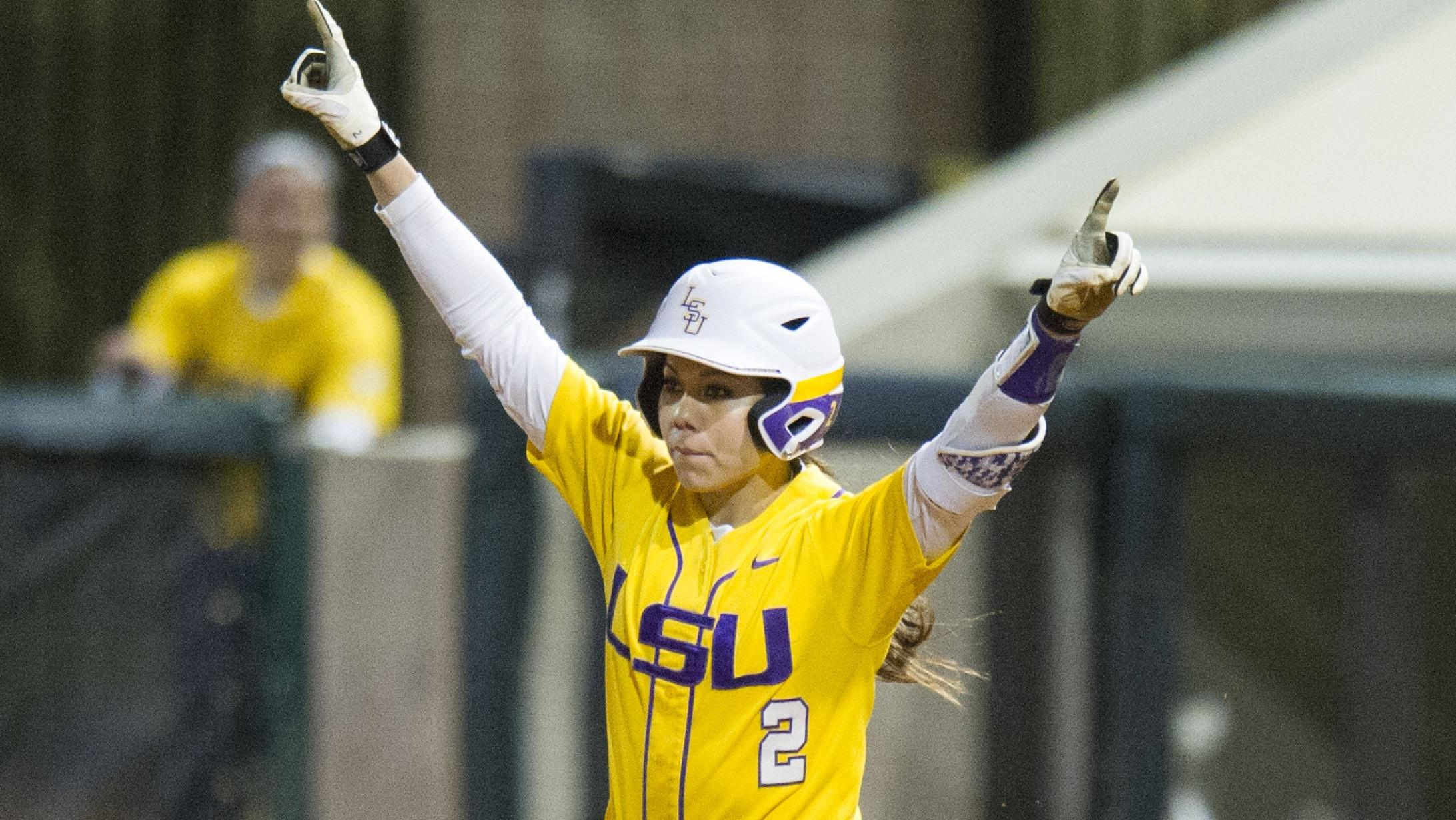 BATON ROUGE, La. – After watching the visiting Louisiana Tech Lady Techsters take the lead after an error-prone top of the seventh, the No. 14 LSU softball team stared down its final three outs and did not flinch as the Tigers got a walk-off, three-run home run from the bat of Sahvanna Jaquish to cap the comeback and push its record winning streak to 11 in a 7-5 win Tuesday night at Tiger Park.

After watching a three-run lead evaporate over the course of the contest and see the visitors steal the momentum and the lead with one half inning left to play, the Tigers (11-0) mustered a rally for the ages as the squad earned four runs on three hits, not recording an out, with the fireworks from the sophomore Jaquish clearing the bases and securing the victory.

“Obliviously, we didn’t play very well. I don’t know if we could have played much worse honestly,” head coach Beth Torina said. “I am happy we found a way to win in the end. I think that is what matters. Our team is capable of playing like that and still get a win.”

LSU pounded out 11 hits in the contest to Louisiana Tech’s (6-5) eight, as eight different Tiger batters registered a hit. Jaquish led the night going 3-for-4 with four RBIs and a run scored. The only other player to register multiple hits on the night was Bianka Bell who extended her hitting streak to nine games going 2-for-3 with an RBI and two runs scored.

“I can give LA Tech credit. They came out strong and they stuck with us but I’m so happy our team won today,” Jaquish said. “We really focused on getting our hits to the inside pitch which was the pitch I hit out today. I’m happy I got there because the pitcher kept jamming me on the inside but finally I got my hit through.”

Sandra Simmons earned one of two LSU doubles on the day, while Constance Quinn hit her first home run of the season in the second inning to put the Tigers up three.

In easily one of the most subbed contests of the season, the LSU pitching staff used three pitchers on the night, ending with Allie Walljasper (4-0) earning the win after pitching the final 1.1 innings allowing two runs, none earned, on two hits with two strikeouts. Starter Carley Hoover pitched four innings, allowing one unearned run on three hits with five strikeouts and three walks, but carded the no-decision after reliever Kelsee Selman pitched the next 1.2, giving up three hits, including the game-tying two-run home run in the fifth to make it a new game.

“This game was really crazy but it was also really fun,” Walljasper said. “It was incredible to see every individual come out and show their strength during the game.”

Six of Louisiana Tech’s eight hits came from two players in Tori Charters and Krysta Tutsch, who combined for six, but the shot of the day came from utility player Pauline Tufi who had the home run to tie the game late for the Lady Techsters. However, Louisiana Tech was in the same boat as the Tigers, using three pitchers in various spots throughout the day, eventually ending with Bianca Duran (3-5) earning the loss after allowing three runs on five hits with two walks after pitching the final 2.2 innings of the game, while Tufi was the one to give up the home run to Jaquish to seal the win in the end.

A.J. Andrews led off the inning with a walk to put the first Tiger runner on base in the bottom of the first. After advancing to second on a wild pitch, she moved to third after an illegal pitch as Louisiana Tech switched pitchers with three balls to Bell already on the board as she drew a walk on the next pitch to put runners at the corners. Jaquish looked like she was going to fly out to right, but a hit allowed Andrews to score to make it 1-0 LSU.

Simmons stepped up next and ripped a single to right center, scoring Bell to make it 2-0, but on the same play Jaquish was caught in between third and home for the third out of the inning.

With two outs in the bottom of the second, all Quinn needed was two pitches before launching one to straightaway center for the solo shot to make it 3-0 LSU.

Louisiana Tech threatened in the top of the fourth inning, as a walk put one Lady Techster on base. A single through the middle put two on, as a fielding error loaded the bases on a fielder’s choice to put the pressure on the defense to halt the rally. Hoover got a big strikeout for the first out of the inning, as a shallow fly to center held everyone at the bases. However, a walk brought one run in to make it 3-1, but Hoover came back with a strikeout to end the frame.

Selman came in to relieve Hoover in the fifth and got the first out, but a single put a runner on for Louisiana Tech. After getting a strikeout, Tufi hit a sky-high shot that cleared the fence in center to tie the game at 3-3.

In the bottom of the fifth, Andrews opened the frame with a single through the middle, advancing all the way to third, but no one could drive her in leaving her stranded.

Kellsi Kloss singled up the middle to open the sixth, as Taylor Lockwood came on to pinch run for the catcher. Simmons put down a sacrifice bunt to move Lockwood to second, as Emily Griggs was next up and drew a walk to put two on, but a fielder’s choice grounder to short and grounder to second ended the inning for LSU.

Louisiana Tech finally broke through in the seventh inning after Walljasper entered in the sixth, scoring two runs due to two errors to take a 5-3 lead over LSU. The final inning began with an opening-batter walk to Andrews to put one on first for the Tigers. A single through the left side by Bailey Landry put two on, as Bell’s ripped double over the head of the center fielder scored Andrews to make it 5-4 with the tying run at third and winning run at second.

Down in the count at 1-2, a hit or sacrifice fly into the outfield would have easily tied the game. Instead, Tufi left one over the plate and Jaquish drove one sky high to the berm for the three-run shot and walk-off home run to give LSU the win.

LSU now hits the road, traveling to California to participate in the Mary Nutter Collegiate Classic, beginning Thursday with a game against San Diego State.