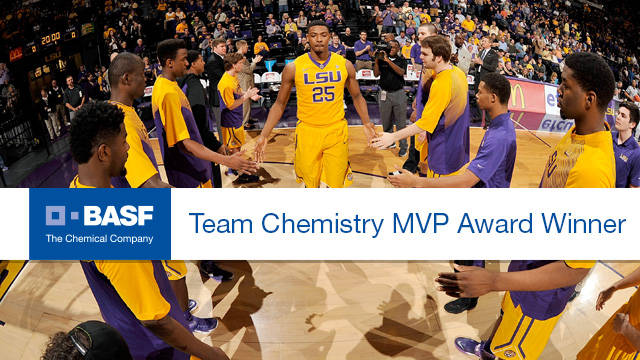 BATON ROUGE – After starting SEC play with a 5-2 record and climbing up to second place in the SEC standings, the LSU men’s basketball team has been named among the university’s athletic programs with the BASF Team Chemistry MVP Award for the month of January.

LSU ripped off five victories over a six-game span which included road victories versus Ole Miss, Florida and Vanderbilt. The Tigers also secured home wins over Georgia and South Carolina.

LSU picked up its first conference victory with a thrilling 87-84 double overtime victory over Georgia on Jan. 10 where the Tigers overcame a nine-point deficit with 2:21 remaining in the first overtime period. Tim Quarterman pumped in 11 of his career-high 27 points during the two overtime periods. He swished a pair of three-pointers and pushed the game into a second overtime with a traditional three-point play off a driving layup inside the final minute. In the second OT, Quarterman’s steal in the final seconds clinched the three-point win for the Tigers.

Four days later, LSU used a total team effort to upend Ole Miss by a 75-71 margin. Keith Hornsby racked up 20 of his 23 points during the second half and buried a career-high five treys. His clutch free throws with 5.7 seconds gave the Tigers a two-possession lead and the four-point win. The Tigers had three players chipped in double-doubles: Jarell Martin (18 points, 14 rebounds), Jordan Mickey (11 points, 11 rebounds) and Josh Gray (14 points, 10 assists). The 10 assists for Gray were a career-high.

Martin poured in a SEC career-high 22 points as the Tigers snapped Florida’s 20-game SEC home winning streak with a 79-61 triumph over the Gators on Jan. 20. The 18-point win equaled the largest road win during the Johnny Jones era. Martin eclipsed the 20-point barrier for the sixth time on the season. He was 7-of-15 shooting. LSU extended its five-point lead with a 14-2 spurt midway to take control of the contest midway through the second half.

It was Mickey’s turn to set a SEC career-high with 25 points as LSU rallied from an 8-point deficit during the final 17 minutes to grind out a 79-75 overtime win at Vanderbilt. The Tigers improved to 3-1 in overtime games on the season. Mickey was an efficient 7-of-8 from the floor during the final 25 minutes of the game. Martin provided 19 points and 12 rebounds, while Quarterman stepped up with six of his 12 points during overtime.

LSU collected its third consecutive win courtesy of a 12-2 flurry over the final 2:45 of the contest to battle back for a six-point win over South Carolina. Quarterman came away with 11 of his 16 points in the second half followed by Keith Hornsby‘s 15 points. LSU’s defense registered 13 blocked shots, the most during the Jones era. Mickey’s six rejections enabled him to move into second place on LSU’s all-time blocks list. He’s totaled 177 career blocks and notched at least five blocks 18 times during his career.

Over its first seven SEC games, LSU paces the SEC with 15.3 assists, 8.1 steals and 7.4 blocked shots per game. The Tigers also rank third on the conference leaderboard with 73.6 points per game and has limited opponents to a 39.0 percent field goal percentage. Mickey (15.3 PPG), Quarterman (14.4 PPG) and Martin (13.9 PPG) are ranked among the SEC’s Top 10 in scoring, while Mickey’s 3.9 blocks per game are among the nation’s Top 10.