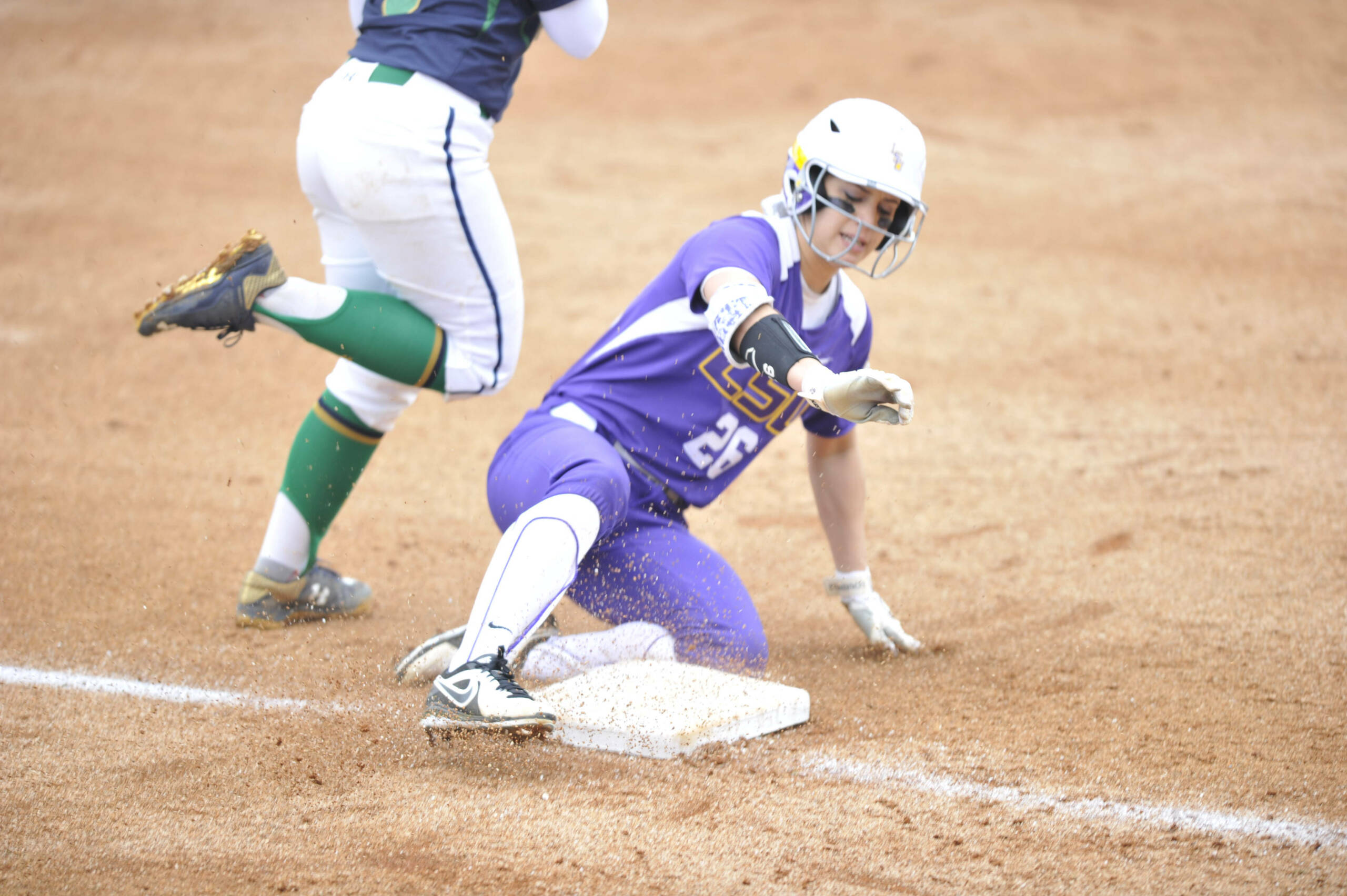 BATON ROUGE, La. – Trailing an opponent for the first time all weekend, the No. 16 LSU softball team showed its grit by storming back and overtaking the No. 20 Notre Dame Fighting Irish late to earn a 7-1 victory in the final game of the 2015 Tiger Invitational and move to 10-0 on the season.

After giving up an opening run in the very first frame, the Tigers tied the game in the third, before scoring three runs in back-to-back innings in the fifth and sixth to pull away for good and extend the team’s hot start streak to double digits, the first time the team has been 10-0 since 2007, while it is also the best start for head coach Beth Torina in her coaching career.

“I think our team showed a ton of fight at the end,” Torina said. “They made a pitching change at the end that helped us out. They are very talented as well and we came out and hit the ball well. Their starter did a nice job for them as well after pitching all weekend.”

LSU mustered just one hit in each of the first four innings against Notre Dame (5-4), but in their final two innings at the plate in the fifth and sixth, scored six runs on seven hits to gain some distance on the Fighting Irish, ending the contest outhitting ND 11-4.

Seven different Tiger batters earned a hit on the day, led by Bailey Landry who accounted for four of the 11, going 4-for-4 with a double, two runs scored and a stolen base. Sahvanna Jaquish had the shot of the day as she connected for her third home run of the weekend to finish 1-for-4 with three RBI and a run scored.

“We had confidence in our offense, and we got the job done,” Landry said. “We were making different adjustments and doing what we needed to do to get our job done.”

After coming on for the save in a tough spot last night, freshman Allie Walljasper (3-0) earned the start in the circle and worked through that Notre Dame run in the first to shut out ND for the rest of the game allowing just four hits with two strikeouts and no walks in the complete-game effort. She also helped her cause at the plate going 2-for-3.

“I really trusted in my defense the whole time,” Walljasper said. “They’re working really great behind me, and, of course, coach is calling awesome pitches and getting me through everything.”

Notre Dame starter Rachel Nasland earned the start, pitching four complete innings, coming off of pitching six in the previous game Sunday, to give up one run on four hits with three walks, as Allie Rhodes (2-2) suffered the loss by pitching the final two and giving up six runs, three earned, on seven hits with one walk and three strikeouts.

Jenna Simon earned two of ND’s four hits going 2-for-3, with Karley Wester and Casey Africano having the other two.

Notre Dame got consecutive hits to start the game, as a sacrifice bunt moved the runners into scoring position. A sacrifice fly drove in one run to give the Irish an early 1-0 lead, but that would be the only run that crossed as a fly out to right ended the half inning.

A leadoff walk to A.J. Andrews put some speed on the bases, as the senior stole second then moved to third after Landry put down a bunt single. Landry stole second to put two in scoring position, but a sharp grounder to second was hit well enough to get the throw back to the catcher to throw out Andrews at home, but Landry was able to move to third and Bianka Bell to second for the first out. Unfortunately, consecutive pop-ups ended the inning for the Tigers.

Looking to get anything going, consecutive walks to Emily Griggs and Andrews put two on, as Landry put down another bunt single to load the bases. A fielder’s choice grounder forced Griggs out at home, keeping the bases loaded, Jaquish hit essentially a fielder’s choice option in the outfield, as the left fielder threw out Landry at third but allowed Andrews to score to tie the game at 1-1.

Still knotted heading into the bottom of the fifth, Andrews opened the frame with an infield single to second to take first. Landry singled to put two on as Bell ripped a shot that somehow stayed in the infield but allowing Andrews to score to make it 2-1. On the next play, Jaquish flied out to left, but the throw in sailed high and allowed Landry to score on the error to make it 3-1. After a strikeout, Bell scored on a wild pitch to make it 4-1.

With two outs already in the sixth, Landry smoked a double up the middle to take second. What should have been the third out on a Bell chopper to third instead resulted in a throwing error that allowed Landry to score and move Bell to second. Jaquish pounced on a 1-2 pitch and sent it dancing down the left field line and over the fence for the home run to make it 7-1 LSU. Kellsi Kloss hit her second double of the year soon after, but would be left stranded at second after a strikeout to end the inning.

“We really just made adjustments and busted it open,” Jaquish said. “All my teammates, it’s easier when they hit, so we string along hits, and it’s kind of contagious.”

From there, Walljasper got the final three batters to go down in order for the third time in the game to close the door and seal the win for the Tigers.

LSU will be back in action on Tuesday, hosting Louisiana Tech at 6 p.m. in Tiger Park. The game will be streamed live online on SEC Network+ through WatchESPN.