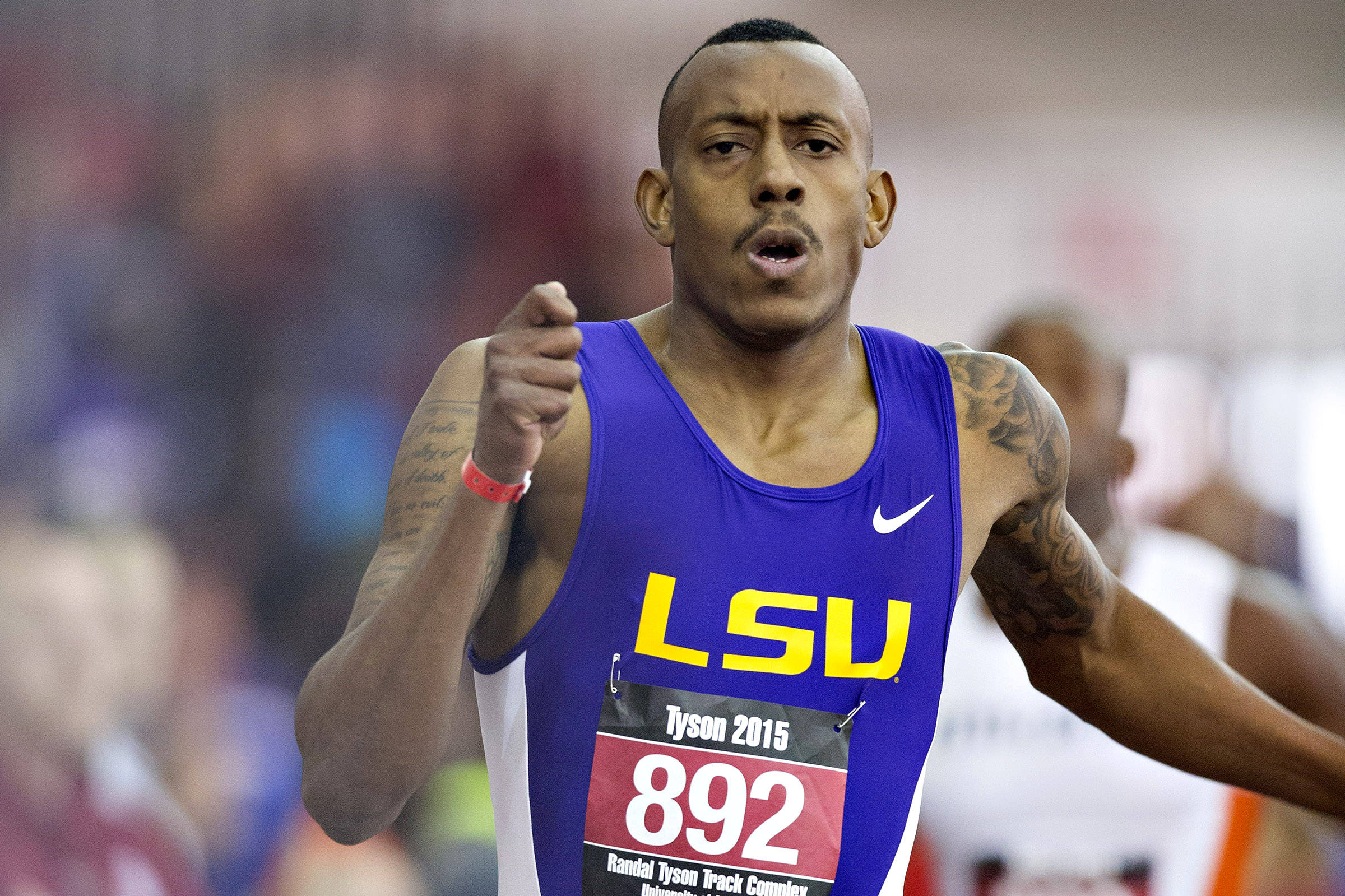 BATON ROUGE – With senior Vernon Norwood and sophomores Nataliyah Friar and Jada Martin leading the way with personal bests in Saturday’s finale at the Tyson Invitational, the LSU Track & Field teams wrapped up another strong weekend with meets held at Arkansas and Iowa State along with their home track at the Carl Maddox Field House.

While also finishing off the second day of action at the Tyson Invitational held this weekend at the Randal Tyson Track Center in Fayetteville, Arkansas, the Tigers and Lady Tigers also lined up at the Iowa State Classic at the Lied Recreational Center in Ames, Iowa, while hosting their own LSU High Performance Meet at the Carl Maddox Field House in Baton Rouge.

It was a split weekend in which LSU’s athletes combined for seven event wins, 19 indoor personal bests and six performances ranking among the NCAA’s Top 16 in their respective events for 2015.

Norwood captured LSU’s second event title of the weekend at the Tyson Invitational when she smashed his indoor personal best in the 200-meter dash to take the top spot on the podium in the men’s college section. A 400-meter sprinter by trade, Norwood cruised to an easy victory in the second heat with a time of 20.92 seconds to outlast Miami’s Jaalen Jones (21.49) to the finish line for the win.

Texas’ Senoj-Jay Givans finished runner-up in the final standings with a winning 21.05 in the fourth heat, while Baylor’s Kevin Harris rounded out the medalists in third place with a time of 21.17 to win the third heat.

Norwood, who already ranks No. 4 nationally with a seasonal-best time of 45.56 in his only 400-meter race of the year, smashed his previous indoor PR of 21.26 in the 200 meters with the 14th-fastest time by a collegian during the 2015 season. He also became the eighth-fastest LSU Tiger in the event indoors in school history with his victory.

Perhaps inspired by her teammate, Martin followed by racing to an indoor personal best of her own in Saturday’s finale at the Tyson Invitational when she clocked 23.30 to finish runner-up to the national-leading 22.81 by Florida’s Kyra Jefferson in the fourth heat and finish in sixth place overall in the championship division of the women’s 200-meter dash at the Randal Tyson Track Center.

After lining up with a previous best of 23.44 in winning the 200-meter title at Kentucky’s Rod McCravy Invitational on Jan. 23, Martin catapulted herself into the No. 8 spot on the NCAA’s performance list for this season and took another step toward earning qualification for the NCAA Division I Indoor Track & Field Championships with her indoor best of 23.30 on Saturday afternoon.

Also putting herself in NCAA qualifying position during Saturday’s competition at the University of Arkansas was Friar, who soared to a lifetime best of 42 feet, 6 inches for seventh in the women’s triple jump.

Friar enjoyed her most impressive series in the triple jump to date, opening with a mark of 41-11 ½ in the first round and following with jumps of 41-1 ½ in the second, 41-7 I the third and 41-10 ½ in the fourth rounds in the competition. That’s when she leaped to a lifetime best of 42-6 in the fifth round to take her place among the nation’s elite in the event.

With Saturday’s performance, Friar now finds herself ranked among the NCAA’s Top 16 in both horizontal jumps this season as her top mark of 20-5 ¾ in the long jump ranks No. 15 by a collegian in 2015.

Senior Rodney Brown got the ball rolling with a victory in the men’s weight throw as he let loose a series-best throw of 68-2 ¼ to take the title by nearly four feet over unattached athlete Justin Victor with a mark of 64-8 for second place. Tiger junior David Collins unleashed a personal best of 64-6 ½ for third place in the competition as he became the ninth-ranked performer in school history with his efforts.

Freshman Gabby Figueroa made it a clean sweep of weight throw titles for the home team when she captured the women’s crown with a top mark of 59-0 ¼ in the competition. Fellow freshman Sidnie Wilder had a PR throw for the second-straight meet as she posted a best on the day of 56-9 ¼ for third place overall.

Senior NCAA-title hopeful Tori Bliss continued LSU’s momentum in the throws by winning her fifth shot put title in as many appearances this season as she unleashed a winning throw of 56-8 ¾ on her final throw of the competition to eclipse Memphis’ runner-up Vivian Brandhoff (48-2) by more than eight feet on the afternoon. Bliss also threw 53-10 ½ in the first round and 55-2 ¼ in the fifth round of the competition.

The former NCAA leader in the event, Bliss is now the NCAA’s No. 2-ranked shot putter on the women’s side this season as she owns a lifetime best of 57-4 ¾ at Kentucky’s Rod McCravy Invitational back on Jan. 24.

Headlining LSU’s efforts on the track was junior Kiersten Duncan, who stormed to victory in the women’s 200-meter dash with a winning time of 24.50 in the first heat. Duncan’s race of 24.50 on the 200-meter flat track at the Carl Maddox Field House converted to a seasonal-best time of 24.12 in the event this season. The Lady Tigers actually swept the top two spots on the medal podium in the 200-meter dash as sophomore Ka’Lynn Jupiter won the third heat in 24.99 converted to an indoor PR of 24.60 in the event.

The Tigers and Lady Tigers will have one final opportunity to prepare for the championship season next weekend when they return home to play host to the annual LSU Twilight on Friday night at the Carl Maddox Field House in Baton Rouge. They will follow with a trip to Lexington, Kentucky, to compete at the 2015 SEC Indoor Track & Field Championships running from Feb. 27-28.