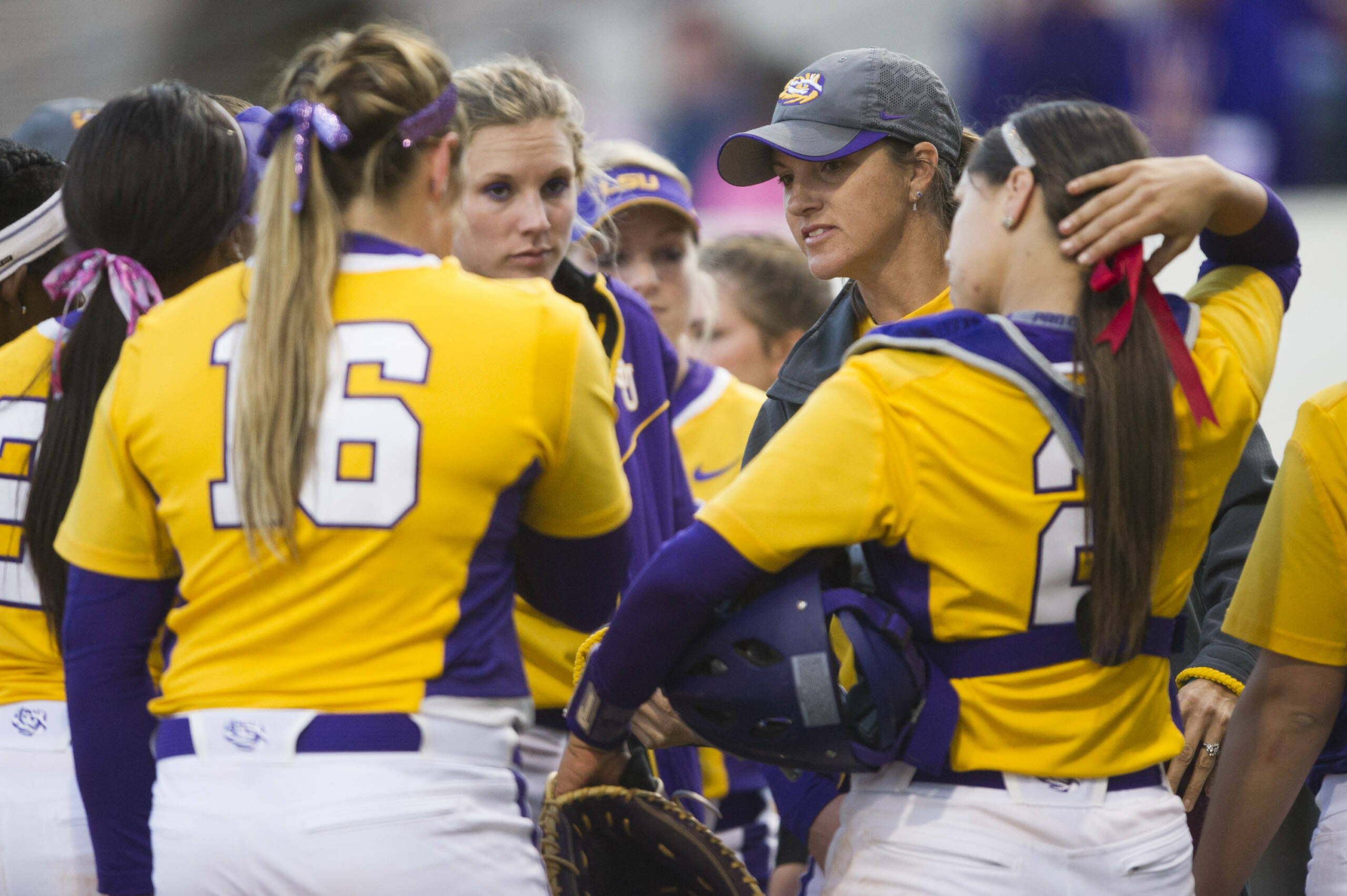 BATON ROUGE, La. – In a matchup of two top 25 teams, the No. 16 LSU softball team held on to a nail-biter and weathered the storm twice in the last two innings to prevail and defeat the No. 20 Notre Dame Fighting Irish, 3-2, in the team’s opening game on Saturday at the Tiger Invitational.

In the end, a three-run first inning for LSU (8-0) that included two hits and an error proved to be the difference in the contest, as Notre Dame (5-2) scored once in the second and third, with more chances throughout, outhitting LSU 9-3 over the course of the game. However, ND stranded eight runners on base Saturday, unable to plate any runs with bases loaded opportunities in the sixth and seventh.

“Today was a really nice day for us,” head coach Beth Torina said. “I think Notre Dame is a really quality program they threw who appears to be there number one at us and I thought we gave them a good game.”

LSU starter Carley Hoover (2-0) made her second start and fought through the Notre Dame lineup, earning the win after giving up both Irish runs on six hits with three strikeouts and a walk in five innings of work, as in the crucial moments Allie Walljasper stood firm and pitched the final two allowing three hits, but no runs with three strikeouts to claim the save.

All of the Tigers’ three hits on the day were for extra bases, coming from the bats of Bianka Bell, Sahvanna Jaquish and Sandra Simmons. Bailey Landry didn’t register a hit, but her sacrifice bunt led to the Notre Dame error that ignited the LSU scoring in that very first inning.

“We were staying confident,” Landry said. “We were keeping a good head on our shoulders, listening to what the coaches were telling us, and just playing our game.”

ND’s Rachel Nasland (1-1) suffered the loss after giving up three runs, one earned, with six strikeouts to just two walks. Nasland was efficient the rest of the way, as three different Irish players finished with two hits on the day, including a solo home run from Micaela Arizmendi.

A leadoff walk in the very first inning almost proved costly early for the Tigers, as a sacrifice bunt advanced the runner to second. A grounder to Bell at short was the second out, with the opening run just paces away from the plate. Instead, Hoover regrouped and got a strikeout to end the frame and stop the threat.

A.J. Andrews earned a walk to reach first to open the bottom of the second. Landry stepped up to the plate and put down a sacrifice bunt, but the throw went wide and allowed Andrews to come around and score and move Landry to third on the play to put LSU up 1-0. After a pop up in foul territory, Jaquish hit a ground-rule double to easily score Landry and make it 2-0 Tigers. After a fly out to deep center, Simmons connected for a double to left center to score the third baseman to put up three in the inning for LSU.

Notre Dame earned its first run, thanks in part to a leadoff home run from Arizmendi to make it 3-1, but nothing else crossed for the Irish in the inning.

The Irish strung together consecutive hits to cut the LSU lead to one, getting a single and a double to make it 3-2. Notre Dame earned another hit in the frame to put runners at the corners to put LSU in a tight spot. But consecutive grounders to Bell and a line out to Emily Griggs in left ended the inning.

The game began to turn for Notre Dame in the top of the sixth, where a single, fielder’s choice and bunt single loaded the bases for the Irish with no outs. By this point, Walljasper had come in to relieve Hoover, and with the bases loaded, earned a big strikeout to get the first out, and got the next batter to ground into the 5-2-3 double play to end the inning and keep the score intact.

A single to the first batter put one on for Hofstra, but a strikeout proved to be the first out. A single to third put two on, as a fielder’s choice loaded the bases to put LSU on the brink. On the next play, a grounder to Jaquish allowed her to throw out the lead runner at home. With everything on the line and a 2-2 count, Walljasper got the strikeout to end the game and give LSU the victory.

“I tried to relieve myself of all of the hectic things that were happening. Tried to focus on the catcher, the batter, and me the whole time,” Walljasper said. “By doing that I feel fine when I’m out there.”

For the second consecutive weekend, sophomore hurler Kelsee Selman tossed a shutout, allowing one hit in the game, while her offense produced eight runs on 11 hits to power the LSU softball team past the Hofstra Pride 8-0 in five innings in the final game of the night for team at the Tiger Invitational.

Selman (2-0) was nearly unhittable for the duration of her complete-game effort, giving up her first hit of the game after mowing down the 12 batters of the game before surrendering a single in the fifth, but was dominant still with eight strikeouts and one walk on just 69 pitches.

“It’s good just because last year I had so much trouble throwing balls,” Selman said. “Now it feels great just to go out there and play. It helps because I know my teammates are behind me. It’s not just one arm circle, it’s 20 others.”

After being held in check for much of the previous game, the Tigers (9-0) scored in droves and needed just two innings to do so, scoring five in the third and three in the fifth and final frame to pull ahead for good and bully past the Pride (1-3) Saturday evening.

“We are facing a pitcher that we saw yesterday so I think we were a little bit better playing against her,” Torina said. “We had a lot of at bats against her on the weekend so I think that helped,”

An error allowed Alayna Falcon to reach first, moving to second on a grounder by Sydney Bourg. Layna Savoie came on to pinch run in the spot, and the move worked as Landry hit a single and scored Savoie, moving to second with Andrews at third on the play. A rip by Bell through the infield scored both to make it 3-0 LSU.

With Bell at second after the double, an infield grounder kept her at bay, until a single by Kellsi Kloss to right center scored the shortstop to make it 4-0. With Kloss now at second, Simmons connected with a shot to right center to plate Kloss and put the Tigers up five.

Looking for a bit of insurance after putting up a bunch of runs early, Bell came through and took the first pitch she saw over the fence in center to give LSU a 6-0 lead. LSU wasn’t done as Kailey McCasland came on to pinch hit and got plunked to take first. Simmons hit a single deep in the infield to put two on, as after a strikeout, Falcon singled up the middle, scoring McCasland, with the overthrow from center allowing Simmons to score to make it 8-0 to close the game out.

LSU will close out the 2015 Tiger Invitational with another game against Notre Dame at 11:30 a.m. Sunday at Tiger Park.