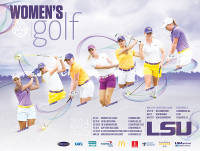 LSU enters the event ranked 20th in Golfstat and 16 in the latest Golfweek performance rankings.

The Lady Tigers finished on a strong note, capturing the final event of the fall season, the low-scoring Alamo Invitational in San Antonio. LSU posted a 23-under score of 841 to capture the championship after finishing second earlier in the fall in the Mason Rudolph Championships at the Vanderbilt Traditions Club.

The three-day, 54-hole event, which runs through Tuesday, is the first of four tournaments in the spring regular season schedule highlighted by the annual LSU Tiger Golf Classic March 27-29 at the University Club, site of one of  the 2016 NCAA Women’s Regional. LSU is looking to return to the NCAA Championships for the first time since the team’s back-to-back third place finishes in 2011 and 2012.

Three LSU players averaged under 72 in the 12 fall rounds and all three will be in the starting lineup for the opening event of the spring.

Junior Elise Bradley of Mandeville will look to continue what in the fall was one of the most improved seasons in college golf as she had two top 10s and no finish worse than T13 in averaging 71.25 for the 12 rounds with 10 rounds of par or under.

Sophomore Caroline Nistrup of Austria finished second at The Alamo posting a 54-hole total of 11-under par 205 and completed the fall at 71.75. Nistrup had two top 10 showings on her card for the fall.

Rounding out the strong Tiger lineup will be junior Nadine Dreher, a winner of the prestigious Wally Pontiff Award the other night at the annual LSU Academic Gala, and sophomore Carly Ray Goldstein. Dreher averaged 78.22 over nine rounds in the fall, while Goldstein posted a good 12-round average of 74.92. Local freshman Sydney Cavin will play in her third event of her college career in the individual competition of the tournament.

Nationally, LSU has three golfers in the top 50 in the Golfstat cup with Bradley at 28, Sagstrom at 36 and Nistrup at No. 47.

“We are extremely excited to get back on the competitive course and see how we stand starting the spring,” said LSU Coach Karen Bahnsen. “It is a journey, not just one tournament and we look forward to seeing how our games are here and then moving forward from here. We enjoyed our last visit here and hope to have more success over the next three days.”

LSU is making its first start in the Puerto Rico event since 2012, when it won the 54-hole event played over the same course.