No. 2 Gymnastics Fights for Victory at Auburn 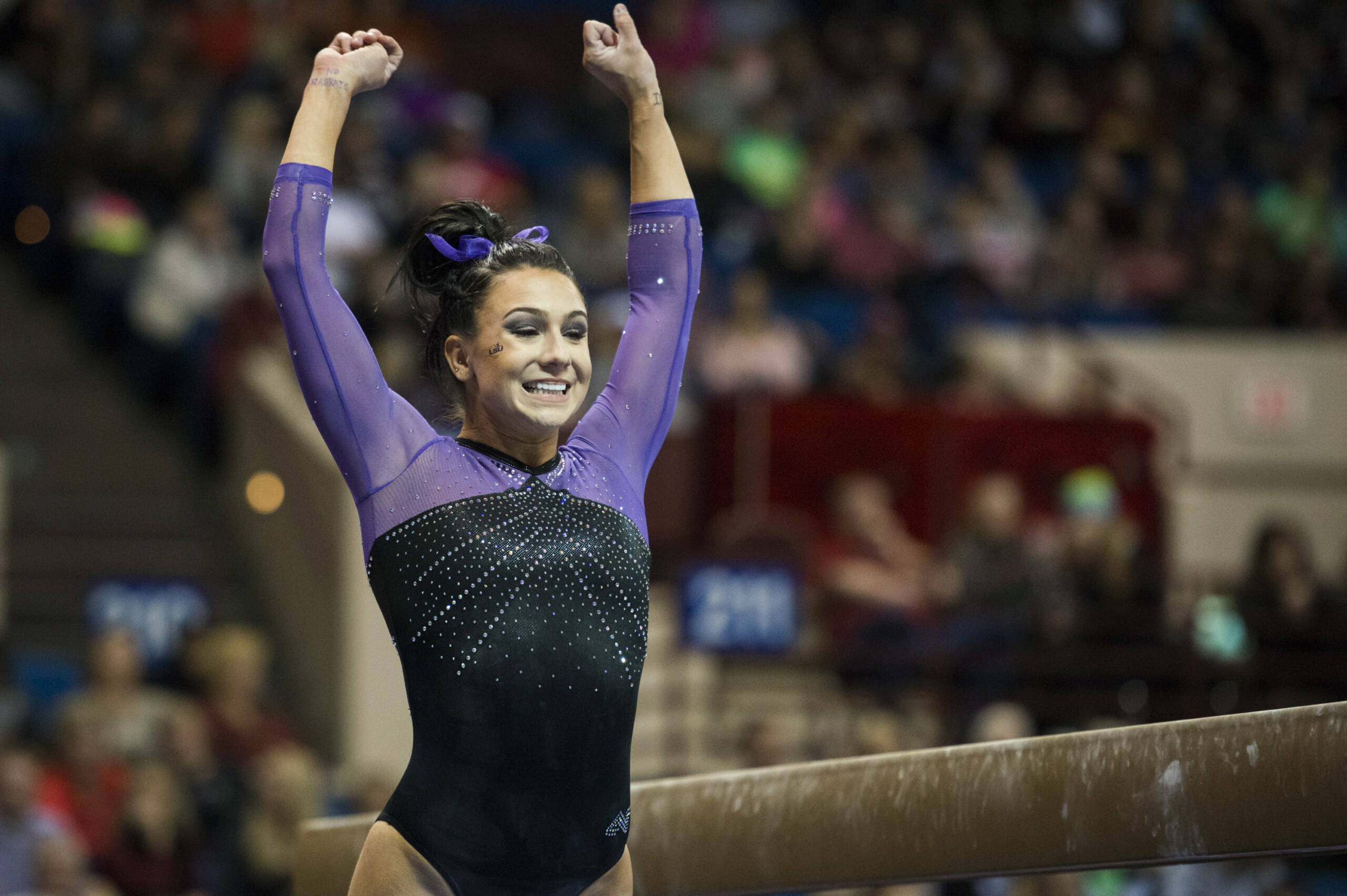 AUBURN, Ala. – It came down to the very end, and it was the second-ranked LSU gymnastics team who came away with the victory, 197.350-197.300, over No. 9 Auburn Friday night inside Auburn Arena.

Sophomore Ashleigh Gnat earned her first career all-around title with a career-high 39.550. Gnat also won the floor title with a 9.95.

Rheagan Courville moved into sole possession of second place for most vault titles in LSU history as she scored a 9.95 to clinch her 27th vault title. She also won the bars title with a 9.925, her sixth bars title of the season and the 16th of her career.

Jessie Jordan returned to the bars and beam lineups tonight after missing last week with an injury, and she captured the beam title with a 9.925 in LSU’s final performance of the meet. Her clutch routine boosted LSU to the team victory.

“We performed well enough to win tonight, but we still have things to clean up,” LSU head coach D-D Breaux said. “It was hard to gain momentum and a rhythm, and it felt like we could never get something going.

“We needed clutch performances tonight, and again our team came through. That’s something to hang our hat on as we move forward with another win.”

LSU opened the meet with a 49.250 on bars, highlighted by Courville’s 9.925 to win the title. After missing the meet last week with an injury, Jessie Jordan returned to the bars lineup and tallied a 9.85. Shae Zamardi added a 9.85, Randii Wyrick earned a 9.825 and Ashleigh Gnat and Jessica Savona recorded 9.80s to round out the scoring.

LSU trailed Auburn after one rotation, 49.500-49.250, with the Fighting Tigers of LSU headed for vault and Auburn moving to bars.

Courville won her sixth vault title in as many meets this season with a 9.95. Both Sydney Ewing and Myia Hambrick stuck their vault cold to earn career-high 9.925s. Gnat tied Ewing and Hambrick with a 9.925 of her own, and Lloimincia Hall posted a 9.85 to round out the scoring. In her first performance of the season after a return from injury, Britney Ranzy earned a 9.80 on vault.

The meet came down to the final performer in the end, and Jordan’s clutch 9.925 on beam not only gave her the event title but also gave LSU the victory. The Tigers wrapped up the meet with a 49.275 on beam, highlighted by Jordan’s 9.925. Erin Macadaeg and Gnat each tallied a 9.875, while Hambrick added a 9.825 and Ewing closed out the counting scores with a 9.775 from the leadoff spot.

LSU returns home to the Maravich Center next week when the Tigers play host to defending national co-champion and fourth-ranked Florida at 7:30 p.m. CT on Feb. 20. Tickets are available for purchase at www.LSUtix.net, and prices start at $5 for adults and $3 for youth ages 3-12.

“It’s going to be a great meet next week, so go online and get your reserved seats because you won’t want to miss this one,” Breaux said of the Florida meet.

For the latest information on LSU gymnastics, log on to www.LSUsports.net/gymnastics. Fans can also connect with LSU on the team’s social media accounts: www.Facebook.com/lsugym, @LSUgym on Instagram, Snapchat and Twitter, and www.YouTube.com/lsugymnastics.