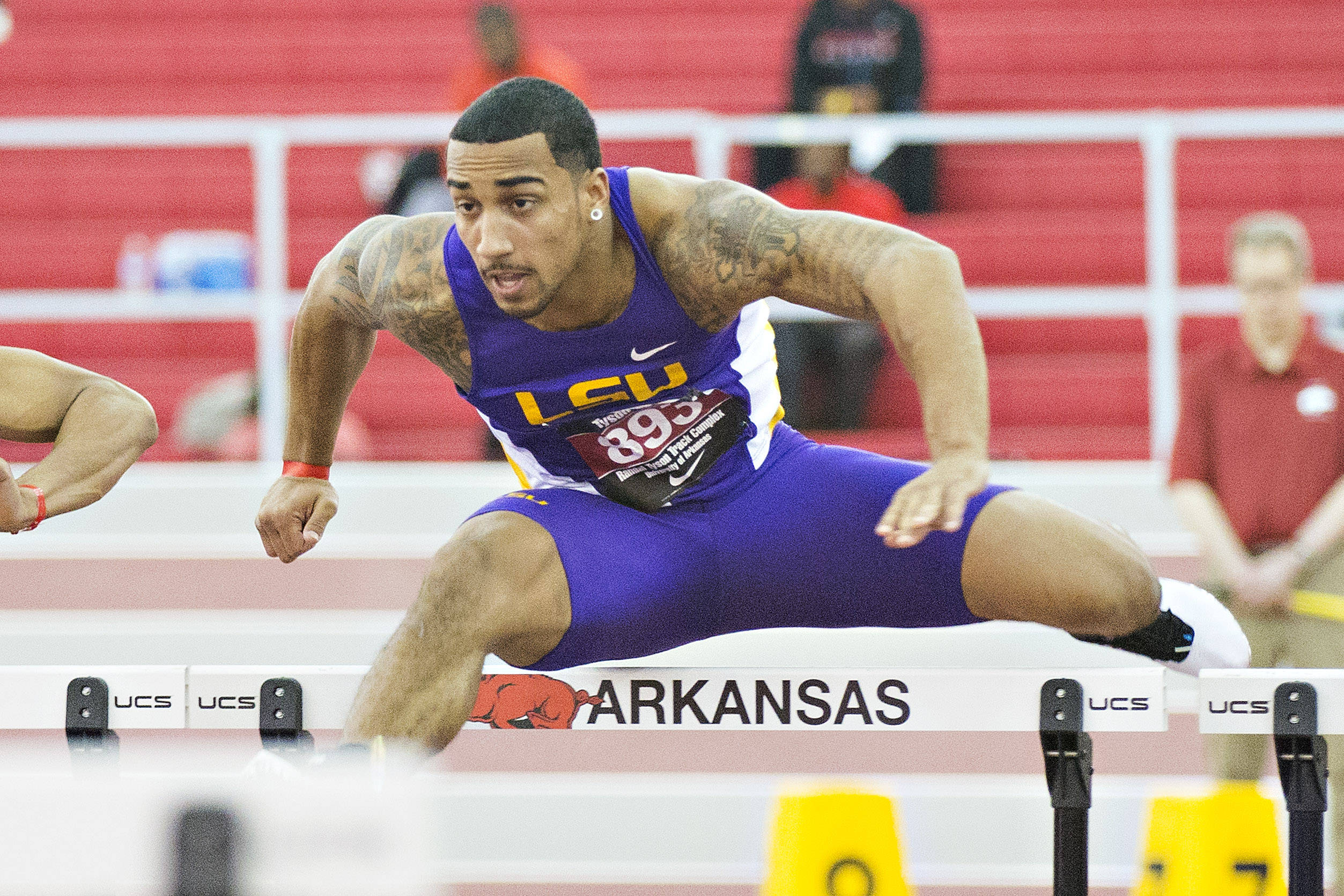 BATON ROUGE – Senior Joshua Thompson lined up in the qualifying round of the 60-meter hurdles with a top time of 7.84 seconds during his three seasons as an LSU Tiger, but emerged from Friday’s final as an All-America threat as he was crowned the Tyson Invitational champion with a personal best of 7.73 for one of the NCAA’s leading performances in 2015.

Thompson cracked the Top 5 of the NCAA rankings by tying for the fifth-fastest performance nationally this season, while also moving into the No. 4 spot on LSU’s all-time indoor performance list in the event.

Joined in the final by sophomore teammate Jordan Moore, Thompson fired out of the blocks and nipped Texas Tech’s Chris Caldwell (7.74) at the tape for a narrow victory to take home his third hurdle title in six meets this season. Thompson was also crowned champion in back-to-back meets to start the season at the LSU Indoor Invitational (7.94) and Auburn Indoor Invitational (7.90).

While edging Caldwell at the finish line, Thompson was also crowned champion ahead of South Carolina’s bronze medalist Jermaine Collier (7.76) in third place, Moore (7.86) in fourth place and Georgia’s Devon Williams (7.89) in fifth place to round out the Top 5 of the final hurdle standings. South Carolina’s duo of Jussi Kanervo (7.91) and Isaiah Moore (7.92) crossed the finish line in sixth place and seventh place, respectively.

Arkansas’ defending NCAA Champion Omar McLeod did not start the hurdle final after racing to a national-leading time of 7.60 as the top qualifier in the semifinal round earlier in the evening.

After opening with a run of 7.87 for the third-fastest time in the preliminary round, Thompson clocked back-to-back seasonal bests of 7.83 for the third-best time in the semifinal and 7.73 for a new personal best in the final to take home the prestigious title. He eclipsed his previous best as an LSU Tiger of 7.84 set as a junior a year ago, as well as his previous PR of 7.79 recorded as a freshman at the University of Pittsburgh in 2012.

“What a breakthrough for JT tonight,” said LSU head coach Dennis Shaver. “He’s come so close to having that kind of performance really throughout his time with us, but especially this season. Like so many athletes on our team, he’s been very consistent with his performances to this point of the season, but just needing to find that breakthrough to put himself in qualifying position for the NCAA Championships.

“He did that in a big way tonight. It’s great to get off to this kind of start here at Tyson. We’ll have another great opportunity to strengthen our squads when we come back to compete here tomorrow afternoon.”

Thompson’s victory highlighted Friday’s opening day of competition at the Tyson Invitational with LSU’s contingent of sprinters and hurdler on show this weekend at Arkansas’ Randal Tyson Track Center.

Also putting himself squarely into qualifying position for the NCAA Division I Indoor Track & Field Championships with a Top 16 performance nationally this season was junior All-American Darrell Bush, who slashed over a half second from his previous seasonal best of 47.11 in the 400-meter dash with a heat-winning time of 46.59 for sixth place overall in the men’s invitational final. That time moved Bush into a tie for the No. 14 place in the national rankings to emerge as one of the NCAA’s leading performers in the event.

With Bush running 46.59 for sixth place in the men’s invitational 400 meters, senior All-American Quincy Downing edged his teammate by two one-hundredths of a second with a time of 46.57 to win the second section and earn a fifth-place finish in the event. Texas A&M’s Deon Lendore (45.38) and Bralon Taplin (45.39) finished 1-2, followed by Texas’ Zack Bilderback (45.98) and Florida’s Nick Uruburu (46.33).

Senior Aaron Ernest just missed out on a spot in the final of the men’s 60-meter dash when he sprinted to the finish line in 6.67 to set a new seasonal best and personal best of his own. Like Thompson, Ernest shot into the Top 10 of LSU’s all-time indoor performance list by tying for the seventh-fastest sprinter in school history in the event.

Freshman sprinter Mikiah Brisco set the pace for the Lady Tigers on Day 1 at the Tyson Invitational when she earned a seventh-place finish in the final of the women’s 60-meter dash, clocking back-to-back times of 7.36 in the semifinal and final rounds. Sophomore Jada Martin finished in 12th place with a time of 7.43, while sophomore Rushell Harvey followed in 16th place overall with a time of 7.49 in the 60-meter semifinal.

In her last appearance at the Randal Tyson Track Center two weeks ago, Lady Tiger freshman Daeshon Gordon raced to a personal best of 8.30 in claiming her first collegiate title in the women’s 60-meter hurdles at the Razorback Invitational. On Friday, she followed a run of 8.31 in the qualifying round by matching her PR of 8.30 for a ninth-place finish in the semifinal round while falling just short of a spot in the final.

Also setting an indoor personal best with her performance during Friday’s opener in Arkansas was sophomore Travia Jones, who clocked 55.07 for 19th place in the college division of the women’s 400-meter dash.

While entering the meet with a seasonal best of 20 feet, 5 ¾ inches in the long jump, sophomore Nataliyah Friar opened with a series-best of 20-4 ½ on her very first attempt to lock up fifth place in the invitational final behind Kansas State’s Akela Jones (21-9 ½), unattached athlete Bianca Stuart (21-8 ¾), Kentucky’s Sha’Keela Saunders (21-3 ½) and Arkansas’ Tamara Myers (20-9 ¼).

With LSU’s sprinters and hurdlers lighting up the track at the Tyson Invitational, the team’s middle distance and distance runners took to the 300-meter oversized track at the Lied Recreational Center in Ames, Iowa, on Friday night looking to improve their bests at the Iowa State Classic also running this weekend.

The Lady Tigers did just that when they nearly set a school record in the distance medley relay as the team of junior Andria Aguilar (1,200 meters), freshman Keterra Harris (400 meters), sophomore Danielle Avery (800 meters) and sophomore Morgan Schuetz (mile) carried the stick around the track in 11 minutes, 19.10 seconds to score the silver medal with a runner-up finish to Baylor (11:11.28) in the women’s relay.

It was a performance that moved the Lady Tigers into the No. 11 spot in the NCAA rankings for 2015, while also finishing just a split-second shy of LSU’s school record of 11:18.75 set three seasons ago in 2012.

Senior Philip Primeaux followed the Lady Tigers’ runner-up finish in the distance medley relay by smashing his indoor personal best in the 5,000 meters by more than 18 seconds with a run of 14:36.26 to finish 23rd place in the men’s championship final to wrap up the day’s events. Primeaux came up just two seconds shy of cracking LSU’s all-time Top 10 list with his performance on Friday night.

“We split up the teams this week to give our distance group a better opportunity to compete against a strong field at Iowa State this weekend,” Shaver said. “They had a great first day and I know that Coach (Khadevis) Robinson will be looking for even more from his athletes when they line up again tomorrow. They will need to be ready to go from the start as they get going bright and early tomorrow morning.”

The action at both the Tyson Invitational and Iowa State Classic continues Saturday as the Tigers and Lady Tigers look to finish strong following another outstanding weekend of competition. LSU’s teams will take to the track at the Lied Recreational Center for the first time at 9:30 a.m. CT, while the action continues at the Randal Tyson Track Center at noon in the field events followed by the first events on the track at 12:50 p.m.

SEC Network+ will feature live coverage of Saturday’s action at the Tyson Invitational as fans can watch the Tigers and Lady Tigers in action beginning at noon CT by logging on to http://ESPN3.com or using a WatchESPN app. Coverage will continue through the running of the 4×400-meter relays at approximately 5 p.m.

With the Tyson Invitational and Iowa State Classic already underway, fans are invited to come out to the Carl Maddox Field House in Baton Rouge on Saturday and see the Tigers and Lady Tigers in action at the LSU High Performance Meet that is set to begin at 10 a.m. CT with the first field events of the day followed by the first preliminary races on the track at noon.

Fans can also receive live updates of the Tigers and Lady Tigers competing in Arkansas, Iowa and right here in Baton Rouge by following the team on social media. Fans are invited to follow @LSUTrackField on Twitter at http://twitter.com/lsutrackfield and Instagram at http://instagram.com/lsutrackfield, while also liking LSU Track & Field on Facebook at http://facebook.com/lsutrackfield.