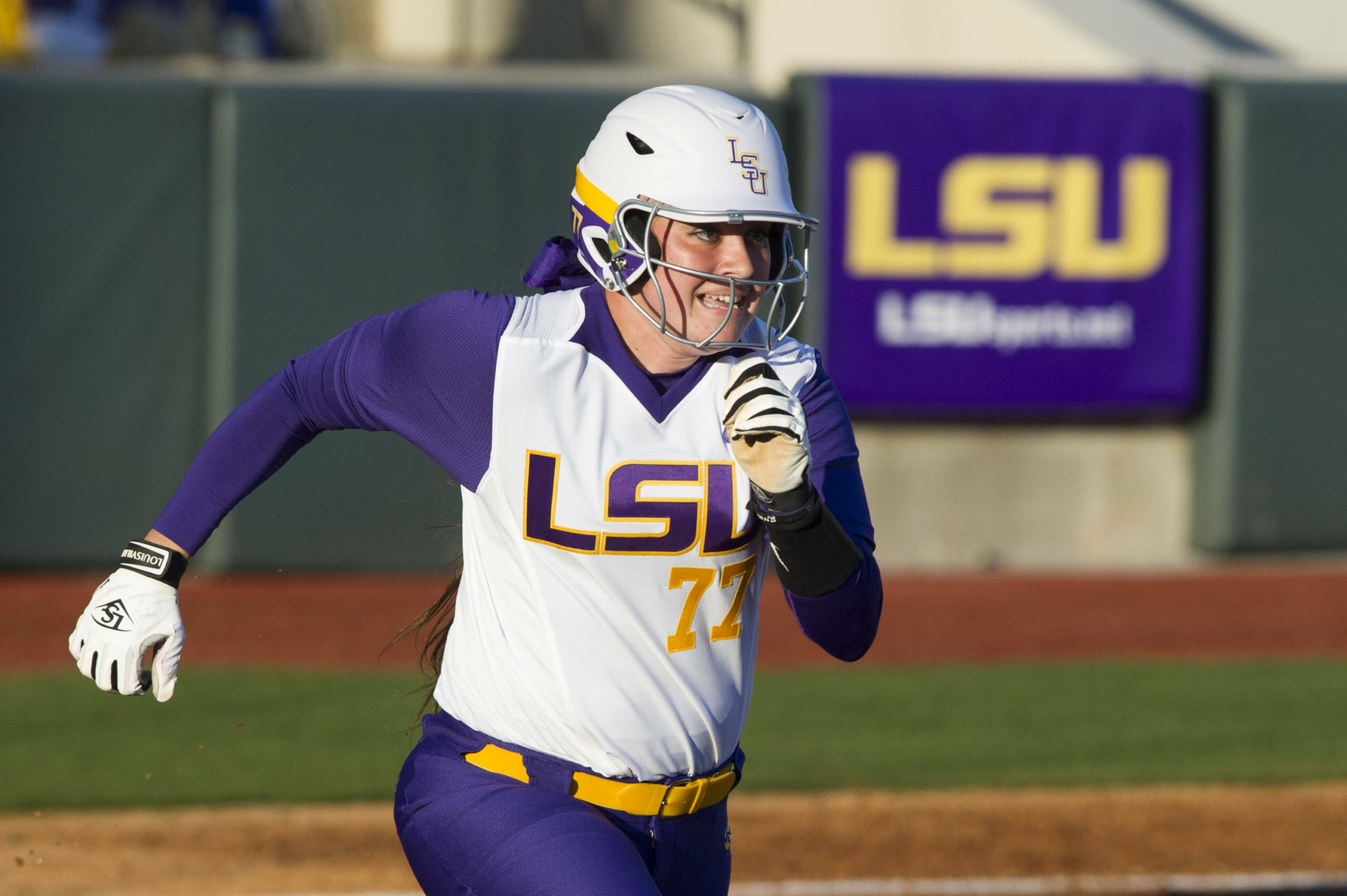 BATON ROUGE, La. – After earning just four hits in the first game of the day, the No. 16 LSU softball team came back to pound out eight runs on 12 hits, including four home runs with an inside-the-park, walk-off game-winner from the bat of Kailey McCasland to defeat the Central Arkansas Bears 8-0 in a clean sweep of Friday action on the opening day of the 2015 Tiger Invitational.

LSU (7-0), looked to be set with its four-run lead heading into the waning moments late in the contest, but instead exploded for four runs on three hits, including sophomore Sahvanna Jaquish‘s second three-run home run of the game to put the Tigers on the brink of the win, with McCasland coming on to pinch hit and seal it with her shot to the gap in right, the first inside-the-park home run since Shannon Stein in 2008.

“It’s so nice for her because she has done so many things right, and she has been a wonderful person for this program the last four years,” head coach Beth Torina said. “This is the reason I do this job and something like that happens to a person like Kailey it makes this all worth it.”

Seven different LSU players earned hits on the night, with three earning multiple behind Jaquish and her 3-for-4 afternoon with six RBI, stolen base and two runs scored. The Highland, California, native is the first player since Kellsi Kloss in 2013 to account for that many RBI in a game, while repeating her own feat of being the last player to hit two home runs in a game since the Florida series last year.

“It was a getting overwhelming because I had such a bad first game I had not eased myself into the celebration,” Jaquish said. “But after I hit the second one I thought ‘this is how I hit’ and this is usually how I see the ball, and I was really happy and my teammates kept helping me with my confidence. They kept telling me to keep swinging and of course they were right.”

Kloss hit her first home run of the year and went 3-for-3 with an RBI and run scored, while Bailey Landry went 2-for-4 with two runs scored. Emily Griggs went 1-for-2 with two walks and a stolen base, while Bianka Bell went 1-for-4 with a run scored.

While the offense had a field day at the plate, starting pitcher Baylee Corbello went the distance and earned her third win of the season, having a no-hitter through 4.2 innings before eventually earning the one-hit shutout to go along with her five strikeouts on the evening.

LSU wasted little time in getting the scoring started, as with one out in the bottom of the first Landry singled up the middle to take first. Bell followed suit with a shot up the middle, as everyone would get to trot home easy as Jaquish blasted a 2-1 pitch clear over the fence to the berm for the three-run shot to put LSU up 3-0.

Jaquish earned her second hit of the day with one out in the bottom of the third, promptly stealing second to get into scoring position. Kloss singled up the middle to put runners at the corners, with a walk to Sandra Simmons loading the bags for the Tigers. Unfortunately, a strikeout and pop up in foul territory ended the threat with the bases loaded.

UCA eventually broke through in the top of the fourth, as consecutive walks put two runners on for the Bears, but with a strikeout to open the frame, an infield pop up to Dylan Supak at second put two outs on the board. Another walk loaded the bases to put the pressure on the Tigers, but Corbello came through with a strikeout to end the inning.

“It felt good and I was definitely getting the right pitch calls I just was not hitting the pitches,” Corbello said. “I tried to hit more around batters tonight then trusting on my preparation.”

LSU came back in the bottom half of the inning with Griggs earning a leadoff infield single. A.J. Andrews followed up with a bunt single to put two on with no outs. An illegal pitch advanced the runners to second and third, but a liner to third, grounder to the pitcher and grounder to short ended the inning with two left in scoring position.

Kellsi Kloss led off the bottom of the fifth on the second pitch with a moonshot, clearing the fence for the solo shot to make it 4-0 Tigers.

Griggs drew a walk to take first, with Andrews flying out to right for the first out. Landry connected for a single to put two on with just one out. After a deep fly ball to right advanced the two to second and third, Jaquish pounced on a 3-2 pitch for her second bomb and third hit of the day to make it 7-0. McCasland came on after that, roping a low shot past the infield gloves and rolling towards the deep corner in right. Torina gave the senior the green light and she raced around third and in before the tag to score and end the game giving the Tigers the win.

“I definitely was not planning on doing that, I was just trying to get on base,” McCasland said. “It was my first at bat of the season and I was not looking to get a home run in that way.  I had been studying the pitcher the entire game and I knew what I wanted to hit and when I got that on the second pitch, I just hit it into right field.”

Junior infielder Bianka Bell hit her fourth home run of the season to kick start the LSU scoring and freshman Allie Walljasper twirled her second consecutive complete-game shutout as the Tigers defeated the Hofstra Pride 3-0 in the team’s first game of the day at the Tiger Invitational Friday afternoon.

Bell accounted for two of LSU’s four hits in the contest, going 2-for-3 with two RBI and a run scored, with Kellsi Kloss earning a hit and run scored with Sandra Simmons providing the other. The other run on the day was an RBI groundout by Constance Quinn.

Walljasper (2-0) retired the first 11 batters in order before giving up her first hit of the contest, finishing the day scattering three while striking out five with no walks on just 71 pitches. The freshman retired the side in four of the seven innings on the night, only giving up a single hit in three consecutive innings.

“Alli was very impressive and the game only took 1 hour and 22 minutes total, and I think that is due to her throwing strikes and quality pitches,” Torina said.

Hofstra’s (0-2) Taylor Pirone suffered her first loss of the season for the Pride, as the three combined runs in the third and fourth innings did in the senior in the circle. Pirone struck out three and walked two, stifling LSU hitting early before struggling late.

Kloss was the first player to reach base for either side, taking first after an error at third base. She stole second to get into scoring position, with Simmons earning a walk to put two on with one out. After a fly ball out to deep center for the second out, LSU was looking to break through, but a pop up in foul territory ended the inning.

After a strikeout and groundout to open the LSU third inning, Bailey Landry drew a walk on four straight balls to reach first. The easy trot to first would pale in comparison to the one she would make around the bases, as Bell took one pitch and wouldn’t need another as she drilled one to the berm to give the Tigers a 2-0 lead.

Kloss opened the bottom of the fourth with a single to right to take first. Simmons came through with bunt single to put two on for the Tigers with no outs. After a grounder to advance the runners to second and third, Quinn earned the RBI on a groundout to score Kloss to make it 3-0 LSU.

LSU will be back in action on Saturday afternoon beginning with a game Notre Dame at 3 p.m. at Tiger Park.