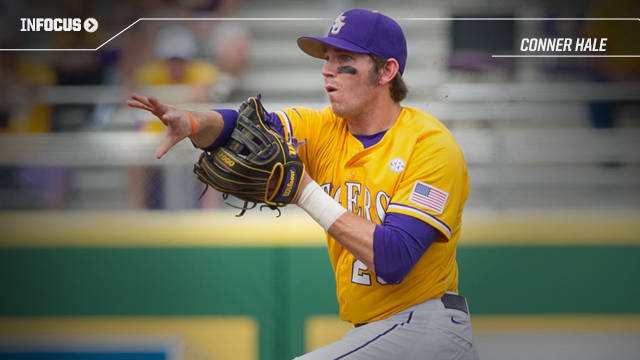 Going to a Division I school out of high school is not an option for some baseball players. The reasons can range from roster limits to simply not being ready. 2013 was the year of the transfers as Sean McMullen and Christian Ibarra made an immediate impact in helping lead the Tigers to Omaha.

There’s something different about the players who take the junior college route. Every day is a new opportunity to get better individually and for the team. For Connor Hale, going to a junior college was what made him a better player.

“Going to junior college allowed me to get bigger and stronger,” Hale said. “It definitely helped me develop because it’s a huge adjustment going from high school to college. I was able to get better and handle coming to LSU a lot better.”

The New Port Richey, Florida, native played at J.W. Mitchell High School and eventually moved on to the State College of Florida. Hale hit .366 and was named the Conference Player of the Year during his final season at State College.

Hale came to Baton Rouge and made an immediate impact for the Tigers starting 55 games between first and second base. There were many questions going into the season about the right side of the infield, but Hale showed maturity with only four errors and a .988 fielding percentage.

“I had never played first base until I got here so it was an adjustment,” Hale said. “Not only did I have to adjust to DI baseball, but I also had to adjust to playing a new position. (Former LSU infielder and current assistant coach) Christian Ibarra really helped me out with the transition, though, and now I feel comfortable at both positions.”

Playing Division I baseball is enough of an adjustment but Hale proved his worth on the field and in the lineup. He had the third-highest batting average on the team and provided crucial hits for the Tigers in the lineup, batting anywhere from the third hole to the ninth spot.

One of the senior’s biggest nights came in Game 1 of the Top 10 matchup last season with Ole Miss. The atmosphere of Swayze Field didn’t intimidate Hale as he went 3-for-5 and scored the game-winning run.

“Going to Ole Miss was an awesome time and I love playing in front of an environment like that,” Hale said. “It was great to grab that first win and that’s what set the tone for the series.”

Hale started postseason play by being named to the SEC All-Tournament team, hitting .375 as the Tigers won the tournament title. In the first game of the tournament against Vanderbilt, he was 3-for-4 with two doubles and he scored two runs.

Hale is in yet another position battle this season between first and second base. LSU coach Paul Mainieri will look to him for sound defense and spark in the lineup, much like last season. His versatility in the infield may even give him an option to play third base this season.

“We have a veteran infield and a guy like Conner Hale gives confidence to our freshman pitchers,” Mainieri said. “He has only been here for a year but having three years of college experience under his belt helps us.”

Winning the SEC Tournament last season has inspired Hale going into his final year at LSU, but there are still more things that he would like to accomplish while a Tiger.

“Winning the SEC tournament was awesome last season and it makes me want to work hard to win it again,” Hale said. “Our goal here at LSU, though, is to make it to Omaha and win a national championship. I’m going to do whatever I can to help this team achieve our goals.”