Tickets on Sale for Baseball Tournament in Houston 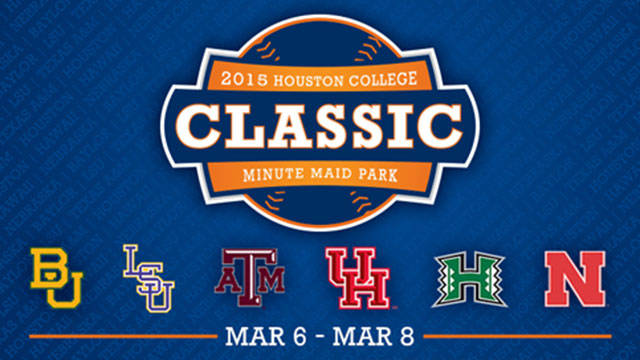 The Houston College Classic once again boasts a strong lineup led by No. 2 LSU and No. 3 Houston, as ranked by Baseball America in their preseason poll. This marks the first time in tournament history that it will host two of the top three teams in the country. This event is regarded as one of the top collegiate baseball tournaments in the nation, as it continues to draw fans, top-ranked programs and scouts from every Major League organization on a yearly basis.

For local fans or alumni, this year’s tournament represents the only time that Hawaii, LSU and Nebraska will play in the state of Texas this season, while the Houston College Classic will be the only stop in Houston for Baylor and Texas A&M in 2015.

“The Astros are extremely proud to host the Houston College Classic,” said Houston Astros President Reid Ryan. “It’s one of the best preseason college baseball tournaments in the country and represents a great kickoff to our 2015 season.”

Select student and adult daily tickets and three-day tournament passes are now available for purchase online at www.Astros.com/CollegeClassic. Tickets can also be purchased at the Minute Maid Park Box Office (during regular business hours), by calling Ticketmaster at 1-877-9ASTROS, or by visiting any of the Astros regular Houston-area Ticketmaster outlets.