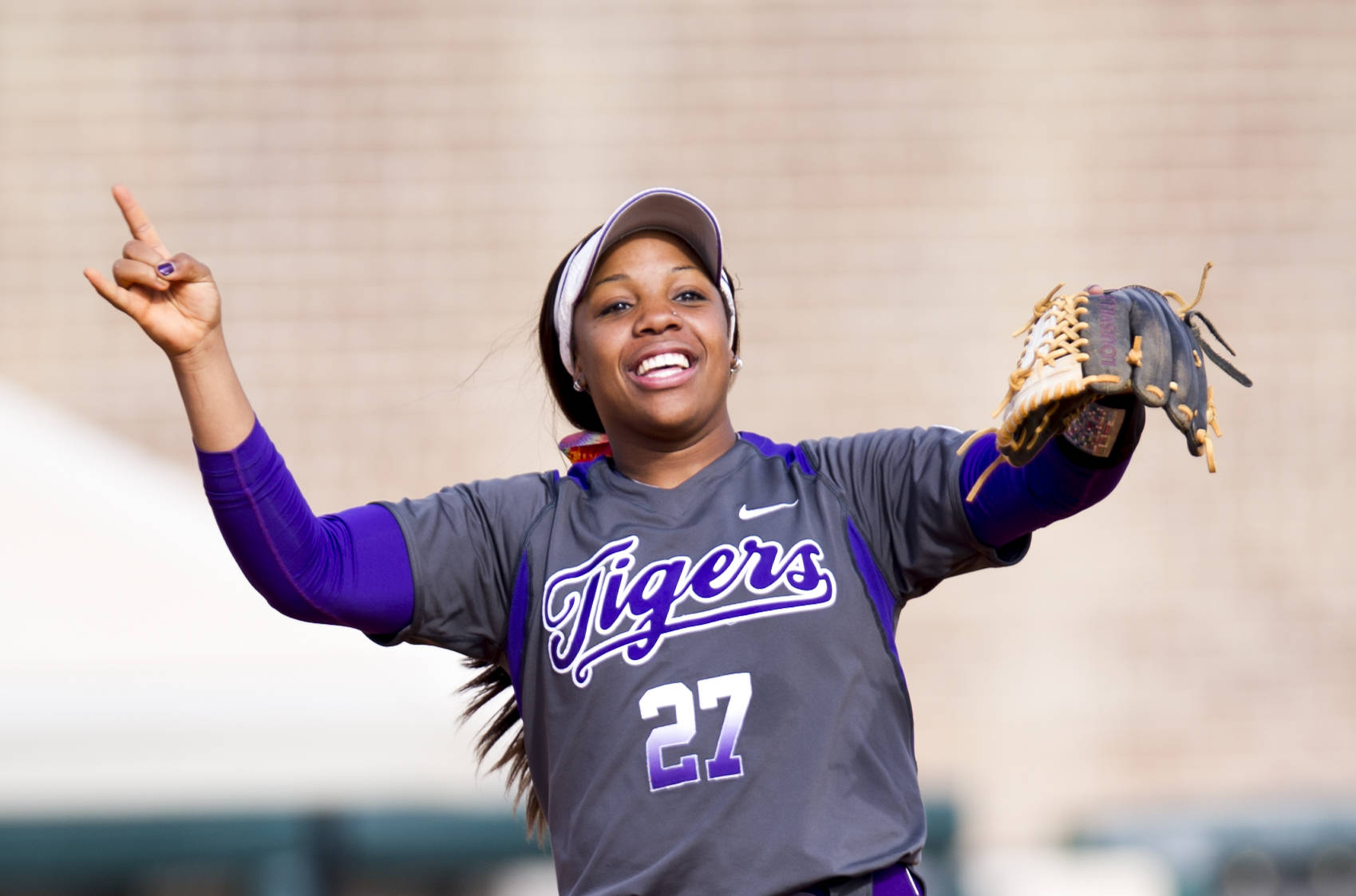 BATON ROUGE, La. – Looking to put a cap on a spotless weekend, the LSU offense put up crooked numbers in the first two innings, while the duo of starting pitcher Baylee Corbello and reliever Carley Hoover combined for nine strikeouts in seven innings to close the 2015 Tiger Classic with a 4-2 win over the NC State Wolfpack Sunday afternoon at Tiger Park.

After producing an onslaught of runs over the course of Friday and Saturday, LSU (5-0) earned the win the old-fashioned way on Sunday, scoring early and often and grinding out a big win to stay undefeated on the season.

“I think it’s a great start,” head coach Beth Torina said. “We saw a lot of good things out of our team. We saw a lot of things we still need to work on. So, we have to make sure we get after it and have a good week of practice, so we can keep getting better.”

Six different LSU players contributed a hit in the ballgame, led by Bianka Bell who crushed her third home run of the weekend to go 1-for-3 with two RBI and a run scored. A.J. Andrews and Emily Griggs had the other two RBI, as Constance Quinn, Kellsi Kloss and Bailey Landry produced the others.

“It’s a really good feeling,” Bell said. “I know that I still have a lot to work on. I’m going to go really hard this week at practice, so hopefully, it comes around this coming weekend.”

Making her second start of the weekend, Baylee Corbello (2-0) secured the win by pitching four innings of work and only giving up two runs on four hits with four strikeouts to just two walks. After giving up a solo home run in the opening inning, the Lake Charles, Louisiana, native settled down and was able to work out of some tight spots, giving way to Hoover who earned her first collegiate save by coming on in the fifth and gave up a hit before striking out five of next nine and retiring them in order.

Lana Van Dyken had two of NC State’s (2-3) five hits on the afternoon, as four were produced by the first four batters in the Wolfpack order. Emily Weiman (1-2) went the distance in the loss, striking out three and walking two on 101 pitches thrown in the game for NC State.

The Wolfpack struck first, as with one out Van Dyken hit a shot to left center that Andrews seemed to have a lock on, but continued to sail and landed on the berm for the solo home run to make it 1-0 for the visitors. Although they got another hit, Corbello got consecutive strikeouts to end the frame.

Andrews led off the bottom of the first by drawing a walk, but a fielder’s choice by Landry forced out the senior at second for the first out. Still, the big swing came from a familiar bat, as Bell crushed a 2-1 pitch and launched it out of the park to put LSU on top 2-1.

After two ground outs in the bottom of the very next inning, Quinn looped a single over the head of the second baseman to reach first. During a long at-bat for Griggs, Quinn was able to steal second and it proved crucial because on the next play the freshman came through with a single through the middle to drive in the sophomore and make it a 3-1 LSU advantage.

The two-out rally continued as Griggs stole second, and like clockwork, the Tigers got another big hit as Andrews smoked one through the right side to score the left fielder to make it 4-1. Landry followed that up with a single to right to put runners at the corners for the fourth hit of the frame, but a grounder back to the pitcher ended the inning.

After a pair of no-out hits to put runners at the corners for NC State, the Tigers turned a 4-6-3 double play to put two outs on the board, with the runner from third scoring to cut the deficit to just two. But a groundout on the next play ended the inning for LSU still on top.

NCSU struck again in the third, the only run for that entire inning, after scoring a run on a double play, but a ground out to Quinn at second to end the top half of the inning cut LSU’s lead now to 4-2. It was the final time the Wolfpack had any runner reach second base for the rest of the game.

“That’s the advantage of having four pitchers,” Corbello said. “Most good teams start hitting around the fifth inning anyway. It’s great to have someone come in and close out.”

LSU will be back in action next weekend, hosting the 2015 Tiger Invitational hosting Central Arkansas, Hofstra and Notre Dame