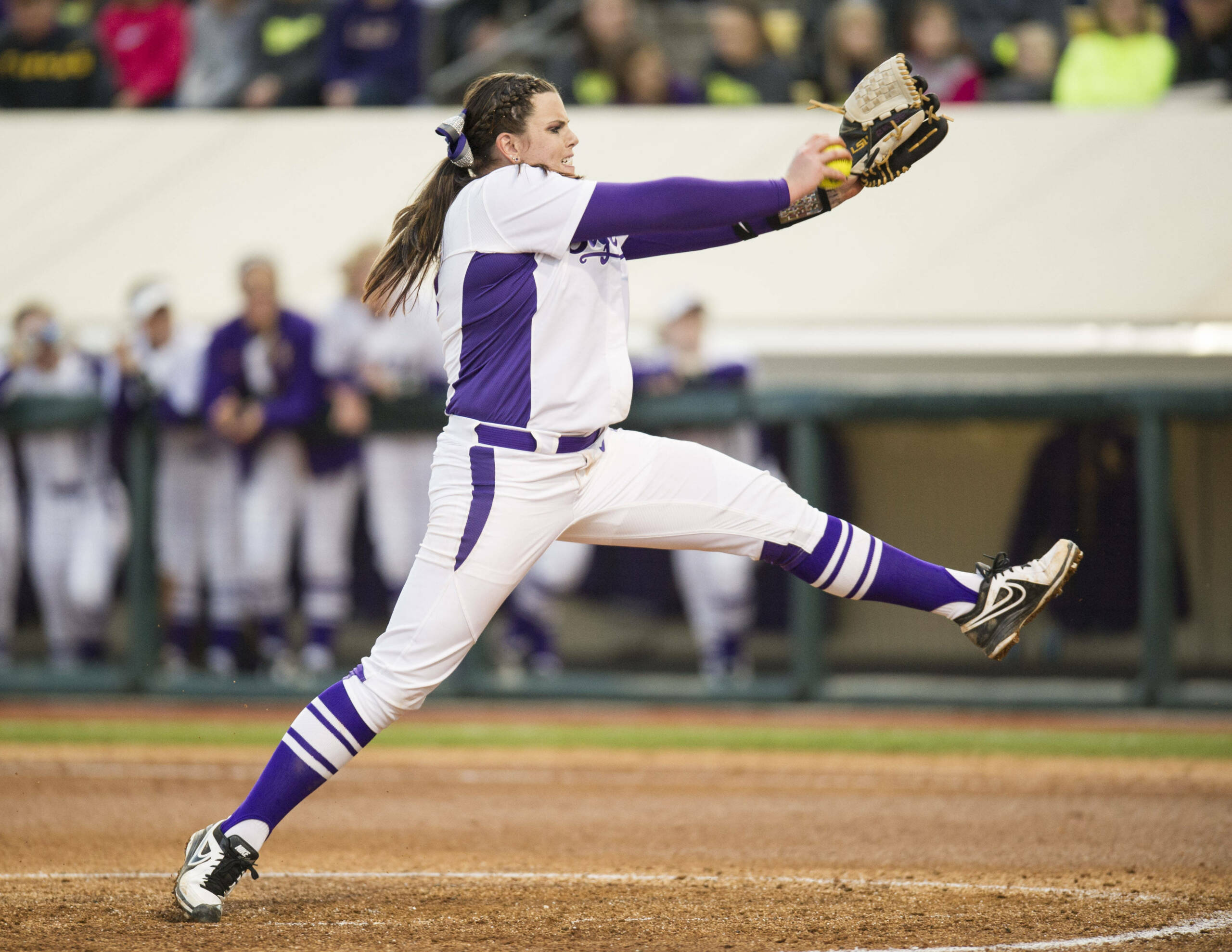 BATON ROUGE, La. – LSU freshman pitcher Allie Walljasper threw 4.1 innings of perfect ball and got help in the form of seven runs on ten hits as LSU closed out day two of the Tiger Classic on Saturday with a 7-0 win over NC State Saturday at Tiger Park.

Behind the second great pitching performance of the day and another for the weekend so far, the Tigers (4-0) produced another double-digit hit effort by scoring in four of the seven innings on the evening to pull past the Wolfpack (2-2) heading into Sunday’s final contest of the tournament. Saturday saw LSU combine for 17 runs on 22 hits, while holding their opponents to six hits total for the day.

“They have been swinging great, and they have been swinging great all preseason,” head coach Beth Torina said. “I would be interested to know if there is another team in the country that has four pitchers who have thrown four complete games and is 4-0 or have even used four pitchers to the extent we have. It is an amazing blessing we have right now with these four arms.”

In her first start, Walljasper retired the first 13 batters she faced in a row in leading to a complete-game shutout by giving up four hits with seven strikeouts and one walk. She helped her own cause by hitting her first collegiate home run in the second inning to kick start the Tiger scoring, finishing 1-for-3 with an RBI and run scored.

“It was awesome,” Walljasper said. “My mentality was just to come out here and hit my spots and be able to play on the field the way I wanted to.”

Bianka Bell and Kellsi Kloss gave NC State pitching fits on the night, going a combined 6-for-8 with four RBI and three runs scored. Bell produced her second home run of the season, while Kloss earned her first double among her three hits. A.J. Andrews went 2-for-4 with a double and two runs scored, while Bailey Landry was 1-for-2 with an RBI and run scored.

“Bianka is a special player. We have known that since the day she stepped on campus,” Torina said. “I think she just had to convince herself of that. She has shown what she is capable of, and she has done a great job.”

For the second consecutive game, LSU did little to help the opposition get any momentum, committing no errors while the Wolfpack had two. Courtney Mirabella (1-1) took the loss after giving up seven runs, five earned, on 10 hits with six strikeouts and two walks.

After a quiet first, Walljasper took the second pitch of her at bat in the second and hit a sky-high shot down the left field line, clearing the fence for the bomb to give LSU a 1-0 lead just five batters in.

“When she hit that homerun I was like ‘wow we have ourselves a great player,’” Torina said. “No matter what happened during that game, I could see the future in her and what she is going to become and what she already is. We have a great player on our team.”

In the third, Andrews hit a towering shot to left which was misplayed in the field and allowed the senior to motor all the way to third on the miscue. On the very next play, Landry hit a low shot on the ground up the middle to score Andrews for the 2-0 lead, but that was just the tip of the iceberg as Bell went deep into the count before hitting a no-doubter to the berm for the two-run shot to make it 4-0 Tigers.

“It felt good. I just stayed relaxed in the box like I’ve been doing and tried not to do too much,” Bell said. “I just wanted to stay within the plan and stay focused.”

Walljasper’s hot streak in terms of sitting down batters came to an end in the top of the fifth inning, as after a line-drive out, a walk then tough infield single put two runners on base for the first time all game for the Wolfpack. A fielder’s choice put runners at the corners to put some heat on the freshman, but she got out of the jam and closed the door with a strikeout to end the inning.

Bell led off the bottom of the fifth with a single up the middle to take first. After a foul out, Kloss singled to left to put runners on with just one out, with another fly-ball out proving to be the second of the inning for the group. In her at-bat, Walljasper hit a chopper to short that was misplayed for the error, as Bell was able to come around for the score to put LSU up five.

With one out in the sixth, Andrews laced a double to the left field fence to cruise into scoring position, moving to third on a sacrifice bunt by Landry. Down in the count, Bell ripped one through the right side for the double to score Andrews and make it 6-0. A walk to Jaquish put two back on, as Kloss put another insurance run on the board with a single to center, scoring Bell to make it 7-0.

Although she had an offense that exploded for 10 runs on 11 hits during the afternoon, sophomore starting pitcher Kelsee Selman pitched like everything was on the line as she used just 49 throws to hold the visiting Tennessee State Tigers to just two hits in a five-inning, 10-0 win Saturday afternoon in the team’s first game on Saturday at the Tiger Classic.

“It is going to play out so well for us this season to be able to rely on so many different people,” Torina said. “Both performances today were outstanding. I am excited all four of them have went the distance, and I’m excited to see all four of them work as a staff this season.”

10 of the squad’s 11 hits against Tennessee State (0-4) came in just two innings, also where the bulk of the Tigers’ scoring output came from, scoring seven in the opening frame and three in the fourth.

TSU didn’t have a runner get past second, including having a runner thrown out trying to steal, as Selman’s season debut was sensational in capturing the complete-game effort by striking out seven with no walks and facing just 16 batters in the contest.

A. J. Andrews drew a leadoff walk to open the Tiger first, stealing second and advancing to third on a grounder for the first out. Bell hit a line-drive single to center for the game’s first run to give LSU the lead. Jaquish followed suit with a single up the middle to put two on for the Tigers, as the two moved a base due to an illegal pitch, as Kellsi Kloss blooped a single to left to score Bell to make it 2-0.

On the first pitch of her at-bat, Simmons hit a laser through the right side of the infield to score Jaquish and advance Kloss to second to make it 3-0 LSU with just one out still on the board. A fielding error loaded the bases for LSU, as Supak connected for a drive down the left field line to score two to make it 5-0 Tigers. Griggs hit a hard single back to the pitcher to score Constance Quinn to make it 6-0, as Supak scored on a throwing error to make it 7-0.

With a sizeable lead already in the game, LSU took to the bottom of the fourth and got some momentum going again, with Bell doubling down the left field line to take second. Jaquish earned a walk to put two on, as a foul out allowed Bell to tag up and move to third with runners at the corners. Simmons came through with a single down the line on the left side to drive in bell and make it 8-0.

After a pitching change and a strikeout, Supak connected on a screamer down the line on the left side to drive, scoring Jaquish and Simmons to get the lead to double-digits at 10-0. Griggs singled in the infield and stole second, but remained on base with the inning ending on a pop fly.

LSU will close out the 2015 Tiger Classic on Sunday at noon with a game against NC State.