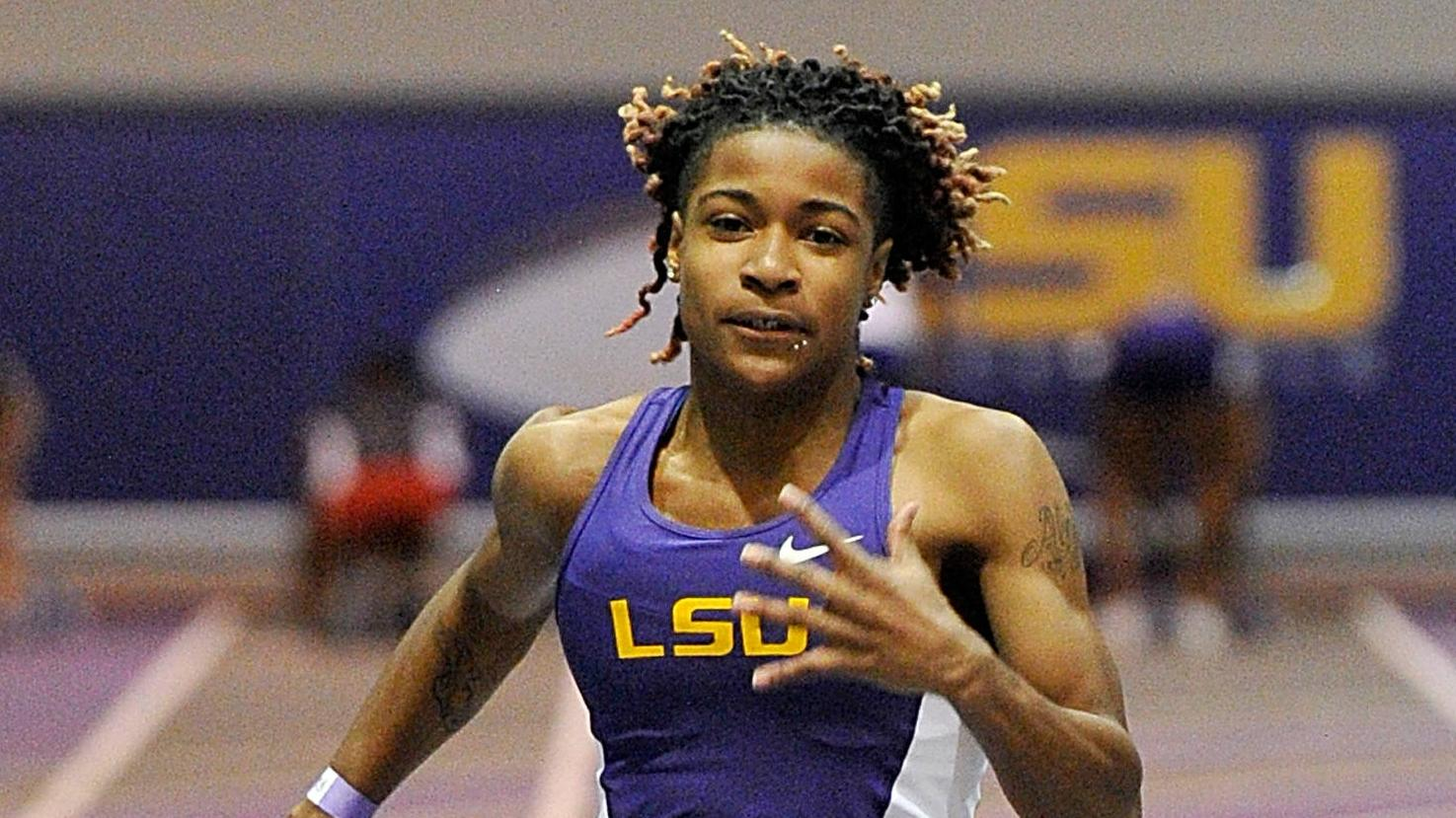 ALBUQUERQUE, N.M. – Tiger sophomores Tremayne Acy and Jordan Moore and Lady Tiger freshman Aleia Hobbs took one step closer to earning their spot in the field for the 2015 NCAA Division I Indoor Track & Field Championships by cracking the Top 16 nationally in their respective events during Saturday’s finale at the New Mexico Collegiate Classic.

Their performance capped an impressive weekend for the Tigers and Lady Tigers at the Albuquerque Convention Center as they followed an NCAA-leading time by senior Aaron Ernest in winning the men’s 200 meters and a national Top 16 performance by senior Rodney Brown in winning the men’s weight throw on Friday night. Two Lady Tiger sophomores were also won event titles during Friday’s action with Nataliyah Friar winning the women’s long jump and Ka’Lynn Jupiter claiming the unseeded division of the women’s 400 meters.

In all, the Tigers and Lady Tigers came away with five NCAA Top 16s, three LSU all-time Top 10s, 14 indoor personal bests and four events wins in two days of competition at the Albuquerque Convention Center.

“We’re very pleased with what we were able to get done as a team here this weekend,” said LSU head coach Dennis Shaver. “We came here to Albuquerque with some things in mind that we wanted to get done, and I think both teams did a pretty good job of that over the two days. There is still a lot of work to be done, so we look forward to another opportunity to compete next weekend.”

Acy etched his name in the LSU record books with a silver-medal-winning runner-up finish in the men’s 60-meter final, clocking back-to-back personal bests to finish on the cusp of the NCAA’s Top 10 in the event.

After winning the first of two preliminary heats with a run of 6.66, Acy dropped his personal best yet again with a sprint to the finish line in 6.63 to finish just a split-second shy of the winning run of 6.62 by Texas’ Senoj-Jay Givens in the final. With Acy’s time adjusted to 6.65 due to altitude, he became the fourth-fastest Tiger in program history and tied as the NCAA’s No. 11-ranked sprinter for 2015.

Also lining up alongside Acy in the final of the men’s 60-meter dash was Ernest, who followed his national-leading run in the 200 meters on Friday night with a seasonal best in the 60 meters on Saturday afternoon with a time of 6.68 to take home the bronze medal in a third-place finish. Ernest finished just one one-hundredth of a second off his personal best in the event with an altitude-adjusted time of 6.70 in the final.

While Acy set the pace for the Tigers in the men’s final, Hobbs led the way for four Lady Tigers in the women’s final in the 60-meter dash as she came away among the NCAA’s Top 10 performers in the event.

After matching her personal best entering the meet with a qualifying run of 7.31 (altitude-adjusted to 7.33) to win her preliminary heat, Hobbs slashed her PR by four one-hundredths of a second with her run of 7.27 in the final to bag the bronze medal behind champion Morolake Akinosun (7.20) of Texas and runner-up Cierra White (7.22) of Texas Tech. Hobbs cracked the Top 10 of the NCAA rankings this season as her adjusted time of 7.29 in the final tied for the No. 10 performance nationally among collegians.

Four Lady Tigers actually swept places 3-6 in the final as Hobbs (7.27) was trailed by fellow freshman Mikiah Brisco (7.31) in fourth place, sophomore Jada Martin (7.36) in fifth place and sophomore Rushell Harvey (7.37) in sixth place overall. Like Hobbs, Harvey also crossed the finish line with a new personal best in the final with her time of 7.37 adjusted to a PR of 7.39 due to altitude.

Despite coming up short of a place in the final, three other Lady Tigers set personal bests in the 60-meter prelims with adjusted times by Kiersten Duncan (7.56), Jalea Jackson (7.68) and Tiffany George (7.77).

Moore was unable to challenge for the title in the men’s 60-meter hurdles after committing a false start before the gun fired in the final, but the sophomore transfer from TCU made the most of his one opportunity to run in the preliminary round when he dropped his seasonal best by nearly a tenth of a second for the No. 8-ranked time by a collegian in 2015.

Moore won his qualifying heat with the fastest time of the prelims at 7.78 adjusted for altitude to a seasonal best of 7.80 to become the fifth-fastest LSU Tiger in the 60-meter hurdles in school history.

Senior teammate Joshua Thompson recorded back-to-back seasonal bests for his efforts with a time of 7.88 (altitude-adjusted to 7.90) in the preliminary round and 7.83 (altitude-adjusted to 7.85) in the final to finish a hundredth of a second off the pace set by Texas Tech’s event champion Chris Caldwell with a winning run of 7.82.

Three other LSU athletes came away with personal bests during Saturday’s action, led by junior Fitzroy Dunkley‘s altitude-adjusted lifetime PR of 46.94 for fourth place in the sections of the men’s 400-meter dash. The likes of sophomore Travia Jones and freshman Bria Druilhet also recorded indoor bests as Jones clocked an altitude-adjusted 55.20 for seventh place in the women’s 400 meters and Druilhet jumped a series-best mark of 40-6 for 10th place overall in the women’s triple jump competition.

With this year’s New Mexico Collegiate Classic now in the books, the Tigers and Lady Tigers will make their return trip to the Randal Tyson Track Center in Fayetteville, Arkansas, next weekend to compete as part of the Tyson Invitational running Feb. 13-14 at the University of Arkansas. They will then play host to their LSU Twilight meet on Friday, Feb. 20, at the Carl Maddox Field House.