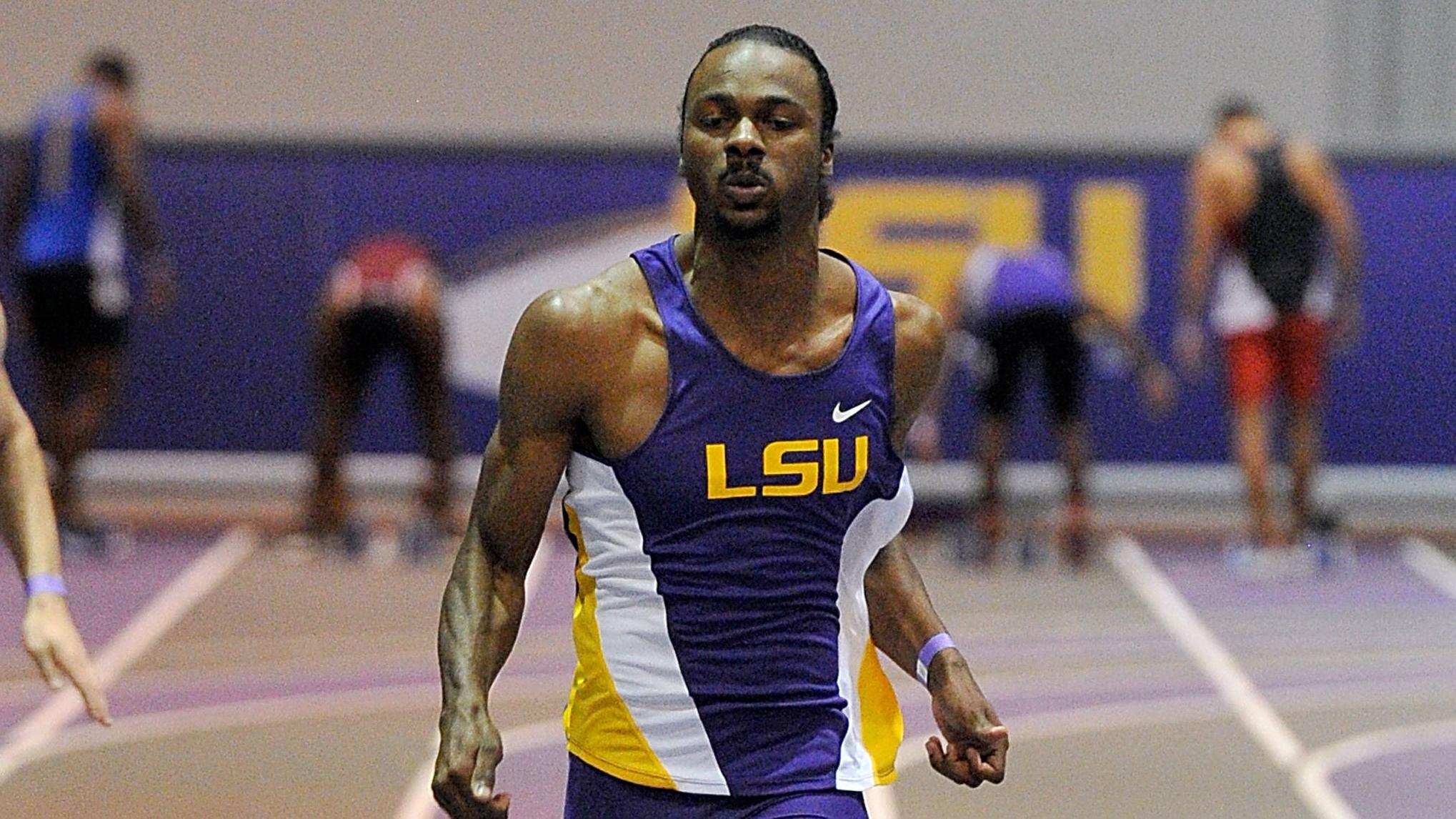 ALBUQUERQUE, N.M. – LSU’s senior All-American Aaron Ernest lined up in Friday’s final on the cusp of the Top 10 of the NCAA rankings in the men’s 200-meter dash, but crossed the finish line as the new national leader with a winning run of 20.66 seconds to set the pace for the LSU Track & Field teams on Day 1 at the New Mexico Collegiate Classic.

Just one week after clocking 20.97 in a fifth-place finish at Arkansas’ Razorback Invitational, Ernest sprinted into the NCAA-title race with his performance at the Albuquerque Convention Center as he crossed the finish line ahead of South Plains College’s Jereem Richards (21.06) with the fastest time by a collegian in 2015.

With the race being run at altitude in Albuquerque near the University of New Mexico, Ernest’s time of 20.66 adjusts to a seasonal best of 20.73 to overtake the previous NCAA-leading duo of Texas A&M’s Shaves Hart and TCU’s Sam Watts each at 20.76. Ernest catapulted himself 12 spots up the NCAA rankings and into the national lead after lining up as the 12th-fastest sprinter in the collegiate ranks.

A former SEC Indoor Champion and All-American in the event, Ernest now finds himself squarely in the national-title hunt while taking one step closer to the NCAA Division I Indoor Track & Field Championships.

“What a way to get us going here in New Mexico this weekend,” remarked LSU head coach Dennis Shaver following the conclusion of Friday’s action. “We continue to take the steps to where we need to be team-wise as we look ahead to the championship season. Aaron is running with a lot of confidence right now, and he pretty much assured himself a spot in the NCAA meet with his performance tonight.”

Another LSU Tiger taking one step closer toward NCAA qualification was fellow senior Rodney Brown, who unleashed a personal-best throw of 69 feet, 3 ¼ inches to lead an LSU sweep in the men’s weight throw.

Brown captured his first weight throw title of the season while raising his personal best by nearly one foot with a series-best throw of 69-3 ¼ during the competition. That effort moved Brown into the No. 16 position in the NCAA rankings this season and solidified his hold on the No. 4 spot on LSU’s all-time indoor performance list in the event.

Brown led a clean sweep of the top four spots by the Tigers in the final standings in the men’s weight throw as senior Jeremy Tuttle uncorked a seasonal best at 62-3 ¼ and junior David Collins posted a seasonal best of his own at 60-6 ½ to finish in second place and third place, respectively. Junior Patrick Geers followed in fourth place with a top throw on the afternoon at 59-11.

Two Lady Tiger rookies added seasonal bests in the women’s weight throw as Gabby Figueroa posted a mark of 60-2 for fourth place and Sidnie Wilder threw a personal record of 56-7 ½ for eighth place.

Two Lady Tiger sophomores were also crowned New Mexico Collegiate Classic champions with their performance in Friday’s opener at the Albuquerque Convention Center when Nataliyah Friar soared to victory in the women’s long jump and Ka’Lynn Jupiter captured the top spot in the unseeded division of the 400-meter dash.

Friar nearly matched her seasonal best with a top jump on the day of 20-5 to edge Arkansas All-American Tamara Myers (20-4 ½) for the title. She remains the NCAA’s No. 12-ranked long jumper this season with a best of 20-5 ¾ on the campaign. Jupiter raced to a new indoor personal best to win the unseeded division of the women’s 400 meters, clocking 55.59 to edge unattached athlete Erica Alexander (55.62) for the win. It is a run that adjusts for altitude to an indoor PR of 55.70, smashing her previous indoor best of 55.69 in the 400 meters by nearly one full second.

Also posting a personal best with her performance during Friday’s action in Albuquerque was sophomore sprinter Rushell Harvey, who finished as the top Lady Tiger in the heats of the women’s 200-meter dash for her time of 24.09 for 13th place overall. While adjusting to 24.16 due to altitude, Harvey edged her previous indoor best of 24.19 set just last week at the Arkansas Razorback Invitational.

Wrapping up Friday’s action for the LSU contingent was senior Andreas Duplantis as he cleared a seasonal-best height of 17-3 to tie for ninth place overall and take second among collegians in the men’s pole vault.

Saturday’s finale at the New Mexico Collegiate Classic gets underway for the Tigers and Lady Tigers at 11:45 a.m. CT with the first preliminary races on the track, followed by the first field events on the day at noon. The action will run through the final events of the weekend with the running of the men’s and women’s 4×400-meter relays beginning at 4 p.m. CT.