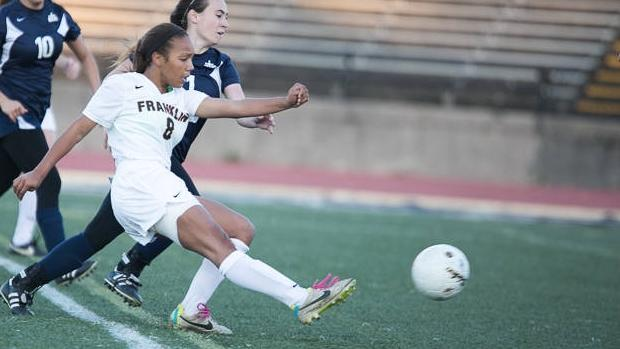 BATON ROUGE – The LSU Soccer program kicked off Wednesday’s National Signing Day with a bang when it announced the signing of Louisiana’s No. 1-ranked recruit in the Class of 2015 to a National Letter of Intent as New Orleans native and Ben Franklin High School product Alex Thomas elected to continue her academic and athletic career with the Tigers.

The reigning Louisiana Gatorade Player of the Year following a brilliant junior season at Ben Franklin High School in 2014, Thomas is a dynamic striker who will join in a potent Tiger attack on the front line with the likes of 2013 Second-Team All-SEC selection and rising junior Summer Clarke and 2014 SEC All-Freshman Team selection and rising sophomore Jorian Baucom.

Thomas becomes the sixth Louisiana Gatorade Player of the Year for girls’ soccer to join the LSU Soccer program as she will be eligible to compete with the Tigers beginning in the 2015 fall season.

“Alex is the highest profile recruit to come out of Louisiana in the last decade. She is a unique combination of goal-thirsty striker and great teammate,” said LSU head coach Brian Lee. “I’m looking forward to seeing her play with our young attacking cadre, and I think she can play a significant role in an exciting front line next fall.”

Not only is Thomas the No. 1-ranked recruit in the state of Louisiana in the Class of 2015, but she is also one of the premier attacking talents in the region as a three-year veteran for the Region III Olympic Development Program Team and seven-year veteran for the Louisiana State ODP Team during her prep career.

She will have competed internationally on two tours with the Region III ODP Team when she arrives on campus following a tour of England in 2014 and an upcoming trip to The Netherlands in the spring of 2015.

Also a standout performer with the Louisiana Fire club team as a youth, she fired the squad to the National Youth Soccer Association Region III Championship in 2013, and a total of seven Louisiana club state titles in her age group during her eight-year association with the program. Not only that, but she scored two goals in a 3-0 victory over a club side from England in the semifinal and two goals in a 3-1 win over a team from Holland in the final to bring the One Nation Cup title back to the United States in the prestigious tournament held in Germany in 2011.

A three-time Vulcan Cup champion with the Louisiana Fire, Thomas has also competed in such prestigious club tournaments as WAGS, Disney Showcase, CASL College Showcase and Las Vegas Shootout in her tenure.

One of the most decorated soccer players in Louisiana during her time at Ben Franklin High School, Thomas has been named a Louisiana Division II State Most Valuable Player while leading her high school team to back-to-back state championships in 2013 and 2014. In addition, she has been named a two-time District Offensive MVP and three-time all-district and all-metro selection during her career.

Thomas’ success has not been limited to the soccer field as she has also excelled in the classroom throughout her time at Ben Franklin High School while maintaining a 3.98 cumulative grade-point average going into her final semester with the Falcons. She plans to major in pre-medicine during her college career while continuing her athletic and academic career as an LSU Tiger.

Fans should stay tuned the rest of this week as the LSU Soccer program will announce the signing of a new recruit to a National Letter of Intent each day while looking ahead to the 2015 season. Daily recruiting updates and complete player bios will be posted through Friday on http://LSUsports.net.