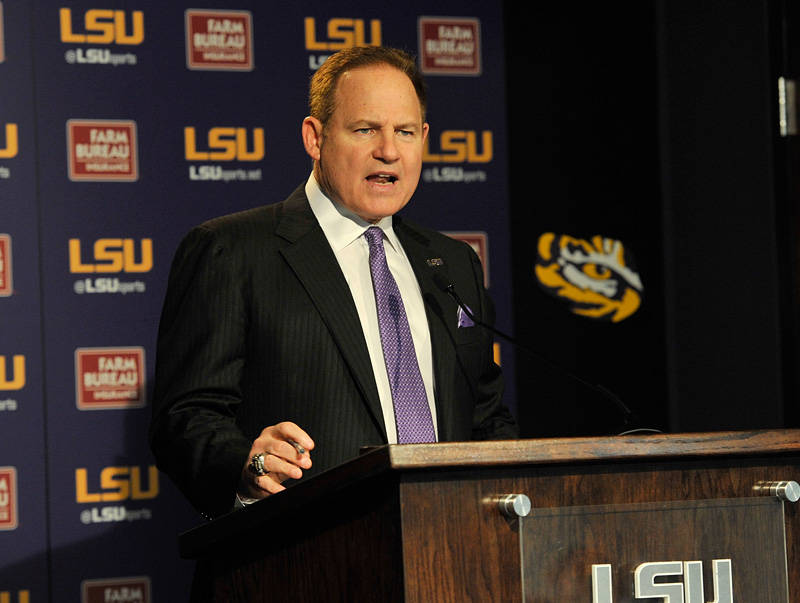 BATON ROUGE – LSU hauled in another top 5 rated signing class on Wednesday as the Tigers signed seven of the 10 highest-rated players in Louisiana while also picking up top prospects from Florida, Georgia, Texas and Ohio.

LSU signed a total of 25 players with 17 of those coming on the offensive side of the football. LSU added six on defense to go along with one punter and one long snapper. The list of signees include 16 from Louisiana, four from Texas, three from Georgia and one each from Florida, Ohio, and Australia.

“This is the first time in 10 years that we have been ranked in the Top 5 back to back,” LSU coach Les Miles said. “We really won’t know about this class for a year or two but it’s got the balance of speed and size and it’s a class where character and quality people, as well as talent, are throughout.

“This is a class that in my mind can help us compete for championships and certainly for a spot in the college playoffs.

The Tigers filled a need on the offensive line, signing five players at that spot, including 5-star prospect Chidi Valentine-Okeke from Georgia along with 4-star recruit Maea Teuhema, who was considered the top offensive lineman in the state of Texas. LSU added the top offensive tackle in Ohio in George Brown. Maea Teuhema is the younger brother of LSU defensive end Sione Teuhema, who just completed his first year with the Tigers.

Two of the most productive running backs in the history of Baton Rouge prep football added their names to the LSU roster as University’s Nick Brossette and Catholic’s Derrius Guice signed with the Tigers. Guice rushed for nearly 2,500 yards and 32 touchdowns over his last two years at Catholic to earn a 5-star rating, while Brossette capped his U-High career with 9,214 rushing yards and a state record 141 touchdowns.

A third running back, Lanard Fournette, signed on Wednesday and is the younger brother of Leonard Fournette, who just finished his rookie season with the Tigers.

LSU’s crop of wide receivers is highlighted by 5-star prospect Tyron Johnson from Warren Easton High School in New Orleans. Johnson has been rated as high as the 11th-best overall prospect in the nation after catching 94 passes for 1,589 yards and 17 touchdowns as a senior.

Other receivers in the class include Jazz Ferguson, Derrick Dillon and Brandon Martin.

Defensively, Kevin Toliver II, who is already enrolled at LSU, is a 5-star cornerback that is ranked as high as the ninth-best prospect in the nation. He’s joined on defense by Arden Key, the top defensive end in Georgia along with 5-star cornerback Donte Jackson from Riverdale High School in Jefferson, La.

Josh Growden becomes the third straight punter from Australia to sign with the Tigers, joining former All-America Brad Wing and returning starter Jamie Keehn. Wing just finished his first full year in the NFL with the Pittsburgh Steelers, while Keehn ranked second in the Southeastern Conference in punting in 2014 with a 44.9 average.

Long snapper signee Blake Ferguson followed in the footsteps of his older brother and current LSU snapper Reid Ferguson. The Ferguson brothers give the Tigers three sets of siblings on the team, joining the Teuhema’s and the Fournette’s.

A total of four of the newcomers are already enrolled in class at LSU and will take part in spring drills with the Tigers. Joining Toliver II as early enrollees include fullback David Ducre III, tight end Hanner Shipley and quarterback Justin McMillan.

For signee bios and more on the Tiger newcomers, visit www.LSUsports.net/signingday.