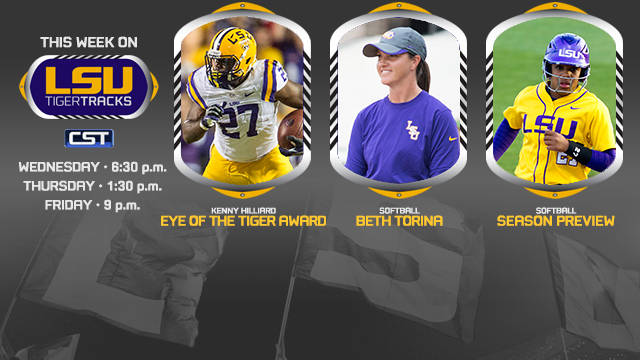 LSU Tiger Tracks begins with a feature by correspondent Garrett Walvoord on senior running back Kenny Hilliard, who has been designated as the winner of the 2014-15 Eye of the Tiger Award, given each year to the Fighting Tiger student-athlete who best demonstrates the spirit necessary to overcome adversity and rise to a high level of success.

The show continues with a visit to the studio from softball coach Beth Torina, who discusses the opening of the 2015 season when the Tigers play host to Memphis at 4 p.m. Friday in Tiger Park.

LSU Tiger Tracks concludes with a report by Walvoord on the softball team’s preseason media day, as the Tigers discuss their goal to reach the Women’s College World Series in Oklahoma City, Okla.