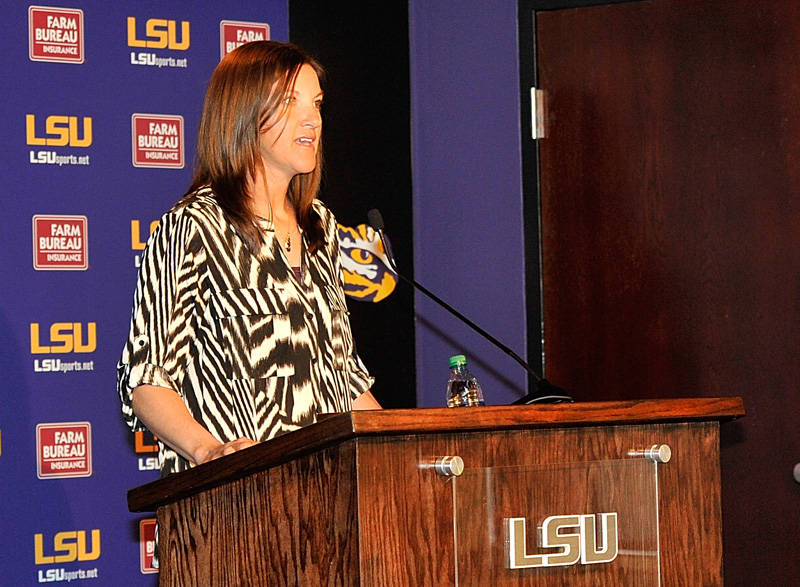 BATON ROUGE, La. – Just a few days removed from the season opener against Memphis this Friday, head coach Beth Torina and members of the 19th ranked LSU softball team were on hand for the team’s annual Media Day, previewing the 2015 season that starts at 4 p.m. at Tiger Park this weekend.

Torina, along with senior outfielder A.J. Andrews, junior infielder Bianka Bell, sophomore pitcher Baylee Corbello and catcher/infielder Sahvanna Jaquish, looked ahead to the upcoming campaign and gave their thoughts on the strong crop of returning players and the excitement in the addition of their seven newcomers to the roster.

The 2015 Tiger Classic, the table-setter for the squad’s season, opens with the Memphis Tigers before taking on the Eastern Illinois Panthers at 6:30 p.m. LSU also welcomes Tennessee State and NC State also to Baton Rouge, taking on TSU Saturday at 3 p.m., with games against the Wolfpack at 5:30 p.m. Saturday and 11:30 a.m. Sunday.

Season tickets for the 2015 LSU softball season also on sale for $75, as the Tigers will play a total of 35 games in Tiger Park in the upcoming season. For more information on purchasing season and single-game tickets, visit www.LSUTix.net or call (225) 578-2184.

Below are some quotes from Media Day.

Opening Statement….
“I just want to start by thanking everyone for being here. We appreciate you guys taking the time to cover our team. I think we have a great product that we are going to put on the field this year. We appreciate you taking the time to cover them and giving them the time that they truly deserve and earned during the offseason preparation. As I start off today, I am brought back to the 2014 season. I am reminded of a different feeling when we ended that 2014 season. Typically, the last game, there are a lot of tears, a lot of pain, a lot of heartbreak. Of course, we did have some of that sending our seniors out who were truly instrumental for my staff and I bridging the gap between Coach Girouard and my staff. I think those guys were really instrumental in teaching us the traditions and the things that go along with being a part of LSU, and some of Coach Girouard’s traditions that we still uphold today. After the tears stop, we had a different feeling with this group, a feeling of hope and motivation. It wasn’t like we needed the whole summer to take a break and recuperate. It was more of feeling of wanting to be back on the field and practice immediately. I think the way it sums up to me is in the game against Boston University in the regional where we saw a bunch of freshmen do some pretty amazing things. Our team was down to the last out, and our team was able to come back after the bats of Bailey Landry and Sahvanna Jaquish. We rode on the back of Kelsee Selman who was hit by a line drive in the first inning and still went on to pitch seven innings. It was an amazing performance. We saw these freshmen that were capable of some amazing things. We put three freshmen on the All-SEC team, which is a school record, Baylee Corbello, Bailey Landry, and Sahvanna Jaquish. We saw Sahvanna Jaquish be named an All-American. There were some big things out of that freshmen class. It really made us excited about what is to come. We add members of our signing class with Allie Walljasper and Emily Griggs, who were both members of the junior national team, and our big addition this summer of Carley Hoover who transferred from Stanford. She was the 2013 Gatorade National Player of the year. We were very fortunate to get a play like that to come to LSU, who I think will make an immediate impact on this program. We also added two players from Louisiana, Taylor Lockwood who received the Golden Spikes Award, and Sydney Bourg. All of that makes us extremely hopeful to what’s to come in the 2015 season. Adding those young kids to our strong upperclassmen with our All-American A.J. Andrews, Kellsi Kloss, Sandra Simmons, and of course Bianka Bell. She was invited to the women’s national team tryouts and she has been named to the top-50 watch list for this season. We are really excited about the core players. I think we have a really talented group. I also think this group has some intangibles that I think you will see throughout the season. They really put the time in and have an amazing work ethic. This is the hardest working group we have ever had in the weight room. There are twenty players who can squat over 200 pounds. Bell has the softball record of 325 pounds. They have worked really hard. I think we have a strong leadership core, especially with our three seniors, A.J. Andrews, Kailey McCasland, and Dylan Supak. They really understand where this program is trying to go. They understand our direction and our theme this year, which is the power of one. It unites these twenty girls into one team focused on one goal, which is to play in the college world series and play for a national championship. This team will take on a really strong strength of schedule. Again for the third year in a row, we face the number one non-conference strength of schedule. These guys love the challenge and are ready for it. They came to LSU to be challenged and that is why they play in the SEC, which we feel is the toughest conference in the country. Nine of the 13 teams are ranked in the top-25 this preseason. Again, they take on a really strong schedule with a lot of non-conference ranked opponents as well, including No. 4 Oklahoma who we play at home in March. I think the crown jewel of this schedule is that we are hosting the SEC Tournament this year in Baton Rouge. It will be the largest tournament of history for the SEC with 12 teams. I think it will be a great opportunity for the state of Louisiana to see some of the best softball in the country. We couldn’t be more excited about being the host of that event. I think you are going to see this team have a great record and accomplish some great things. I think the fans will really enjoy watching this group. They are amazing young women on and off the field. I think they are a team that will make the Tiger fans truly proud of their softball this season.”

On the being the best combination of hitting and pitching…
“There is no question that this is the most talented team we have had. With the power numbers this team put up setting the program record with 65 homeruns and the second best batting average in school history with .314 last year, I think they have shown they can hit for power. They have great speed. A.J. Andrews stole 38 bases last year. I think they can do a lot of things there. We return Bailey Landry who hit .368 last year. They have great offensive potential. When you add this pitching staff, you really have a lot of different looks. We will be able to match up better than we have before. We have a really nice package. We will present a tough team no matter who we are playing.”

On the pitching staff…
“I think the nice part about our pitching staff is that all pitchers are very different. All four of them bring something different to the table. Carley Hoover is obviously the hardest thrower. She is a power pitcher. She is great competitor. I think she challenges the entire bullpen on a daily basis. I think they are all very different. Baylee Corbello changes speeds as well as anyone I’ve seen. I think Kelsee Selman has a really strong rise-ball and some of the different things she brings. Allie Walljasper kind of does it all. She just really understands how to pitch and how to put the ball in a good spot. I think there is a place for all four of them, and they are all extremely valuable. They will make our team that much tougher. I think it will be really hard to prepare for that staff when you really don’t know who you might face.”

On the leadership of the team coming from anywhere on the roster….
“I think the good thing about this team is that we have multiple people who can step up at any point in time and be a leader. Whether it’s a senior or one of the freshmen, we have a group that is all working toward the same goal of being better today than they were yesterday and reaching our goals that we set before the year started.”

On how special this group can be….
“I’m just so excited and blessed to be on this team, with these girls, who I know have my back no matter what. If we continue to work the way we have since last season ended through the fall and now spring, I think we can go as far as we want.”

On returning to the circle with a year under her belt….
“I definitely know what to expect every time we take the field, really using the offseason to get better in every way. Definitely working on being consistent and hitting my spots and limiting the chances for other teams to get free passes.”

On her progression from one season to the next….
“One of the best things about the coaching staff is they never let us feel comfortable because they know our strengths and weaknesses and force us to adjust and be better. I have a great team around me that’s so talented top to bottom that they push me to get better every time I step on the field.”