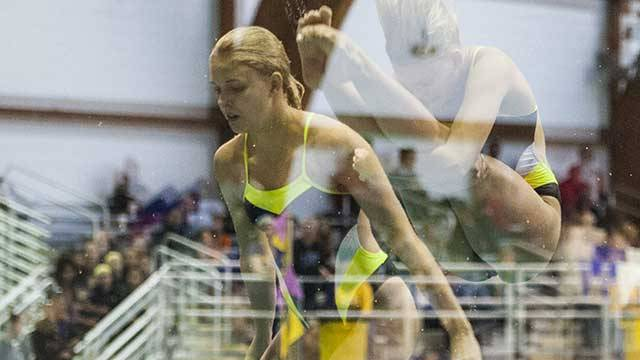 COLLEGE STATION, Texas — In her first collegiate platform competition, freshman Madison Sthamann posted the second-highest score (306) in LSU Diving history to earn the win on the final day of the Art Adamson Invitational.

“I’m really proud of Madison’s performance,” LSU Diving coach Doug Shaffer said. “Her last two performances have been stellar. Overall though there were some things I really liked. I’m really optimistic with what we’ve done. We’re only half way through the season so this gives us a blue print for the rest of the season.”

The LSU women’s team ended the event in third place with 634 total points, while the men finished second behind Stanford with 573 points.

“Overall I was pleased with our performances throughout the invite,” LSU Swimming coach Dave Geyer said. “It was a long three days with a lot of racing but that’s what we came here to do. There is a ton of potential with this team, and I am really looking forward to the second half of the season.

To start the individual events, Danielle Stirrat (1:55.36) finished fourth and Caley Oquist (1:55.53) finished sixth in the championship final of the 200 back.

The swim team takes the next six weeks off from competition before returning to Texas to take on SMU Jan. 3. The divers return to competition mid December when they split for the USA Diving Winter Championships and the LSU Diving Invitational.