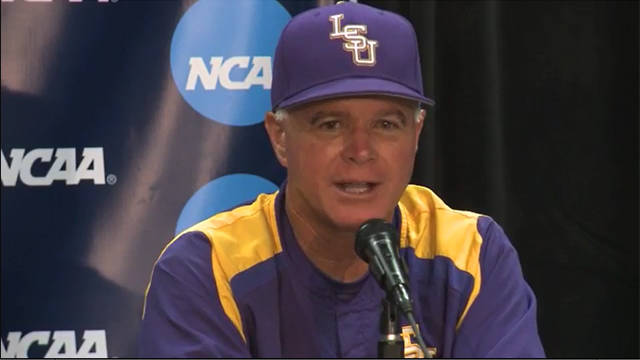 BATON ROUGE, La. – LSU is among the teams predicted to reach the 2015 College World Series by Perfect Game in its annual “Eight for Omaha” projection released on Monday. The Tigers are joined by Vanderbilt, Florida, Virginia, Texas, North Carolina, TCU and UCLA as Perfect Game’s favorites to play in next year’s CWS.

SEC schools South Carolina and Ole Miss are listed in the “Ten More to Watch” category, and Tennessee and Texas A&M are among Perfect Game’s “Five Potential Surprises.”

Perfect Game’s Kendall Rogers writes of LSU:  “The Bayou Bengals will be hungry for success after falling just short of their ultimate goal in 2014. LSU will return a very solid offensive lineup from a team that finished last season with a .287 batting average. Andrew Stevenson, Alex Bregman, Conner Hale and Kade Scivicque are back, while speedy Mark Laird and Jake Fraley also are back in the mix. Offense definitely isn’t a question mark for this club as it heads into the offseason.

“There are question marks on the mound with the departures of All-American right-handed pitcher Aaron Nola and reliever Joe Broussard. However, the Tigers should be fine with Kyle Bouman, Jared Poche’, Alden Cartwright, Zac Person and others back. LSU also gets an infusion of big-time prep talent in the fall.”

All 11 signees scheduled to be with the Tigers this fall are ranked among Perfect Game’s Top 500 Prospects:

Rogers concludes that “those young, premier arms combined with some experienced returning arms should be a good combination for a team looking to take the next step.”

LSU signee Bobby Bradley, No. 149 in the Perfect Game rankings as an infielder, was the third-round draft choice of the Cleveland Indians and opted to sign a pro contract after receiving a substantial signing bonus offer.