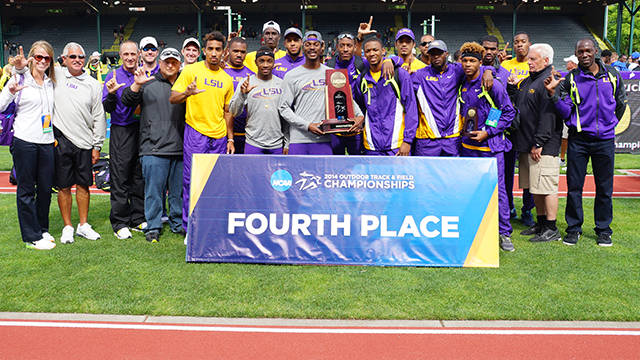 EUGENE, Ore. – Silver medals by senior Jasmin Stowers and junior Tori Bliss and bronze medals by the Tigers in both relays capped an outstanding weekend for the LSU Track & Field teams at the 2014 NCAA Division I Outdoor Track & Field Championships as the Tigers tied for fourth place and the Lady Tigers finished in sixth place in their season finale at Oregon’s Hayward Field.

The Tigers raced to a pair of bronze-medal-winning third-place finishes in the relays with times of 38.85 in the 4×100-meter relay and a seasonal best of 3 minutes, 1.60 seconds  in the 4×400-meter relay.

After running the second leg for the Tigers in the 4×100-meter relay, junior Aaron Ernest lined up in the NCAA final in the men’s 200-meter dash and crossed the finish line with a wind-aided time of 20.31 to capture his best career NCAA finish of fourth place to help lead the Tigers to the team trophy podium with his efforts.

The Tigers scored 29 points in four days of action at Oregon’s Hayward Field to tie Southern California for fourth place in the final men’s team standings at this year’s NCAA Division I Outdoor Track & Field Championship held once again in Eugene. The hometown Ducks won the men’s team title with 88 points, followed by Florida in second place with 70 points and Texas A&M in third place with 41.5 points.

The Lady Tigers piled up 34 points during the competition to finish on the cusp of the Top 5 in sixth place in the final women’s team standings. Texas A&M outlasted in-state rival Texas to take home the women’s NCAA team title with 75 points for the meet. The Longhorns followed in second place with 66 points, while Oregon (59), Florida (55) and Georgia (35) rounded out the final women’s NCAA team standings.

“I’m so very proud of the effort showed by our athletes and our staff over the seven days of this NCAA track meet,” said LSU head coach Dennis Shaver. “We had a great three days in Jacksonville two weeks ago and a really outstanding four days here in Eugene this weekend across the board to get to this point. These last four days have really shown how hard we’ve worked as a team since the very start of fall training to perform at our very best when it mattered the most. I’m proud of everyone for the effort they gave our program here this weekend.

“It’s not always perfect, and there may have been some bumps along the way, but we can all be proud of what this group has achieved this season. They were outstanding during these NCAA Championships.”

Bliss proved to be the breakout star of this year’s NCAA Championships for the women’s team as she became the first Lady Tiger in 20 years to earn All-America honors in the shot put, opening with a mark of 55 feet, 0 inches in the first round and then raising her performance with a school record and leading mark of 57-4 ¼ in the second round to take the lead into the final rounds of throws.

Despite fouling each of her first two throws in the final, Bliss held her position atop the event standings with just one round separating herself from history as LSU’s first shot put national champion. That’s when a mark of 58-2 by Iowa State’s Christina Hillman grabbed the lead in the final round as the Cyclone standout was crowned the NCAA Champion. Bliss was unable to raise her school record for a second time on her final attempt as she settled for silver and the highest finish in the event by a Lady Tiger in program history.

A native of Portage, Indiana, Bliss became just the fourth shot put All-American in school history on the women’s side, and the first since Lady Tiger great Danyel Mitchell claimed three-straight honors both indoors and outdoors from 1992-94. LSU’s other shot put All-Americans include Teresa Williford indoors from 1985-87 and outdoors in 1986 and Laverne Eve indoors in 1988.

Bliss broke her own school record of 56-9 ¼ that she set in a victory at the LSU Invitational back on May 3 in the team’s regular-season finale held at the Bernie Moore Track Stadium in Baton Rouge.

“It felt effortless. That’s something that a big throw should feel like,” Bliss said of her school-record shot put. “It was just amazing. As soon as it left my hands, I could kind of tell that it was a big throw. It felt great, it felt awesome. I was really excited when I saw the distance on the board. After the first one, I felt like I would have a good shot to make the final, so I had more throws to really go after it.

“That’s what I did on that second throw. I was really able to go after it and unleash that one. It’s all about feeling comfortable and confident in the ring. The throws I took in the final didn’t feel as clean. The last one was a good distance, but I don’t know if it would have been enough. I can’t be too upset with a PR in the biggest meet I’ve been in to this point, so congrats to her (Christina Hillman).”

While Bliss set a school record in the shot put, a legal tailwind is all that separated Stowers from a school-record run in her final hurdle race as a Lady Tiger when she scored the NCAA silver medal in the 100 hurdles.

Stowers became the fastest hurdler under all conditions, wind-legal and wind-aided, in the history of the Lady Tiger program as she crossed the finish line with a wind-aided time of 12.54 (+2.8) to score the NCAA silver medal with her best finish at the NCAA Championships between the indoor and outdoor seasons. She finished just a split-second shy of capturing the national championship in her final hurdle race as a Lady Tiger when she crossed the finish line behind Arkansas State’s Sharika Nelvis (12.52w) for the NCAA title.

Stowers had already set LSU’s indoor school record in her final collegiate race in the 60-meter hurdles while running 7.96 in a bronze-medal-winning performance at the NCAA Indoor Championships back in March. The wind in Saturday’s final might have negated a school record outdoors, but she did become the fifth-fastest hurdler in NCAA history under all conditions with her performance.

Stowers cemented her place among the great hurdlers to ever lace up a pair of spikes for the Lady Tigers as a five-time SEC Champion and seven-time All-American in the sprint hurdles in four seasons from 2011-14.

“My feeling after finishing the race and seeing my name pop up on the board, I couldn’t believe I was that close to winning. It was pretty amazing to see 12.5 on the board,” Stowers said. “I thought I had it at the end at that time, but they said her name first, so I knew it was going to be close. Running 12.8s and 12.9s all season, and then coming here to nationals, that’s a big drop. I think it shows how far I’ve come this season.”

The Tigers’ sparked their run to the fourth-place team trophy with a bronze-medal-winning third-place finish in the men’s 4×100-meter relay final in the opening event on the track in Saturday’s finale.

After qualifying for the sprint relay final with the third-fastest time of the semifinal round at 38.85 on Wednesday afternoon, the Tigers matched that effort as the team of sophomore Nethaneel Mitchell-Blake, Ernest, freshman Tremayne Acy and senior Shermund Allsop bagged the bronze with a third-place finish. They improved upon their fourth-place finish nationally from a year ago.

The Tigers actually held the lead in the race at the final exchange between Acy and Allsop, but Dedric Dukes brought the Florida Gators back from third place at the exchange to the NCAA title with a blistering anchor as they crossed the finish line first with a winning run of 38.73. Texas A&M nipped LSU at the finish line with a runner-up time of 38.84, while the Tigers matched their semifinal time of 38.85 for third place.

Their third-place finish in the spring relay final moved the Tigers into the Top 10 of the team standings for the first time this weekend into eighth place with 18 points for the championship.

Ernest later returned to the track for the final of the men’s 200-meter dash, and added five more points to the Tigers’ team total with a fourth-place finish nationally as he crossed the finish line with a wind-aided 20.31 (+2.1) to earn his eighth career All-America honor as one  of the nation’s elite sprinters. Ernest’s five points in the event moved the Tigers into sixth place in the men’s team standings with 23 points for the meet.

It was Ernest’s second career appearance in an NCAA final outdoors in the 200 meters as he improved upon his previous start when he placed fifth nationally in the event as a freshman during the 2012 season.

After anchoring Florida to the NCAA title in the 4×100-meter relay, Dukes was crowned the NCAA Champion in the men’s 200 meters as he took the tape in a windy 19.91 (+2.1) for the fourth-fastest winning run during the history of the NCAA Championships. USC’s Aaron Brown (20.02w) scored the silver medal, while Northwestern State’s Justin Walker (20.13w) bagged the bronze ahead of Ernest (20.31w) in fourth place overall.

Ernest also crossed the finish line in the 200-meter final in fourth place ahead of other finalists Baylor’s Everett Walker (20.42w) in fifth place, Auburn’s Khalil Henderson (20.61w) in sixth place, Oregon’s Arthur Delaney (20.79w) in seventh place and Texas-Arlington’s Clayton Vaughn (26.22w) in eighth place to round out the field.

“Going into the race, I knew that I really had to get out in order to be leading against guys like Dedric Dukes and Aaron Brown,” Ernest said following the race. “I was right with them at 150 meters, but they kind of got a half step on me and pulled away at the end. I felt great at 150 meters, but then my legs kind of died on me. I just didn’t have it at that point. You have to give those guys a lot of credit.”

Fresh off of his third-place finish nationally in the final of the 400-meter hurdles on Friday night, junior Quincy Downing set the pace for the Tigers with a strong leadoff leg before handing off to sophomore Darrell Bush at the first exchange. Bush kept the Tigers close to Texas A&M and Florida with a blistering second leg before handing off to sophomore Cyril Grayson at the second exchange. Grayson turned in a 45.14-second split for the third leg before junior Vernon Norwood brought the Tigers home in 44.52 for the sixth-fastest time in school history at 3:01.60 for third place.

In other action, Lady Tiger senior Lynnika Pitts tied for 16th place in the women’s high jump competition with a clearance of 5-7 ¾ just one day after earning All-America honors with a lifetime personal best of 44-1 ¼ in a fourth-place finish in the triple jump final on Friday night. The Lady Tigers also did not finish the women’s 4×100-meter relay final after missing the second exchange.