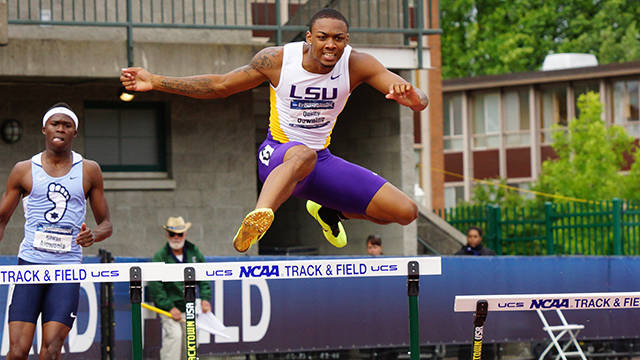 EUGENE, Ore. – Bronze-medal-winning third-place finishes by juniors Quincy Downing and Vernon Norwood and a lifetime personal best turned in by senior Lynnika Pitts sparked a scoring barrage by the Tigers and Lady Tigers during Friday’s action at the 2014 NCAA Division I Outdoor Track & Field Championships being held this weekend at Oregon’s Hayward Field.

Pitts certainly saved her best for last when she jumped a lifetime PR of 44 feet, 1 ¼ inches on her sixth and final attempt in the triple jump to move up two spots into fourth place in the final standings.

Not to be outdone, senior Nikita Tracey and junior Chanice Chase followed Downing by adding nine points for the Lady Tigers’ team total with a 4-5 finish in the final of the women’s 400-meter hurdles as Tracey posted a time of 56.35 for her second All-America honor in the event with a fourth-place finish and Chase followed with a run of 56.51 for her first career All-America honor in the event with a fifth-place finish.

“We’ve really positioned ourselves well  to have a great finish to this track meet. It all comes down to one last day tomorrow,” said LSU head coach Dennis Shaver. “We’ve given ourselves seven chances to score points tomorrow, and we need to take advantage of each one of those opportunities. We will do that if our athletes approach tomorrow just like they have with each day here.”

Downing got the LSU Track & Field teams off to a blistering start as he broke 50 seconds for the first time in his collegiate career with a 49.97 clocking to emerge as the NCAA Bronze Medalist in the 400-meter hurdles.

Using his trademark strong finish over the final 100 meters, Downing moved from fifth place in the race coming off the final curve into third place at the finish line as he became the No. 7-ranked LSU Tiger in the team’s history in the event with his run of 49.97 out of lane No. 6. That performance smashed his previous best by more than a half second as he entered the meet with a top time of 50.49 set in the NCAA quarterfinals during the NCAA East Preliminary Rounds held two weeks ago in Jacksonville, Florida.

“It was a helluva race because I had some good competition down in lanes three, four and five. They had faster PRs than me, so my job was to maintain my composure, stay relaxed and not make mistakes,” said LSU’s newest All-American hurdler in Downing. “I just had to stay calm and try to pick off as many as I could in the stretch and clear the last hurdle as clean as I could.”

With the grandstand still buzzing from an exciting finish to the first track final of the day, the Lady Tigers took their marks in the final of the women’s 400-meter hurdles and turned in a pair of outstanding performances as Tracey scored five points with a fourth-place finish and Chase added four points with a fifth-place finish in an event that could have been mistaken for an SEC final.

Texas A&M’s Shamier Little (55.07) took the tape by nearly a half second ahead of Kentucky’s Kendra Harrison (55.55), while Texas A&M’s Janeil Bellille (56.14) rounded out the medalists in the event. Tracey and Chase matched their finish from the SEC Championships while adding a crucial nine points to the Lady Tigers’ team total in the meet.

It marks the third-straight season in which a Lady Tiger has earned All-America honors in the 400 hurdles following Cassandra Tate’s NCAA title in 2012 and Tracey’s seventh-place finish nationally a season ago.

“I went into the race as I normally did and I felt OK early,” Tracey said. “I was not as tired as I thought I would be, and we were all kind of right there coming around the last curve. I thought I finished strong, but my time wasn’t as fast and they just had a little more speed. it was good that Chanice and I could give the team some points. They were counting on us and it felt good to score and give them some good points.”

Like Downing, Norwood found himself running in fifth place off the final curve in the final of the men’s 400-meter dash, and used a strong finish to emerge from the field as the NCAA Outdoor Bronze Medalist with the time of 45.45 in the event. Norwood came up just one spot shy of matching his indoor performance when he scored the NCAA Indoor silver medal as one of the nation’s elite 400-meter sprinters for 2014.

The race turned into a dead heat between Texas A&M’s reigning NCAA Indoor champion Deon Lendore and Oregon hometown favorite Mike Berry for the title as Lendore crossed the finish line in 45.02 ahead of Berry at 45.07 in one of the exciting races of the day. Norwood followed with a bronze-medal-winning third-place finish with his 45.45 clocking in the final.

“Coming off that bend, I knew I had to hit it hard and finish the race,” Norwood said. “I tried not to look at anybody else, just tried to focus on finishing the race and do the best I could for my team. At these meets, you get all kinds of conditions. You just have to prepare for it. There was a headwind (on the backstretch), we all got the same wind. We just had to compete hard and see who wanted it more.”

Norwood also talked about his motivation in returning to Hayward Field in Saturday’s finale looking to complete the NCAA title sweep in the 4×400-meter relay for the 2004 season after the Tigers have already won the NCAA Indoor crown in the event to clinch an eighth-place team finish indoors at the NCAA Championships.

Pitts capped an outstanding day of competition for the Tigers and Lady Tigers by earning her first career All-America honor outdoors in the triple jump when she soared to a lifetime best of 44-1 ¼ (+0.0) in her sixth and final attempt as a collegiate athlete. She moved herself up two spots in the final standings with that jump as she secured fourth place while becoming the No. 7-ranked triple jumper outdoors in program history.

Pitts, a two-time NCAA Indoor All-American and the 2014 NCAA Indoor Bronze Medalist in the triple jump, qualified for the final in fourth place with a top mark of 43-3 ¼ in the preliminary round, but slipped back into a sixth-place position after being passed by Nebraska’s Ellie Ewere (43-7 ¼) and Baylor’s Brianna Richardson (43-3 ¾). That’s when Pitts dug deep with her final triple jump as a Lady Tiger, hitting the board and soaring out to a career-best mark of 44-1 ¼ for a crucial five points in the event.

Pitts will have one last opportunity to add to LSU’s point total during Saturday’s finale when she competes in the women’s high jump at the NCAA Championships for the first time in her collegiate career.

“It was bittersweet because I wanted to get in that Top 3 like indoors, but it was great too at the same time because I had never scored at nationals outdoors before,” Pitts said of her final jump. “I didn’t have anything to lose at that point. It was my last collegiate triple jump, and I just went for it. I might not have gotten the place I wanted, but I stayed in it until the very end for my team.

“I was struggling in the finals, so I backed up a little bit on the runway to make sure I hit the board like I needed to and not foul. When I get excited like that, I take up more of the board. I gave it everything I had for my last jump. I knew I had to do something to help the team out, not just for myself. Moving up to fourth was a big personal and team accomplishment.”

Just missing a spot in the NCAA finals during Friday’s competition was Tiger junior Rodney Brown as he posted a top throw of 191-10 in the qualifying round of the men’s discus to earn 10th place overall and finish only a spot out of the Top 9 for the finals. Brown, who earned All-America honors with a fourth-place finish nationally a year ago, ends his 2014 collegiate season as LSU’s school-record holder with a seasonal best of 210-10.

Saturday’s finale at the 2014 NCAA Division I Outdoor Track & Field Championships kicks off at 2:30 p.m. CT with the first field events of the day. LSU Track & Field will feature for the first time at 2:45 p.m. when Pitts has an opportunity to compete in the women’s high jump. The men’s and women’s 4×100-meter relay finals will get the ball rolling on the track beginning at 4:03 p.m.

ESPNU will feature a live television broadcast of Friday’s action at Hayward Field from 4-6 p.m. CT, while fans can also watch the Tigers and Lady Tigers in action during that time on Watch ESPN. fans can also receive live updates of the Tigers and Lady Tigers by liking LSU Track & Field on Facebook on http://facebook.com/lsutrackfield and by following @LSUTrackField online at http://twitter.com/lsutrackfield.