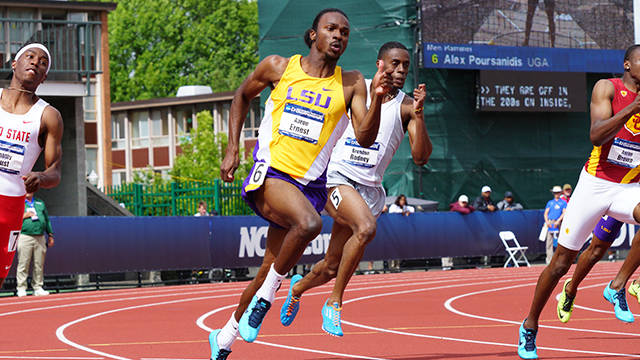 EUGENE, Ore. – The LSU Track & Field teams added a trio of national finalists to their weekend scoring opportunities during Thursday’s second day of competition at the 2014 NCAA Division I Outdoor Track & Field Championships as the semifinal rounds are now in the books in the event being held this week at Hayward Field at the University of Oregon.

Earning their spots in NCAA finals again this year were Lady Tiger senior Jasmin Stowers in the women’s 100-meter hurdles and Tiger junior Aaron Ernest in the men’s 200-meter dash, while the Tigers wrapped up their appearance Thursday with a qualifying performance in the men’s 4×400-meter relay as they look ahead to a busy weekend at the NCAA Championships.

LSU’s teams have now combined for nine NCAA finalists in two days of semifinal action at Hayward Field as they look to add big points to their totals and push for top finishes on the weekend.

“I’m very pleased with the way our athletes continue to approach this meet by taking it just one day at a time, and preparing themselves as best they can to compete at their full potential,” said LSU head coach Dennis Shaver. “That’s what has gotten us to this point to put us in the position that can now think about scoring the points needed to finish really strong as a team on both sides.

“We’ve done just about all we can through two days here in Eugene, and now we will get back to the hotel, get some rest and prepare ourselves to have another great day tomorrow. It’s one day at a time.”

After just missing a spot in the 100-meter final in Wednesday’s opener, Ernest bounced back in a big way in Thursday’s 200-meter semifinals as he clocked the second-fastest time in the field with his run of 20.55 (-0.6) to finish runner-up to Southern California’s Aaron Brown (20.45) in the first of three heats. It marks the second time in his collegiate career that Ernest will line up in the NCAA final of the 200-meter dash outdoors after also earning All-America honors with a fifth-place finish nationally as a freshman in 2012.

Joining Ernest in the first 200-meter semifinal was sophomore teammate Nethaneel Mitchell-Blake, who followed in fourth place in the heat and 12th place overall in the field with his time of 20.93 (-0.6).

“Most definitely,” Ernest exclaimed about not needing any extra motivation to run in his 200-meter semifinal. “I knew I had to get ready for the 200. The biggest thing was I just had to forget about the past. I was bitter about it, but I put myself in the hole after the first 10 meters (in the 100). I was very disappointed with that, but you have to have a short memory in a meet like this.

“Today, that race was gone from my mind. When I got to the track, it was all about running the 200 meters. I wound up running the second-fastest time of the day, so I’m happy about that.”

Stowers was LSU’s second athlete to earn her spot in an NCAA final during Thursday’s semifinal action when she took the tape in the second of three heats in the women’s 100-meter hurdles. Stowers recovered from a slow start by surging into the lead over the fifth and sixth hurdles and to the win at the finish line with a heat-winning time of 12.98 (-0.7) ahead of Baylor’s Tiffani McReynolds (13.11) in the race.

Stowers has earned her lane in the NCAA final of the 100-meter hurdles for the third-straight season following a fifth-place finish nationally as a sophomore in 2012 and a seventh-place finish as a junior a year ago.

“The main focus was just to get to the next round, but I needed to get a good start and get out (of the blocks) and finish,” said Stowers, who was one lane over from Baylor’s Tiffani McReynolds. “Tiffani is known to get out fast, so once I ran past her I knew it was good. It was just all about getting to the next round today.”

The Tigers are perennial NCAA finalists in the men’s 4×400-meter relay, and the 2014 NCAA Indoor Champions will be eyeing an NCAA title sweep this year in Saturday’s finale after winning the third of three heats with the second-fastest time of the day at 3 minutes, 3.43 seconds. Running with their same foursome that captured the NCAA Indoor crown earlier this year, the Tigers took the tape ahead of Oregon’s 3:03.80 with a team of junior Quincy Downing (46.46), sophomore Darrell Bush (46.10), sophomore Cyril Grayson (45.84) and junior Vernon Norwood (45.04).

“We’ve done everything we needed to do to this point to give ourselves the best opportunity to compete over the final two days of this NCAA Championship,” Shaver said. “We just have to keep it going tomorrow for what will be the sixth day of a seven-day NCAA meet. Our athletes are prepared and ready to do their very best when we come back for another day.”

Like Lady Tiger All-American Denise Hinton did on Wednesday, Tiger junior Jeremy Tuttle kicked off the action by stepping into the hammer cage as he threw a series-best of 206 feet, 4 inches for 16th place overall.

Junior Joshua Thompson crossed the finish line with an effort of 14.22 (+0.0) for eighth place in the first heat and 20th place overall in the semifinal round of the men’s 110-meter hurdles , while senior Toshika Sylvester finished in 23rd place overall in the women’s 200-meter semifinals with her run of 24.25 (-0.2) for eighth place in the third heat.

The Tigers and Lady Tigers have six finals on tap during Friday’s action as the 2014 NCAA Division I Outdoor Track & Field Championships continue at Oregon’s Hayward Field. Senior Lynnika Pitts kicks it off with her start in the women’s triple jump at 5:25 p.m. CT followed by junior Rodney Brown in the men’s discus throw at 6 p.m. to highlight the day’s field events.

ESPNU will feature a live television broadcast of Friday’s action at Hayward Field from 6:30-8:30 p.m., while fans can also watch the Tigers and Lady Tigers in action during that time on Watch ESPN. Flash Results features live results throughout Friday and Saturday on http://flashresults.com, while fans can also receive live updates of the Tigers and Lady Tigers by liking LSU Track & Field on Facebook on http://facebook.com/lsutrackfield and by following @LSUTrackField online at http://twitter.com/lsutrackfield.