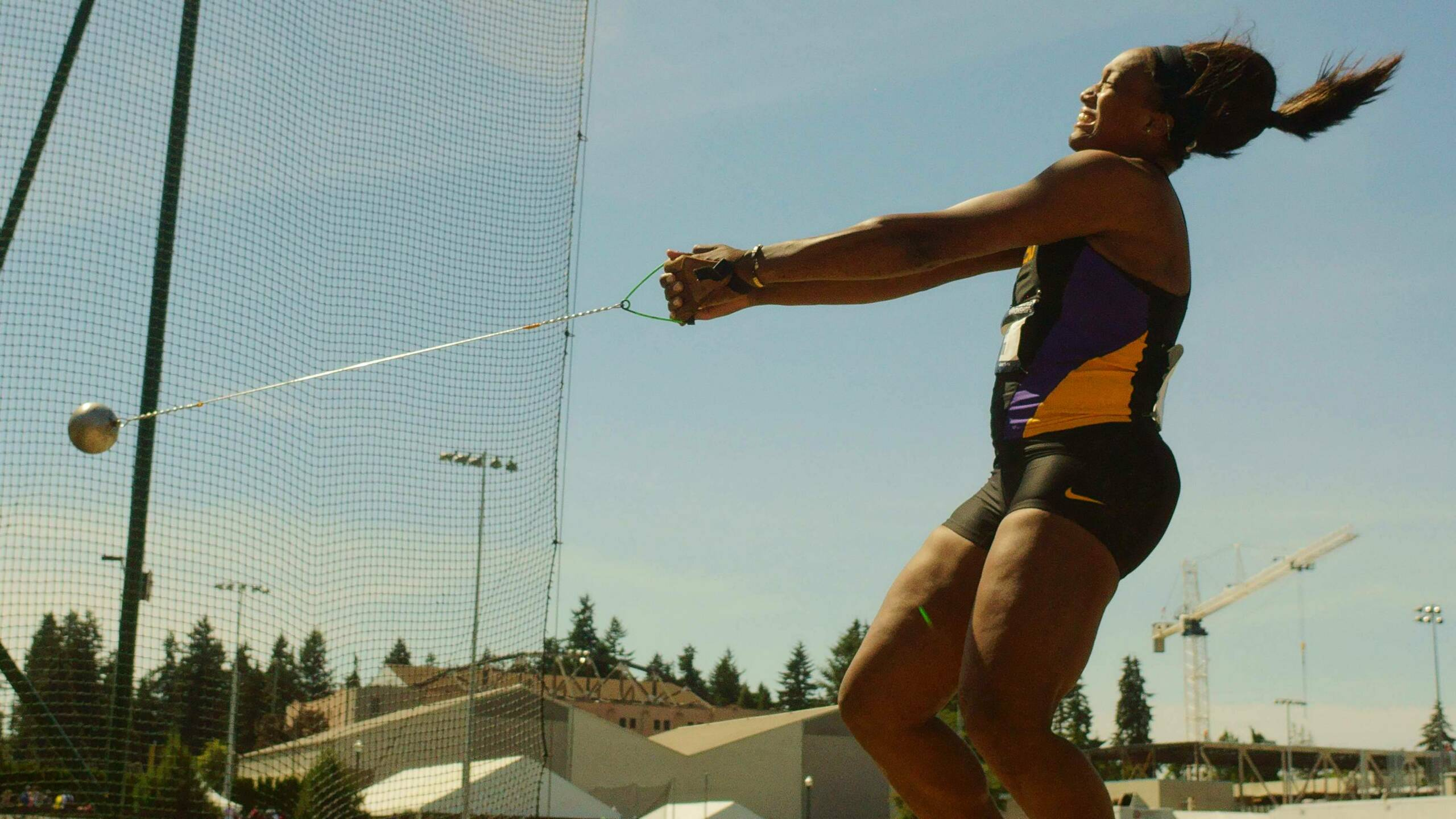 EUGENE, Ore. – While stepping into the ring for the final time at the collegiate level, senior Denise Hinton wasted no time in putting the Lady Tigers on the scoreboard at the 2014 NCAA Division I Outdoor Track & Field Championships as she earned a fifth-place finish in the women’s hammer throw in the first final of Wednesday’s opener at Oregon’s Hayward Field.

Hinton made history as she became the first Lady Tiger in program history to earn All-America honors in the women’s hammer throw with her top throw of the day at 210 feet, 9 inches on her final attempt.

Matching her indoor performance when she earned her first career All-America honor with a fifth-place finish nationally in the women’s weight throw at the NCAA Indoor Championships, Hinton scored four points for the Lady Tigers with another impressive fifth-place finish in Wednesday’s hammer final to kick start a strong day for LSU.

After qualifying for the final in seventh place with back-to-back throws of 207-0 in the second round and 207-7 in the third round of the semifinals, Hinton remained in seventh place with no improvement in the fifth or sixth rounds. With her final throw as a collegian, Hinton moved up two spots with a series-best of 210-9 as she passed Oregon’s Jillian Weir (209-7) and Kansas State’s Sara Savatovic (209-4) for fifth place.

With seventh-place already assured and realizing she had nothing to lose, Hinton said she was able to just relax and have fun with her last throw as a Lady Tiger to go out as an All-American.

“On my last throw, my coach (Derek Yush) just came over and told me to have fun with it. I was already an All-American at that point, so there was really nothing for me to lose. I pushed it a little harder and it went just a little bit farther for me. I just went back to the basics,” Hinton said. “I was maybe a little bit nervous coming into the event, but like Coach (Dennis) Shaver said in our team meeting this morning, it’s just a track meet. I wanted to come out here for myself and my teammates and do the very best I could as always.”

Hinton’s All-American put the finishing touches on one of the most decorated careers for a thrower in the history of the Lady Tiger program as she goes out as a two-time All-American as a senior. She also claimed four All-SEC honors during her career, including back-to-back SEC Indoor titles in the weight throw and back-to-back SEC silver medals in the hammer throw in 2013 and 2014.

The Tigers and Lady Tigers will certainly add to Hinton’s score later this weekend after combining for six finalists advancing from Wednesday’s semifinal races on the track on the meet’s opening day at Hayward Field.

LSU’s 4×100-meter relay teams got the Tigers and Lady Tigers off to a fast start in Wednesday’s semifinals as both advanced to the national finals after lining up in the first events on the track.

The Tigers were the first to step onto the track for the second of three semifinal heats in the men’s 4×100-meter relay as junior Joshua Thompson, junior Aaron Ernest, sophomore Nethaneel Mitchell-Blake and senior Shermund Allsop crossed the finish line in 38.85 seconds to finish runner-up to  a winning run of 38.60 by Texas A&M in the heat.

The Tigers, fourth-place finishers in the NCAA final a year ago, earned a return trip to the national final again this year with the third-fastest time on the day as they also trailed Florida’s winning time of 38.77 in the third heat. Also advancing to the men’s sprint relay final were Southern California (39.08), Western Kentucky (39.18), Iowa (39.19), Arizona State (39.26) and Alabama (39.36).

The Lady Tigers followed by lining up in the second of three semifinals in the women’s 4×100-meter relay as senior Jasmin Stowers, freshman Rushell Harvey, freshman Jada Martin and freshman Nataliyah Friar posted their third-fastest time of the 2014 season at 43.95 to finish just a split-second behind the heat-winning time of 43.94 by the Ohio State Buckeyes.

Tiger junior Quincy Downing headlined LSU’s individual qualifiers with a heat-winning performance in the third semifinal heat of the men’s 400-meter hurdles as he finished just a split-second off of his personal  best at 50.55 to take the tape ahead of Texas-San Antonio’s Keyunta Hayes (50.68) with the fifth-fastest time of the day.

Downing has continued his momentum from the NCAA East Preliminary Rounds held two weeks ago in Jacksonville, Florida, when he clocked a personal best of 50.49 in the quarterfinal round. The Ohio native will have a chance to run in his first NCAA final in an individual event on Friday night when the men’s 400 hurdles is scheduled to run at 6:33 p.m. CT.

“I just knew, like I’ve been saying lately, that I have a lot of speed and endurance coming from the 800,” Downing said of his experience as an 800-meter runner earlier in his career. “Coming down the stretch, the guys didn’t look like they didn’t have the energy left. I just kept my composure and made sure to get over that last hurdle. I knew if I did those two things, I could beat them. That’s what happened.”

Two Lady Tigers will also line up in Friday’s national final of the women’s 400-meter hurdles as senior Nikita Tracey (56.44) and sophomore Chanice Chase (57.14) both finished runner-up in their semifinal heats.

Also qualifying automatically for the NCAA finals with a runner-up finish in his heat was Tiger junior Vernon Norwood, who crossed the finish line with a time of 45.52 for second place in the second semifinal heat of the men’s 400-meter dash. He trailed Pittsburgh’s Brycen Spratling (45.41) with the fourth-fastest time of the afternoon among the field of 24 semifinalists in the 400 meters.

Ernest just missed earning a spot in his third-straight NCAA final in the men’s 100-meter dash when he clocked a wind-aided 10.13 (+2.3) for fourth place in his semifinal heat that proved to be the eighth-fastest time in the field. But it was the third-fastest time among those finishing outside the Top 2 in each of the three heats as he missed advancing on time by one spot.

In other action, Friar returned to action by jumping a wind-aided series-best of 20-2 ¼ (+2.1) on her opening jump to earn a 13th-place finish in the women’s long jump in her debut at the NCAA Outdoor Championships as a true freshman. Harvey clocked a wind-aided 11.49 (+2.3) for 20th place overall in the women’s 100-meter dash, while fellow freshman Rebekah Wales threw 154-2 for 19th place in the women’s javelin.

“What a great day for both of our teams to really jump start our week,” said LSU head coach Dennis Shaver. “We really couldn’t have asked for a much better day overall. It was great to see that Denise (Hinton) got us going early on, and it just went on from there. We probably would have liked to see Aaron (Ernest) get through in the 100, but with the way qualifying is done here, you have to be top two in the heat to make sure you get through. Everybody else that we needed to get through on the track made it through.

“That’s now four days of this seven-day NCAA Championship that are in the books. We’ve done just about all that we can do to this point, so now we look forward to coming back on Day 5 tomorrow.”

Thursday’s action at the 2014 NCAA Division I Outdoor Track & Field Championships kicks off for the Tigers and Lady Tigers at 3:30 p.m. CT as junior Jeremy Tuttle steps into the circle for the men’s hammer throw. Track semifinals are set to begin at 6 p.m. as Ernest looks to bounce back quickly while lining up among the favorites in the men’s 200-meter dash.

ESPN3.com will feature live streaming video of Thursday’s events from 5:55-10 p.m. CT at http://es.pn/S8EHfu. Fans can also receive live updates of the Tigers and Lady Tigers competing throughout the event for liking LSU Track & Field on Facebook at http://facebook.com/lsutrackfield and by following @LSUTrackField on Twitter at http://twitter.com/lsutrackfield.