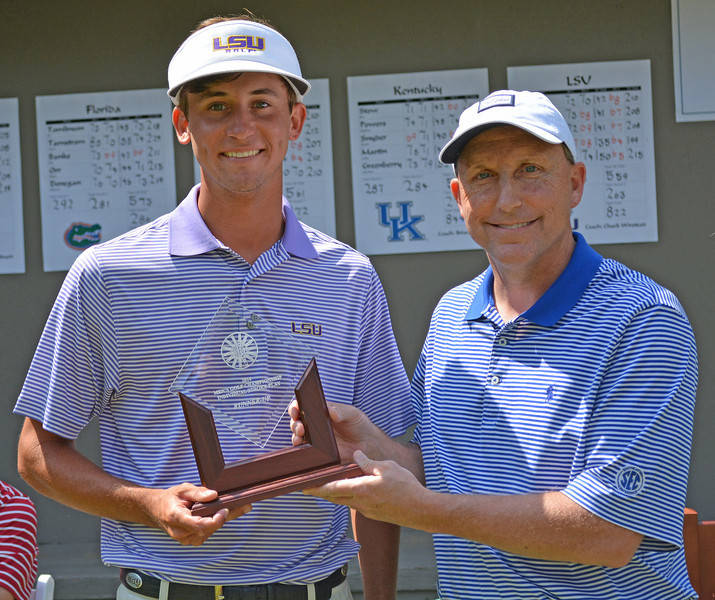 ST. SIMONS ISLAND, Ga. – The 22nd-ranked LSU Tigers lit up the par-70 Seaside Course at Sea Island Golf Club in Sunday’s final round with a school-record round of 17-under par 263 to catapult themselves into second place in the final team standings at the 2014 Southeastern Conference Men’s Golf Championships for their best team finish in the event in 25 years.

With senior Smylie Kaufman leading the way once again with a brilliant 6-under par 64, the Tigers smashed their previous school-record round in relation to par by four shots with a 17-under par 263 on Sunday and a 54-hole tournament score of 18-under par 822 to follow only the No. 1-ranked Alabama Crimson Tide across the finish line.

The Tigers earned their best team finish at the SEC Championships since they last finished runner-up in LSU great David Toms’ senior year in 1989, while they came up short in winning their first SEC title since 1987.

Alabama entered the weekend as the consensus No. 1-ranked team in the country and stormed to its third-straight SEC Championship with a tournament-record score of 34-under par 806, including its 12-under 268 in Sunday’s final round. The Crimson Tide have now won five SEC team titles in their program’s history to rank fourth all-time among SEC schools.

LSU’s 18-under par 822 is the lowest non-winning score for 54 holes in the 75-year history of the SEC Men’s Golf Championships as the Tigers finished 16 shots off the pace in the race for this year’s SEC title. It also smashes their previous best team round in relation to par of 13-under par 275 in the first round at the 2009 Gary Koch Invitational.

No. 26-ranked Auburn trailed in third place in the 14-team field with a final score of 11-under par 829, while No. 6-ranked Georgia followed in fourth place at 7-under par 833 and No. 24-ranked South Carolina ended up in fifth place at 2-under par 838 to round out the top five of the team standings.

“Obviously it was a great round by our team today,” said LSU head coach Chuck Winstead. “All five guys played very well. You’ve got to have that type of production throughout the lineup to be successful at this point in the season. It is great to see us continue to improve and build momentum with our play this weekend at Sea Island.”

Kaufman led the way for the Tigers from start to finish at this year’s SEC Men’s Golf Championships as he followed outstanding rounds of 3-under 67 on Friday and 2-under 68 on Saturday with the lowest score with his LSU career at 6-under 64 on Sunday for a career-low tournament score of 11-under 199 to finish as the SEC silver medalist in his SEC Championships debut.

An LSU Tiger has now finished as the SEC runner-up twice since 2011 when former NCAA Champion and rising PGA TOUR star John Peterson scored the SEC silver medal during his senior season with the Tigers.

Kaufman’s bogey-free final round was highlighted by a run of five-straight birdies in the middle of his round as he followed his first birdie of the day on the opening hole by reeling off consecutive birdies at the par-five seventh, par-four eighth, par-four ninth, par-four 10th and par-four 11th holes en route to a team-leading 6-under 66 on the afternoon. Kaufman became the first Tiger to shoot a 64 in a round since former All-American Greg Lesher did so at the 1989 Gator Invitational held at Florida’s University Course.

Only once has Kaufman finished a round better in relation to par when he fired a career-low 7-under 65 at the Argent Financial Classic held at Squire Creek Country Club in Choudrant, La., during the 2012 spring season.

Kaufman finished seven shots back of Alabama’s Bobby Wyatt as the Crimson Tide All-American wrapped up medalist honors with a 4-under 66 in the final round for a championship record of 18-under par 192 over the three days of competition. Wyatt’s weekend also included an SEC Championships record round of 9-under par 61 in the second round on Saturday afternoon.

Alabama’s Robby Shelton followed in third at 10-under 200 and Mississippi State’s Chad Ramey took fourth at 6-under 204, while Kentucky’s David Snyder and Texas A&M’s Greg Yates tied for fifth at 5-under 205.

A native of Birmingham, Ala., Kaufman is now the fourth LSU Tiger in six years to crack the Top 5 of the final leaderboard at the SEC Championships after Peterson finished in third place in 2009 and second  place in 2011 and former LSU All-American and fellow PGA TOUR rookie Andrew Loupe tied for fourth place during the event in 2010.

“Smylie really had a great week,” Winstead said of Kaufman’s performance. “We’re very proud and happy for Smylie. He has played a major role in our teams improvement this spring.”

Tiger sophomore Zach Wright nearly matched Kaufman’s effort in the final round as he also carded six birdies on the day along with a single bogey to fire his lowest round of the season at 5-under par 65.

Wright rebounded from rounds of 6-over 76 on Friday and 4-over 74 on Saturday to climb into a tie for 36th place on the final leaderboard with a  54-hole score of 5-over par 215 on the weekend. Wright quickly dropped to 2-under par on his round with a pair of birdies at the par-three third and par-four fifth holes before making back-to-back birdies at No. 7 and No. 8 to make the turn at 4-under par. He gave a shot back with his bogey at the par-three 12th hole, but bounced back with consecutive birdies again at the par-four 14th and par-five 15th holes for a 5-under 65 on the day.

Juniors Ben Taylor and Curtis Thompson matched one another shot-for-shot in Sunday’s final round while adding scores of 3-under par 67 toward LSU’s final team total. They also finished in a tie for 13th place overall on the final leaderboard with matching tournament scores of 2-under par 208 to help lead the Tigers to their best team finish at the SEC Championships in more than two decades.

Thompson claimed his best career finish at the SEC Championships after tying for 15th place as the top Tiger a year ago, while Taylor tied for 13th place in his championship debut in his first season with the program.

Senior All-America hopeful Stewart Jolly finished at level par for the weekend as he capped the championship by firing a 2-under par 68 on Sunday for a three-day total of even-par 210. Like Thompson, Jolly also scored his best career finish at the SEC Championships as he tied for 21st place on the final leaderboard this weekend.

The Tigers now await their seventh-straight NCAA Regional selection as the field for the 2014 NCAA Men’s Golf Regionals will be announced on Monday, May 5, from 9-10 a.m. CT on Golf Channel’s Morning Drive show live. LSU will be looking to qualify for the 30-team field at the NCAA Division I Men’s Golf Championships for the fourth time in five seasons with a top-five team finish in NCAA Regional play.